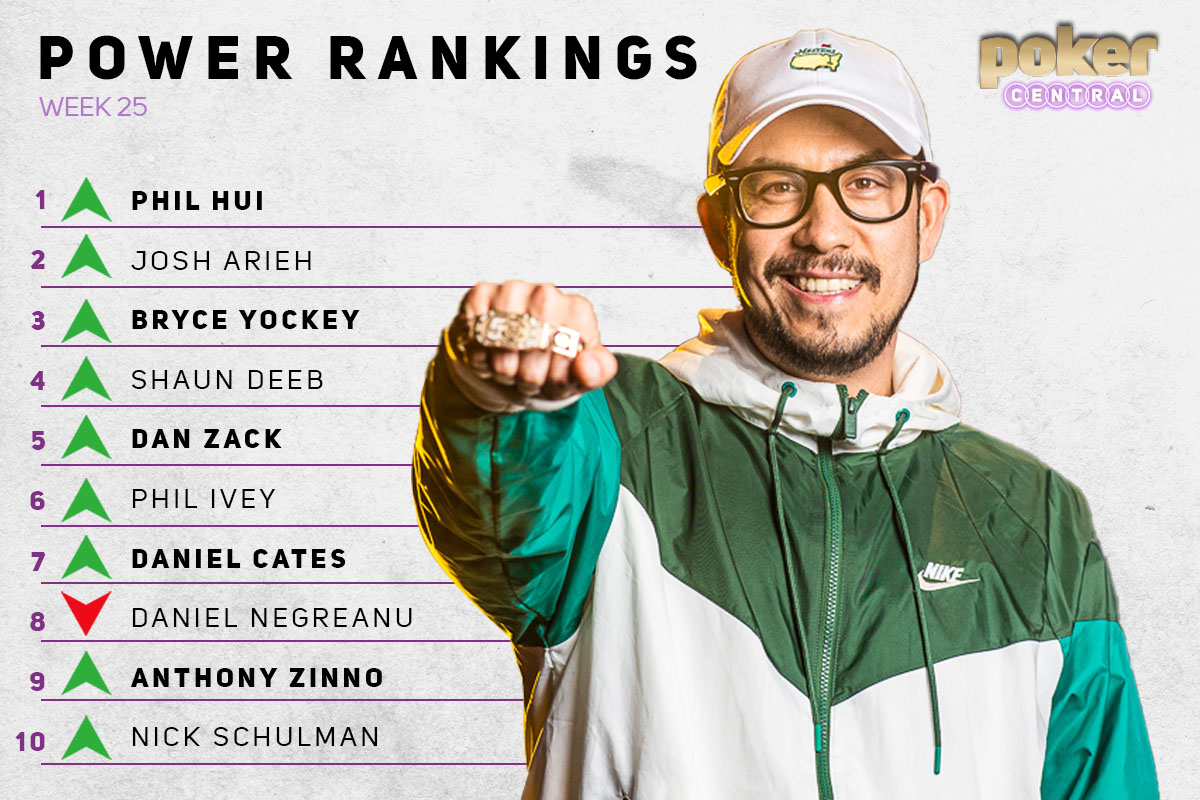 The Poker Central Power Rankings got another massive shake-up as the $50,000 Poker Players Championship dominated the headlines! Phil Hui grabbed the biggest win of his career after beating Josh Arieh heads up. Bryce Yockey jumps into third place on the rankings after being on the receiving end of the worst bad beat in poker history while Dan Zack is seemingly the only player to hold steady in the Top 10 with Daniel Negreanu this summer.

Seemingly out of nowhere Phil Hui became a massive poker sensation after years of grinding. Winning the $50,000 Poker Players Championship is a bit different than any other bracelet in the world and now his name is forever on the David ‘Chip’ Reese Memorial Trophy. Read the full story of his win below.

Tears of Disbelief: Phil Hui Puts His Name Among The Greats

His name has been a big one in poker ever since his third-place finish in the 2004 WSOP Main Event but this week he got very close to being remembered for something completely different! Arieh notched up the third biggest score of his career in the $50,000 Poker Players Championship and that puts him second on the rankings this week.

What else is there left to say? Just watch the video below!

Shaun Deeb keeps stringing together results like it’s nothing! The defending WSOP Player of the Year champ is continuing his strong pursuit for another bracelet and title defense, but for now, he’s got to settle for a bunch of close calls. Deeb has 12 total cashes so far, three final tables and one runner-up finish in the $10,00 Dealer’s Choice to Adam Friedman.

Aside from a few days where Upeshka De Silva grabbed the WSOP Player of the Year lead, Dan Zack has been on top for almost the entire summer. Despite strong surges by those going deep in the $50k, Zack remains on top with plenty deeper runs on his sleeve.

Was it a blow-up? Was it an honest mistake? Did he realize that he was playing Stud Eight-or-Better? Phil Ivey had a shot at winning the Poker Players Championship and he blew it!

He loves Razz and we love him, Dan ‘Jungleman’ Cates made headlines this week as he called his shot in the $50,000 Poker Players Championship. Destiny Dan came very close to winning but ultimately fell short in sixth place for his best result ever in a WSOP event.

Dan ‘Jungleman’ Cates: “The Legend of Destiny Dan is Born as We Speak.”

So close, once again! Daniel Negreanu fell short of a bracelet in the $10,000 Razz Championship when he busted out in sixth place. So far, Negreanu has worked his way up to 13th on the Player of the Year race with 11 cashes, three final tables, and one runner-up finish to John Hennigan in the $10,000 Stud Championship.

Anthony Zinno: “I Want to Play Poker my Whole Life.”

Let it be known that the rankings were due at midnight on Sunday when we didn’t know what was going to happen at the final table fo the $10,000 Pot Limit Omaha Eight-or-Better event! Nick Schulman, as we speak, is at that final table and could snag his third career WSOP bracelet. Oh, and his commentary on the hand posted under Bryce Yockey in this article is also worth a lot of points!