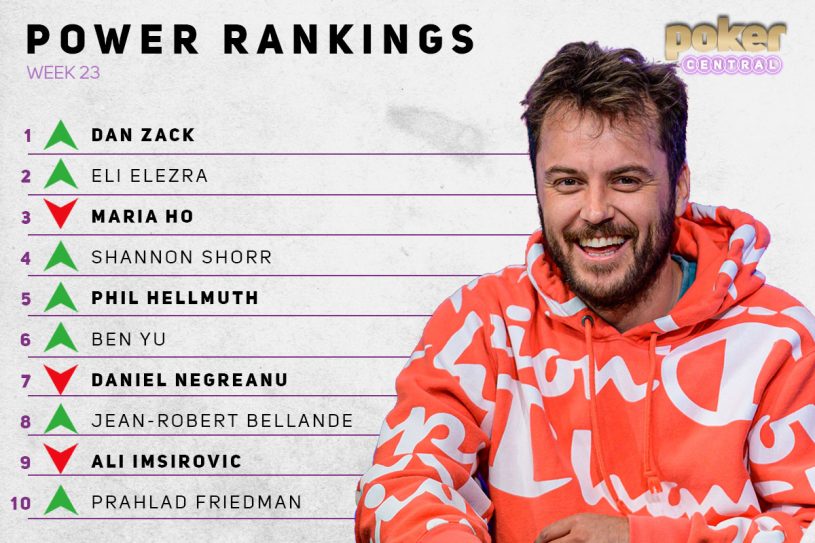 A total of 25 events have wrapped up at the 2019 World Series of Poker and as there are still 65 more bracelets to be awarded in Las Vegas before the most exciting stretch of poker action ends. The Power Rankings keep chugging along as the current clubhouse leader when it comes to the Player of the Year race, Dan Zack, has grabbed the No. 1 spot while Eli Elezra jumped into second place with Shannon Shorr, Prahlad Friedman, and Jean-Robert Bellande

He leads the World Series of Poker Player of the Year race after 25 events, has won a bracelet and six total cashes so far. Nuff’ said.

Another year, another bracelet for Eli Elezra! The poker lifer took home his fourth bracelet earlier this week when he beat three-time World Poker Tour champ Anthony Zinno heads up in the $1,500 Seven Card Stud event for $93,766. Congrats on another win, Eli!

Still chasing her first massive win at the World Series of Poker, Maria Ho lost a heap of points this week but the general consensus remains that she deserves a spot in the Top 10. Maria’s streak of 13 straight weeks in the Top 10 might never get broken if she keeps performing well at the tables and on social media. This week, Maria provided great commentary with Ali Nejad on the final table of the Milly Maker, relive that final table on PokerGO right now.

Tweet me any questions you may have about and I’ll try to answer some on air! https://t.co/U19ULzEH4o

Falling just short of his first bracelet win, finishing in second place behind Daniel Strelitz, got Shannon Shorr a lot of love from the rankers. Added to that is his appearance this week on the Poker Central Podcast where he told some epic stories that you will get to hear all about later today!

Phil Hellmuth made an epic appearance on the Poker Central Podcast last week and that alone was worth ranking him very high. In addition to that, Hellmuth made another deep run at the WSOP where he battled hard in the $1,000 No Limit Hold’em event placing 16th out of 2,477.

Ben Yu is an animal, in the best sense of the word. Yu is a contender for WSOP Player of the Year, as he fell just short of the bracelet in the $10k Heads Up Championship, while also keeping an eye on the ARIA High Roller late registration.

Another week, another seven vlogs! While his results have not been on fire just yet, Negreanu’s vlogs have been amazing entertainment for fans all over the world. In addition to that, he managed to get Phil Ivey in front of the cameras!

Sound the alarms, JRB is in the rankings for the first time in 23 weeks, and it’s about damn time. When Jean-Robert isn’t stuffing 5-high all-in preflop, he’s making WSOP final tables and burying his muzzle in luxury wine. Soon to be father, I wish JRB the best throughout this summer.

The bluff was good, the speech was better. @BrokeLivingJRB is bossing the $10K NL 2-7 final table LIVE on PokerGO: https://t.co/6DynX5eOQM #WSOP50 pic.twitter.com/VI08uKJCZk

Dropping to ninth place this week, Ali Imsirovic is finally on his way out of the rankings are five very strong weeks. This probably also means that he’s due another six-figure score to bump back to his comfortable fourth-place where he sat the last four weeks. Since May 21st, Imsirovic has nine cashes in Las Vegas of which eight are Top 5 finishes.

Our house poet, Brent Hanks, also has some great words for Phralad Friedman: “Consider my spirit, rocked. Having Prahlad back at the WSOP and chasing the gold glory is one of the most refreshing moments thus far. The only thing missing from Prahlad’s return? Freddy Lisandro. Making Pragress and his debut in the Power Rankings was a no brainer this week, and I can’t wait to see what Prahlad has in store for the rest of the series. It’s gonna be a great summer.”