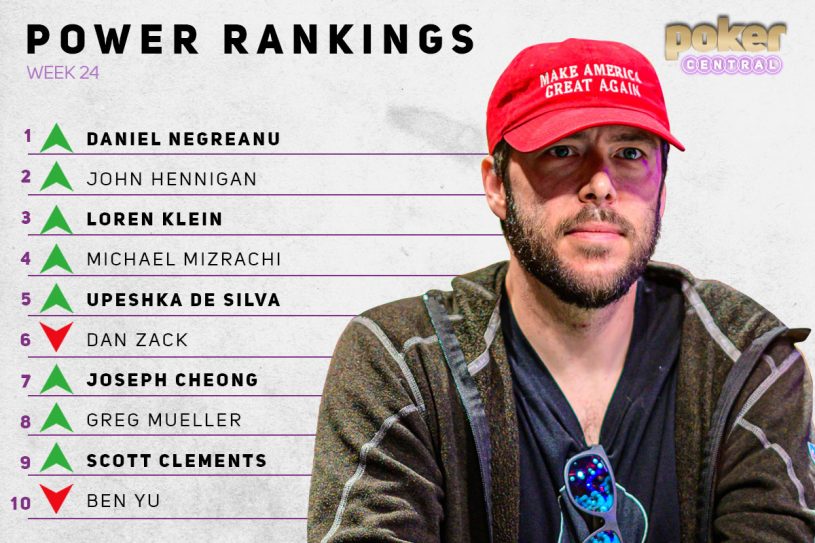 Loren Klein wins a bracelet for the fourth straight year and jumps into third place on the Poker Central Power Rankings.

The action at the World Series of Poker is so hot and heavy that most bracelet winners aren’t even sniffing the Top 10! Since the inception of the rankings, we’ve never seen more unranked players jump into the Top 10 while Daniel Negreanu took over the first spot with Dan Zack dropping five spots after two weeks at the top. Let’s dig in!

Daniel Negreanu was one elimination away from winning his first WSOP gold bracelet in Las Vegas since 2011! Negreanu picked up some nice points in the progress for Player of the Year but overall he left the $10,000 Seven Card Stud Championship event with a sour taste in his mouth. Watch his Vlog for all the details.

This Poker Hall of Famer added more to his already legendary poker career by beating Daniel Negreanu heads up for the $10,000 Seven Card Stud title. Hennigan won his sixth career World Series of Poker bracelet in this event after winning the $50,000 Poker Players Championship in 2014. To emphasize Hennigan’s skill at all the games even more so, he’s also got a second and third-place finish in the $50k. Congrats, John! Watch the highlights of this final table on PokerGO right now.

Congratulations to the Irish stud playing animal from South Philadelphia PA, that's 6 now. Gets so iffy saying people are the best at this and that in poker but damnit ask around, when it comes to the studs perhaps never a finer player. Salud, chindon Flakes you crazy bastard pic.twitter.com/SkYq4Tuuea

Like it or not, the man who wears many controversial hats of which I am personally not a fan, is breaking records left and right. Loren Klein just became the third player in poker history to win a bracelet in four consecutive years, tying Bill Boyd and Doyle Brunson who did this more than 40 years ago. Klein took down the $2,500 Big Bet Mixed event for $127,808 to bring his career total to just shy of $3 million.

The Grinder is a legendary player in his own right, winning his fifth career WSOP bracelet in the $1,500 Seven Card Stud Eight-or-Better event for $142,801. To date, Mizrachi won the $50k Players Championship three times as well as a big €10,000 Mixed No Limit Hold’em in Cannes and he now also has a “small” bracelet on his resume to compliment the big ones.

Congrats to the twin @TheGrinder44 winning his 5th @WSOP bracelet! So amazing and so proud of him! #TeamMizrachi #WSOP pic.twitter.com/ffiz7uKMPA

Upeshka De Silva leads the 2019 World Series of Poker Player of the Year rankings after winning his third career bracelet in the online event. As a joke, Upeshka goes by Bob to his close friends, and right now things are looking very good for Bob from Texas!

After a quiet week for Dan Zack’s standards, one of the front runners for the World Series of Poker Player of the Year honors drops five spots to No. 6. Zack now has nine cashes including his first ever bracelet.

Joseph Cheong won his first ever World Series of Poker bracelet and followed that up by one of the funniest Tweets of the summer so far. Cheong took home more than $687k for his win along with some new Twitter followers.

Don’t call it a comeback! Greg ‘FBT’ Mueller won his third career World Series of Poker bracelet after snagging two back in 2009. Mueller did all this on PokerGO in the $10,000 H.O.R.S.E. Championship which you can relive in full right now.

That's how you finish a comeback! @GregFBT wins the $10K H.O.R.S.E. Championship for his 3rd @WSOP bracelet! 🐎💪🥇 https://t.co/6DynX5eOQM #WSOP50 pic.twitter.com/SmR6lqWzgO

Halfway through the World Series of Poker, it’s Scott Clements who’s one of the top contenders for the Player of the Year honors. Clements currently sits in third place after a win and a fourth-place finish in the $10,000 H.O.R.S.E. Championship.

Ben Yu continues to dazzle both at the Rio and ARIA where he’s mixing it up between High Roller and World Series of Poker cashes. With the points that he’s currently gathered, Yu sits 23rd on the Player of the Year standings and that slots him in one spot behind Daniel Negreanu and well within striking distance of the top.

Be yourself. Unless you suck. Then, become awesome instead.