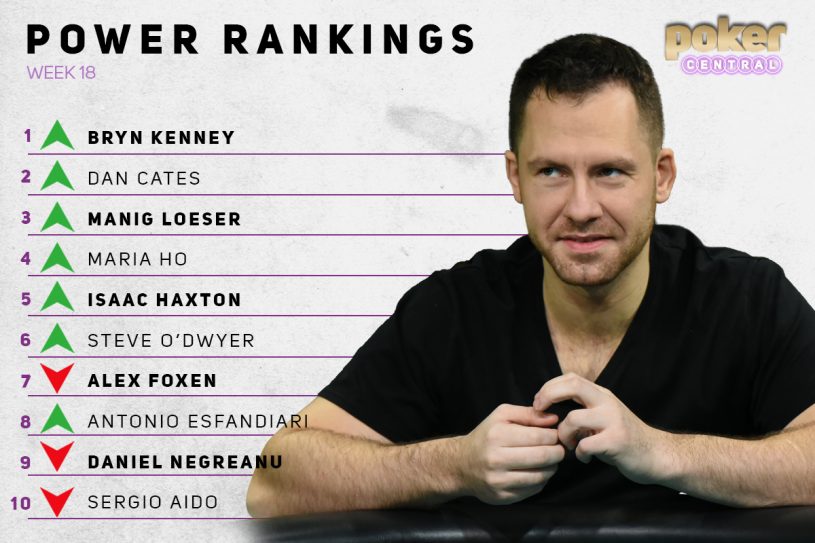 Daniel 'Jungleman' Cates released what could be considered the spiciest video in poker and it places him second on the current rankings!

This week is filled with winners in poker through various methods! While Manig Loeser and Bryn Kenney were dominant on the felt, Dan ‘Jungleman’ Cates dominated the social media conversations by dropping an epic video that had Twitter in a tailspin. This week, we see Maria Ho climb up a few spots again while Alex Foxen, Daniel Negreanu, and Sergio Aido drop down but they maintain a spot in the Top 10. New in the Top 10 are Isaac Haxton, Steve O’Dwyer, and Antonio Esfandiari.

All he does is win. After a few quiet weeks, Bryn Kenney is back on top with another massive win. This time it was a high roller win for $1.4 million at the Triton Poker Series in Montenegro. At the most recent Triton Series, Bryn finished second in the Main Event for $3 million and after winning a U.S. Poker Open event for $450,000 and the Aussie Millions Main Event for $915k, he’s now sitting on $6.5 million for the year already! This year now only trails his stellar 2017 campaign where he raked in $8.5 million when it was all said and done.

Would we dare to embed the Tweet that had the whole poker world in a tailspin? Nah. We’d link to it (NSFW), but to get a better sense of the sentiment without getting into NSFW territory, watch Kristy Arnett’s reaction to it. Jungleman does only Jungleman does and sources have told us that his year has been stellar both on and off the table and we wouldn’t pull that into question even once! Cates is at the top of his game and we wouldn’t be surprised if there was plenty more to come so stay tuned to his Twitter and Instagram pages.

German pro Manig Loeser has been on the cusp of massive results in large field Main Events plenty of times but for the first time ever he closed one out last week. Loeser took down the EPT Grand Final Monte Carlo event for $678,393 which is not his biggest score but it might be his most prestigious win. Loeser’s biggest score remains the Triton Super High Roller Main Event in 2017 for $ 2,162,644.

That winning moment. 🥇
Congrats to @swordfish007, this is how he took down the #EPTMonteCarlo Main Event, winning €603,777. 🏆 pic.twitter.com/ErmobtuKYf

The Maria Ho hype train shows no signs of slowing down! Despite dropping in points for the third straight week, Ho climbed two spots as the voting was very heavily focused on the Top 3 this week. Ho was in the news once again as Kitty Kuo was busy preparing to be her biggest fan at the upcoming WPT Hard Rock Poker Showdown final table.

While not as big a winner as the other players listed, Isaac Haxton has racked up some consistent results these last two weeks to get him noticed! Haxton recorded a fifth and a sixth place in Monte Carlo high rollers before finishing second twice in Montenegro so far at the Triton Series. Haxton finished second to O’Dwyer in the HKD$250k for $369k and followed that up with another second place to Winfred Yu.

Quietly 11th on poker’s all-time money list, Steve O’Dwyer might be one of the most under the radar crushers in the entire tournament scene. O’Dwyer’s absence from the American tournament scene has hindered his fame but we’re sure that he couldn’t care less about that as he keeps raking in the money! After a few close calls in Monte Carlo, O’Dwyer took down HKD$250k in Montenegro.

It’s been a quiet week for Alex Foxen but with a good stack in the Triton Poker Series Main Event, we might be looking at another massive result for the No.1 on the Global Poker Index. Foxen has held the No. 1 spot for 31 weeks now and that’s a new record!

It might’ve been the biggest failure in Poker Central Power Rankings history, not ranking Antonio Esfandiari last week. Esfandiari beat up Kevin Hart in an epic half a million dollar boxing match, a truly epic feat! We somewhat corrected that failure this week as voters were quick to respond to the public outcry. Esfandiari, however, might’ve lost out on a No. 1 spot!

Every emotion known to man flowed through my veins as I walked out to face @kevinhart4real in the ring.

Dropping quite a few spots on the list, Daniel Negreanu stays in the Top 10 but just barely. Negreanu fired away more big Tweets but the biggest thing of all was his appearance on the Poker Central Podcast where he went hard against Shaun Deeb and dropped some great stories from the past.

The Spanish crusher recorded the biggest score of his career a week ago in Monte Carlo and currently, he’s on his way to do more damage in Montenegro during the Triton Series events. Aido is a quiet guy who lets his chips do the talking and with $10.7 million in total career earnings, he’s doing a fantastic job!

Barely missing out on the Top 10 this week are Benjamin Pollak, Rainer Kempe, Phil Galfond, Seth Davies, and Joey Ingram.