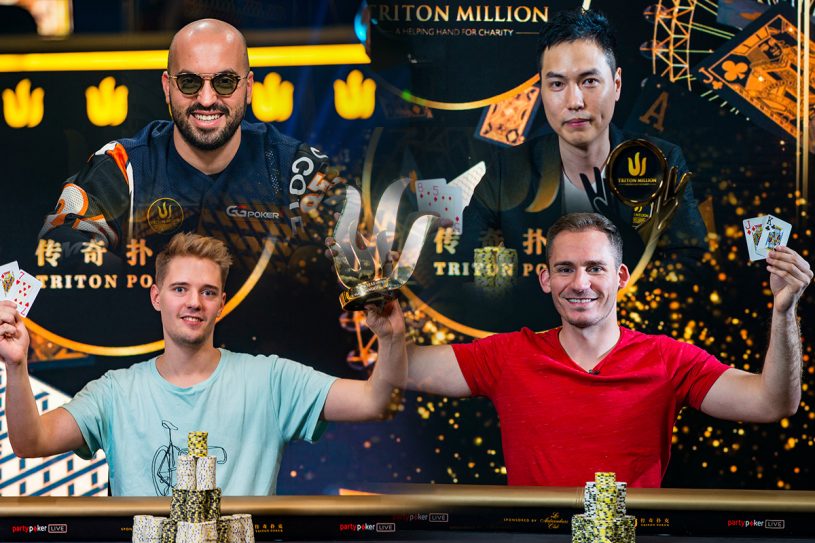 Bryn Kenney, Aaron Zang, Linus Loeliger, and Justin Bonomo were among the biggest winner at the Triton Super High Roller Series in London.

After nine days of awesome action, the Triton Poker Super High Roller Series has concluded at the London Hilton on Park Lane. With players such as Charlie Carrel, Aaron Zang, and Wai Kin Yong winning life-changing money and a new player leaping to the top of the all-time money list, the Triton Poker Series once again showed it belongs among the most prestigious events on the poker calendar.

Swiss player Linus Loeliger was the slightly unfamiliar name to become the first champion in London, after overtaking players such as Claudio Rinaldi, Besim Hot and Chris Bigler in two huge results. After winning the opening £25,000 6-Max NLHE event for £690,000, overcoming Luc Greenwood heads-up on a final table that included tough players such as Timothy Adams, Cary Katz, and Elior Sion, Loeliger came third in the third event of the series, the £50,000 entry 8-Max NLHE. Impressive.

🥇 Congratulations to the third winner of #TritonLondon2019 Linus (LLinusLLove) Loeliger 🇨🇭, taking down the £25k NLH 6-Handed Turbo event and collecting a sweet £690,000! This is already Linus' second cash in just two events 🤑

Aaron Zang took down the record-breaking £1,050,000-entry event, beating Bryn Kenney to first place but he did not capture the top prize after a deal was done before heads-up began. While Kenney’s rise to the top of the all-time money list was something for the books, in winning £13.7 million, Aaran Zang instantly became one of the biggest tournament poker winners in history. The Chinese “businessman” proved his poker chops on a final table featuring luminaries such as recent WSOP bracelet winner Stephen Chidwick, Dan Smith and Bill Perkins, who led for much of the opening two days of the event. While others came, however, Zang conquered, and his cash of over $16.7m in U.S. dollars makes up 95% of his career tournament earnings.

With a strong field, 66 entries and 43 re-entries, British player Charlie Carrel added yet another win to his already trophy-filled career with the £50,000-entry 8-Max NLHE event victory. Carrel had some of the toughest opponents in poker history for company in the event, with players such as Christoph Vogelsang, Isaac Haxton, and Daniel Dvoress all making the money. It would be Jason Koon who would prove to be Carrel’s final victim, as the British player closed it out for a score of £1.3m ($1.6m), the largest tournament cash of his career to date.

It might seem odd that with a million-pound event on the schedule, the £100,000 NLHE Event was classed as a Main Event, but that boast was backed up by a field of 130 players, a record at that level buy-in. The event was closed out by Wai Kin Yong, after he got the better of Paul Phua heads-up, but that only tells part of the story, with a deal between the two men effectively meaning they were playing for the trophy alone. Elsewhere, players such as Sam Greenwood, Michael Soyza and Charlie Carrel’s good friend in poker, British pro Ben Heath all ran deep. Phua received $3,107,828 for finishing as runner-up, while Yong took the title and $3,148,391.

With the gap at the top of the all-time money list opened up to $10 million in Bryn Kenney’s favor after the Triton Million event, Justin Bonomo managed to reign that in slightly as he won big with a Short Deck. In the first of the Short Deck events to round off the series, David Benefield took home £650,000 by triumphing against Richard Leng heads-up in the £25,000 NLHE Ante Only event. Next, it was Bonomo’s turn to be victorious again, this time from a position of deficit, having been third in chips with three players remaining. Bonomo got the job done in that £100,000-entry Short Deck Main Event, winning £2,670,000 and defeating Wai Yong heads-up. Finally, Xu Liang won the last and eighth event of the series, taking home £777,000 by beating David Benefield heads-up, denying him another Short Deck title in the £50,000-entry Ante Only Short Deck event.

Here’s a full list of the Triton Poker Results.