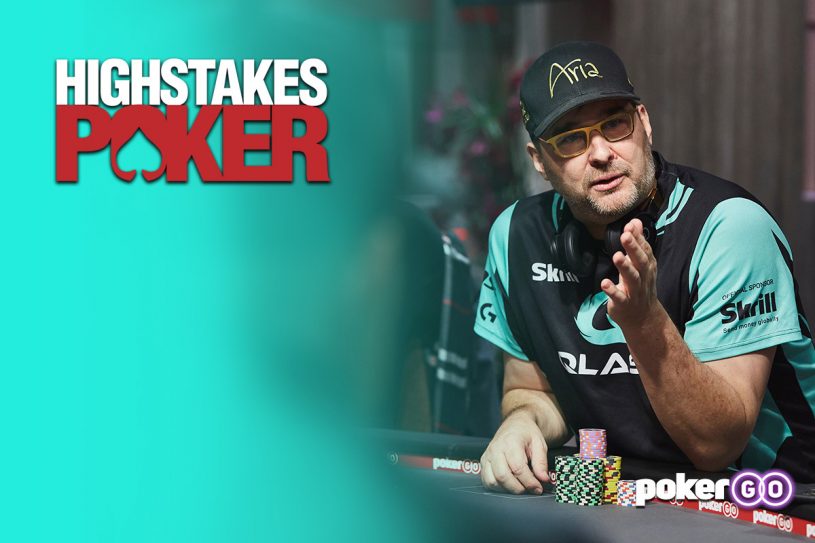 High Stakes Poker is returning for a new season on Wednesday, December 16, and among the players that will be making an appearance on Season 8 is “The Poker Brat” himself, Phil Hellmuth.

It can be argued that Hellmuth is one of the most accomplished poker players in the game. He has amassed over $24.1 million in lifetime tournament earnings which includes a staggering 15 WSOP bracelets – five more than Doyle Brunson, Johnny Chan, and Phil Ivey who each have 10. With all of Hellmuth’s success in the poker world, Hellmuth wasn’t a mainstay on High Stakes Poker during its first seven seasons.

Hellmuth appeared on only 15 episodes – which coincidentally ranks 15th among the 94 players in High Stakes Poker history. Hellmuth appeared in four episodes during Season 1 (2006), ten episodes in Season 4 (2007), and half an episode in Season 6 (2010) after he went broke to Phil Ivey on Episode 1. Hellmuth shoved the turn with a pair and straight draw, and Ivey looked him up with a superior flush draw which had turned top pair. The river blanked, and Hellmuth made a quiet exit stage left.

For someone as successful on the tournament stage as Hellmuth, it never carried over to High Stakes Poker. Hellmuth finished down overall across the 15 episodes he appeared on and was often ridiculed by fellow players, while also being the center of many jokes.

“I filmed some shows and I would come in super tired,” Hellmuth said about his first stint on High Stakes Poker. “I would come in completely unprepared. I wouldn’t have played for 3 months at a time, and I looked a little off and didn’t play my best and lost some money.”

“When I would play in the past they would tease me and it would bother me because I felt like I was the all-time great poker player and deserved more respect,” Hellmuth said. “They teased me and they saw that it would get to me, and they kept teasing me. And it kept working. This time I’m just ready to sit down and there’s going to be a lot more respect from the table. But even if they tease me, it doesn’t matter. I’m ready. I’m ready for all situations and I have a strategy that I think will be successful.”

Click here to read The Return of High Stakes Poker with Phil Ivey.

“The last 3 years I’ve won 24 of 25 times in televised cash games which is scary,” Hellmuth said on his change of fortune in televised cash games. “It’s a different world now and I’ve worked really hard to get here. I’ve always sold pieces of myself, and I’ve made all my friends a lot of money, and this time I’m taking 100% of myself because I deserve it. I’ve earned it.”

Over the past few weeks, and well into when episodes begin to air, rumors of the High Stakes Poker line-ups will continue to swirl. Ivey, Dwan, and Hellmuth are definite, but many old and new faces are still scheduled to appear on Season 8 of High Stakes Poker.

“I will say that this looks like the toughest game in history as far as you know me, Tom Dwan, and Phil Ivey. Just look at the players. I looked at it and a lot of my friends said it’s the toughest line-up they’ve ever seen.” Hellmuth said regarding the line-up of the night. “I have to be on my game, that’s the important thing. And it makes me excited and nervous. I’m there partly for ego, and partly because I’ve earned my seat at the table. I’ve earned that seat at the table, so I have to be there.”

“I’ve always felt that in the Bellagio and Bobby’s Room, there’s always a seat waiting for me for a long time. No one within five years of my age group is in there. You had Doyle [Brunson], then Chip [Reese], and it was supposed to be and some others. But I just decided that I’m going to make $100 million in business instead of poker because it’s a lot easier. So I went in a different direction, but I always felt like that seat was waiting for me and I’ve worked hard on my game. In 2018 we had a huge year, we had a company go public and we finally made $10 million or something. So I said, ‘Hey honey, every year I make a lot of money playing poker I’m going to start playing in the big games,’ but I just decided I didn’t want to lose $250,000 in one day, so I shied away from that until right now. Now we’re talking 2 years later and I decided now it’s time to risk my own money in these things. So I’m nervous that I’m risking my own money, I’m nervous because it’s one of the toughest line-ups I’ve ever seen, and I’m nervous because I have to prove myself to the poker world. So I’m there partly for ego, which you have to recognize because I want to show people that I’m great, and partly just because I’ve earned that seat and I need to be there.”

“This is a different feel, and I’m looking forward to trying to prove something to the world, and to myself,” Hellmuth said about being back on High Stakes Poker. “I’m comfortable in this line-up and I’m completely different. I’m older, more mature, and I’ve won a fortune in the last five years. I’m up a million this year and I’ve barely played. I’m in form coming off my win against Antonio [Esfandiari]. It’s time for me to just play my best.