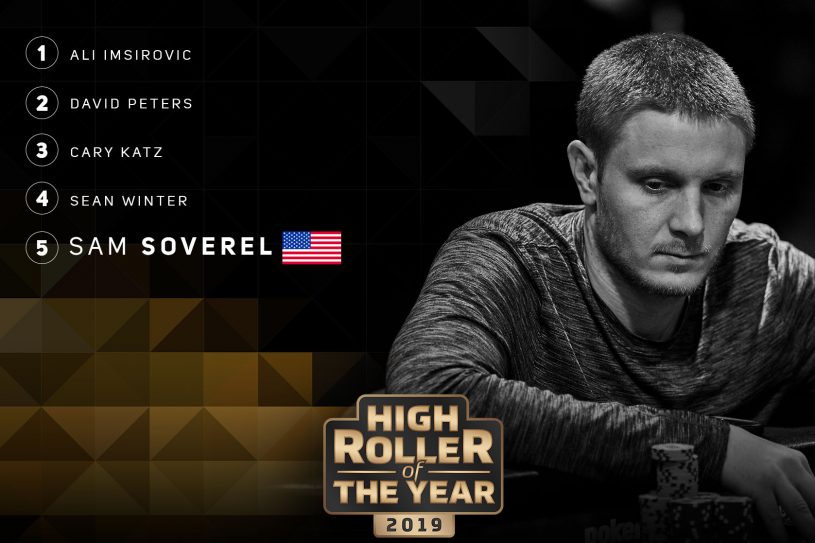 A strong start to Sam Soverel's summer has him back in the High Roller of the Year top-five. (Photo: Poker Central)

The World Series of Poker is in full swing and the 2019 High Roller of the Year race is starting to heat up. While the first ten events of the summer shook up the top-ten, Ali Imsirovic remains in front. The reigning Poker Masters champion is the first player to double-digit cashes and will likely become the first player to eclipse the 1,000 point mark when he records his next result.

The reigning High Roller of the Year sits on the other end of the top-five. Sam Soverel’s title defense started at the WSOP $50K High Roller final table and continued with a $25,000 ARIA High Roller win a few days later. Those two early scores have Soverel trending in the right direction and less than 50 points from a podium spot.

Missing From The Millionaire’s Club

There are five players that have already won more than $1,000,000 across the 2019 High Roller of the Year season. Four of those players are in the top-five and the other is Ben Heath, who was just one of the millionaire’s made at the WSOP so far this summer. Heath’s $1.4 million score is his only High Roller of the Year cash of the year, while Sean Winter and Jake Schindler have racked up results without big paydays.

Winter did most of his damage through the earlier, smaller portion of the U.S. Poker Open. The bigger events at the end of the schedule were where Winter failed to contend and David Peters picked up a seven-figure result along with the USPO title. Schindler has 8 cashes and while that number trumps the entire top-five outside Imsirovic, the 2017 Super High Roller Bowl runner-up has yet to register a victory in 2019.

If their volume continues, Winter and Schindler will see their HROY stock continue to rise and the money will follow.

When they started the High Roller of the Year season with U.S. Poker Open wins, Stephen Chidwick and Nick Schulman were comfortably in the top-five. That’s changed over the last few months, as both have failed to add to their point totals since the USPO. They now run the risk of falling out of the top-ten entirely, which is unfamiliar territory for Stephen Chidwick.

The last time the British pro was ranked outside the High Roller of the Year top-ten was before the 2018 World Series of Poker. As this summer’s bigger WSOP events, including the $50,000 Poker Players Championship, approach we should see Chidwick and Schulman back in the mix and back in HROY contention.

Jake Schindler and Manig Loeser are the only players in the top-ten without a win…Schindler currently sits 6th, while Loeser’s six cashes and 440 points are good for 8th…Loeser is the highest ranked German player…Rainer Kempe and Koray Aldemir are tied for 14th with 340 points, along with Canada’s Kristen Bicknell…Maria Ho and Lauren Roberts are the only other female players ranked in the top-25…Spain’s Juan Pardo Dominguez won back-to-back $10K ARIA High Roller events to move into 30th place…Michael Adammo and Bryon Kaverman also opened the summer with ARIA wins and are tied for 36th place on 150 points. 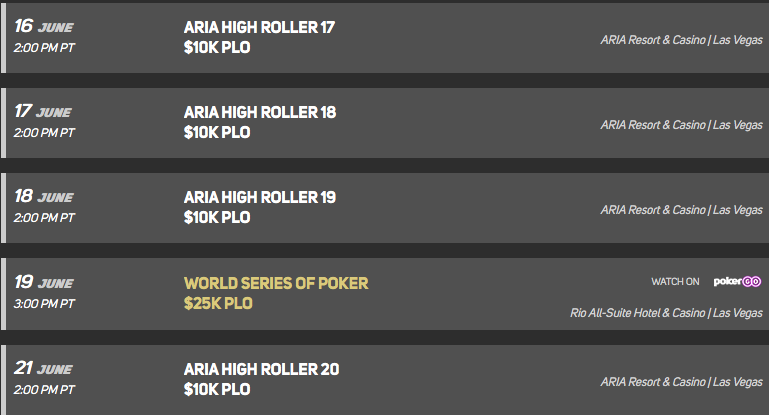 Four-card action headlines the next stretch of High Roller of the Year events. Three $10,000 buy-in Pot Limit Omaha ARIA High Rollers will run from June 16-18, before the WSOP $25,000 Pot Limit Omaha High Roller begins on June 19. That event will stream live on PokerGO for worldwide viewers and CBS All Access for viewers in the United States.