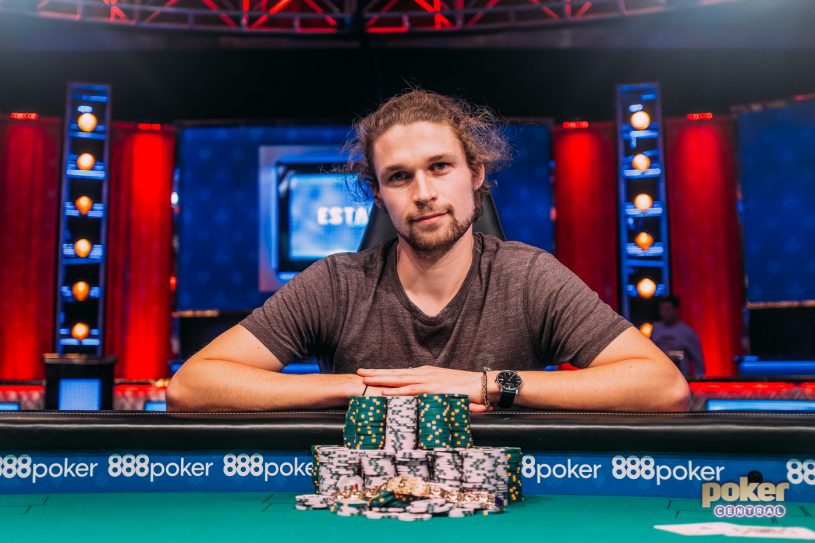 Ben Heath, pictured moments after winning the $50,000 High Roller Event #5 and his first ever WSOP bracelet!

From a huge stack in the Big 50 to the Brit who bagged his first WSOP bracelet, it’s been another very busy day in Las Vegas at the Rio, with PokerGO’s live coverage of the $50,000 High Roller (Event #5 on the schedule) capturing the imagination and pulling in viewers from around the world. There’s only one table we can start our review of the day’s action at….and it was a controversial one.

British high roller Ben Heath had already achieved so much in the game of poker, it almost feels surreal to be announcing this as his maiden WSOP bracelet. But that’s what happened on Day #6 of this year’s World Series of Poker as the Brighton-born pro won $1.48 million and the title of WSOP bracelet winner when he defeated Andrew Lichtenberger heads-up to claim the title.

In what was a controversial hand at the final table, Heath won a pivotal pot in odd circumstances, when he threw in a time-bank chip to consider the call on Dmitry Yurasov’s all-in. But Sam Soverel mucked his cards out of turn, seemingly because he believed the time bank chip was either a single chip call or Heath throwing into his own cards. Either way, Yurasov wasn’t delighted when his ace-ten was dominated to defeat by Heath’s ace-queen. Soverel’s mistake was an honest one according to eventual winner Heath, who told our friends at PokerNews:

“It was definitely going in either way. I think if I have a slightly worse hand then it could become a bit interesting, but I genuinely think he did it by mistake.”

As it happened, Soverel would bust in third place. Before that hand, we’d already seen Chance Kornuth and Nick Petrangelo eliminated on the live stream. Here’s how it all ended up, with the final table payouts from yesterday (7th – 9th place) included.

After reaching several WSOP final tables in the past, all it took for Dan Zack to make his way into WSOP history was to be picked by Team Poker Central in the $25k Fantasy Draft! On an all-American final table, Zack was the best of the six, beating Sumir Mathur heads-up after a staggering comeback saw him win $160,447 and the all-important bracelet.

Elsewhere in mixed game poker, Chance Kornuth took the lead in the Short Deck Event, and will lead the final seven players to the action tomorrow.

OTHER BRACELET EVENTS IN ACTION

In the $600 Deepstack bracelet event, 6,150 entries bumped the prize-pool, with Daniel Negreanu bagging a huge 815,000 to end his day in style. All told, 582 survived the flight, made the money and progress to Day 2.

And finally, in the $1,500 Dealer’s Choice event, it was Danny Noam who held the biggest stack at the end of the opening day’s action, with 2017 WSOP Player of the Year Chris Ferguson in the top ten.

If you want to watch any of today’s action, and with live streams available every day throughout June, stay tuned to PokerGO and CBS All Access for more coverage of the 2019 WSOP bracelet events. Selected bracelet events will be streamed exclusively on CBS All Access in the United States.