Today, Poker Central has announced the tournament dates for the second annual U.S. Poker Open®. From February 13-23, 2019 the second leg of the prestigious High Roller Triple Crown™ will play out of the PokerGO Studio at ARIA Resort & Casino on the Las Vegas Strip.

The series champion will receive a bonus payout of $100,000, contributed by Poker Central, in addition to the coveted championship trophy. The tournament will be live-streamed exclusively on Poker Central’s OTT service PokerGO, with original episodes to air at a later date on NBC Sports Network.

Here’s a look at the tournament schedule, with live streams of each event’s final table taking place on PokerGO the following day. Each event of the 2019 U.S. Poker Open is a two-day event. 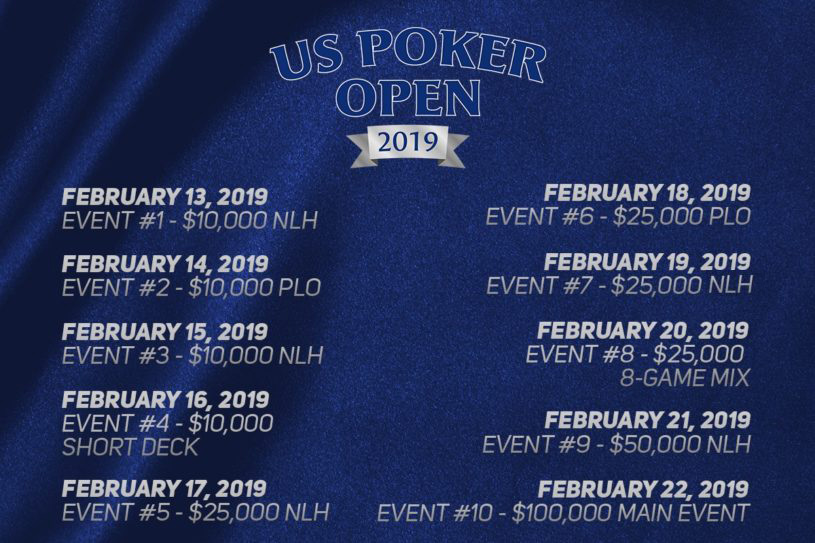 “The U.S. Poker Open, and the trio of high roller majors including Super High Roller Bowl and Poker Masters that comprise the High Roller Triple Crown, further solidifies ARIA as the epicenter of high-stakes poker action,” said Sean McCormack, director of poker operations for ARIA. “We will continue to bring our guests the most player-friendly poker events in the industry with our Poker Central partnership firmly in place through the foundation of the PokerGO Studio.”

“The turnout across each phase of the High Roller Triple Crown continues to impress and, with the next U.S. Poker Open champion receiving a cash award of $100,000, we’re expecting that trend to continue,” said Sam Simmons, vice president of content at Poker Central. “The entire series will serve as a fitting kickoff to a year of even more world-class live events and original programming that PokerGO subscribers will love.”

Don’t miss a minute of the 2019 U.S. Poker Open by subscribing to PokerGO right now. Missed any of the action from this year? Catch the entire 2018 U.S. Poker Open on-demand on PokerGO. Read and learn more about Short Deck poker here in an interview with Isaac Haxton.