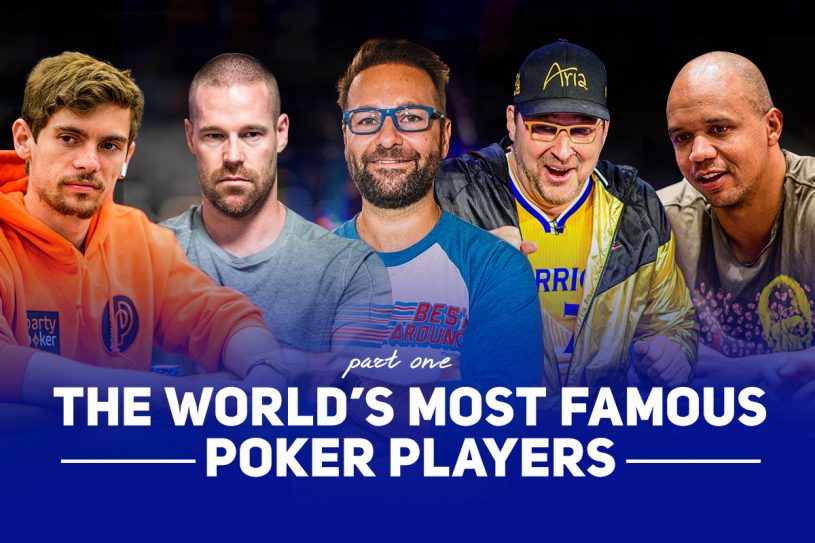 Fedor Holz, Patrik Antonius, Daniel Negreanu, Phil Hellmuth, and Phil Ivey are among the most famous poker pros in the world.

As an avid poker fan and PokerGO subscriber, we don’t need to tell you who the best and most famous poker pros are, but what if you’re new to the game of poker? What if you’re looking for a way to learn how to play No Limit Holdem? Or what if you just want to know more about who to keep an eye on as you’re watching the highest stakes tournaments and cash games? Well, we’re breaking it all down for you right here!

Poker became a game for celebrities long before celebrities became good at poker, but then the notion of putting down your money and turning those poker chips has been the ambition of famous poker players since the first cards were dealt.

Daniel Negreanu – Kid Poker is a legend in the game and recently signed to GG Poker as their new ambassador after leaving PokerStars following several years of representing them. The most successful Canadian in poker history has six WSOP bracelets and over $40 million in live tournament earnings to his name.

Phil Ivey – Legendary players don’t come much bigger than the 10-time bracelet winner who is respected by all of his peers and widely regarded as one of if not the most gifted player ever to toss in a three-bet. Still a major force to be reckoned with, whether in high stakes cash games or the biggest tournaments around.

Phil Hellmuth – The Poker Brat is a titan amongst men, the record 15-time WSOP bracelet winner and a man who has his own legend which follows him around. Highly decorated, Hellmuth has the happy knack of creating headlines whether he wins or not… but he usually wins.

Patrik Antonius – The Finnish sensation is still a major force at both the online and live tables, and always playing at the highest stakes. Listen to a podcast featuring Patrik Antonius right here.

Justin Bonomo – Second on the all-time money list, Bonomo has been so successful in recent times that he even had a year named after him. Still one of the most dangerous players ever to sit down at the table, and certainly the most dangerous with pink hair.

Erik Seidel – The man for all seasons, Seidel has won major money in four decades, and is still running deep in major tournaments virtually every month. Maybe he’ll go on forever, and he’s certainly outlasted dozens of other greats.

Fedor Holz – the German super high roller who redefined winning at high stakes, Holz has since retired from professional poker, but still dabbles in the game and has since invested in two new business endeavors – the Primed Mind app and Pokercode, where he and Matthias Eibinger blow open the GTO plays that turn great players into elite players.

Shaun Deeb – The most consistent WSOP player in recent history, Shaun Deeb has been the player to beat in the race for the Player of the Year title the past two years, but whenever Deeb takes the felt, he is a player to beat. Mixed games are no problem for the man many poker players and fans love to hate.

Bryn Kenney – The most successful tournament poker player ever according to the all-time money list, Bryn Kenney is a poker inspiration to many – including his peers. Keeney has a stranglehold over the current elite and is the man at the top of the tree. Anyone hunting him down had better have an amazing dedication to the game, phenomenal discipline and the ability to mix it like Tom Cruise in Cocktail. Listen to Bryn Kenney on the Heads Up with Remko Podcast right here.

Sam Soverel – The British Poker Open and Poker Master 2019 champion, Sam Soverel has dominated the elite scene in 2019 and is only likely to get better. Blessed with a phenomenal temperament and all the skills to put anyone to the test, Soverel is a huge fish in the biggest pond.

Want to watch the best in action? You can catch up on the recent Poker Masters action or watch the latest live streaming action from the Caribbean over on PokerGO. Subscribe today for 24/7 access to the world’s best poker content. This was the first article is a series on the most famous poker professionals.