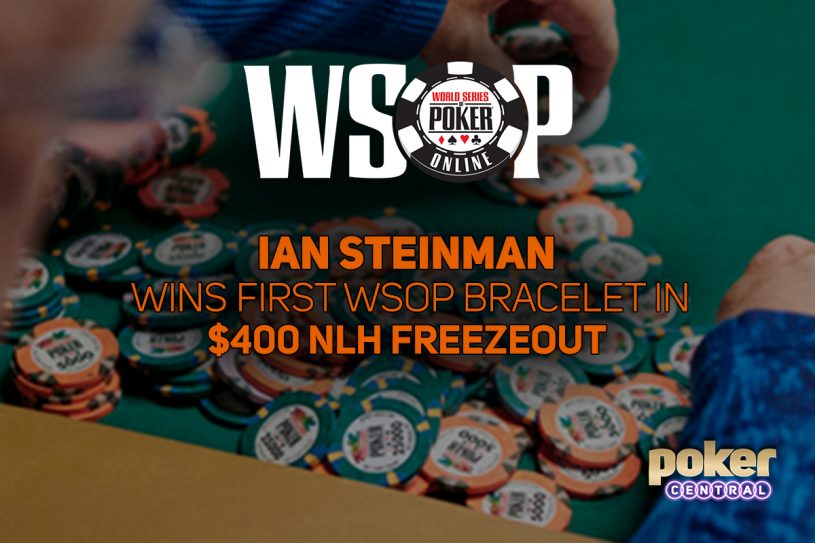 The 2020 World Series of Poker Online kicked off the start of the week on Monday with Event #27: $400 No-Limit Hold’em Freezeout attracting a 1,940-player field which created a $698,400 prize pool. Four-time WSOP-Circuit winner and 2016 WSOP.com Online Player of the Year Ian “ApokerJoker2” Steinman would emerge victorious and collect the $110,557 first-place prize and his first WSOP bracelet.

Steinman entered the final table as chip leader as Lokesh “lanku111” Garg scored the first elimination when he sent Cody “voltron12” Scherer to the rail. Huiwen “HLM99” Liu and Alida “av1925” Veliu were the next two players to fall to leave just six players. Garg would lose a race holding pocket sevens to Nicholas “Got_The_Glow” Brancato’s ace-queen as Cameron “crezident” Rezaie fell in fifth when his ace-jack couldn’t improve against Steinman’s pocket nines. Steinman then eliminated Brancato with ace-queen to ace-ten, and then Mahyar “psycho101” Ebrahimi in third to enter heads-up play with nearly a four-to-one chip advantage against Satoshi “Godzilla” Tanaka. The final hand would see Tanaka all in with king-jack against Steinman’s ace-five, and when Tanaka was unable to improve, Steinman was crowned the Event #27 champion.

Steinman has collected over $884,000 in lifetime tournament earnings that includes four WSOP-Circuit rings along with earning the 2016 WSOP.com Online Player of the Year title. At the WSOP, Steinman had reached two final tables in $1,500 No-Limit Hold’em events – a second-place finish in 2018 and a seventh-place finish in 2017 – but now he has finally broke through to win his first coveted WSOP bracelet.