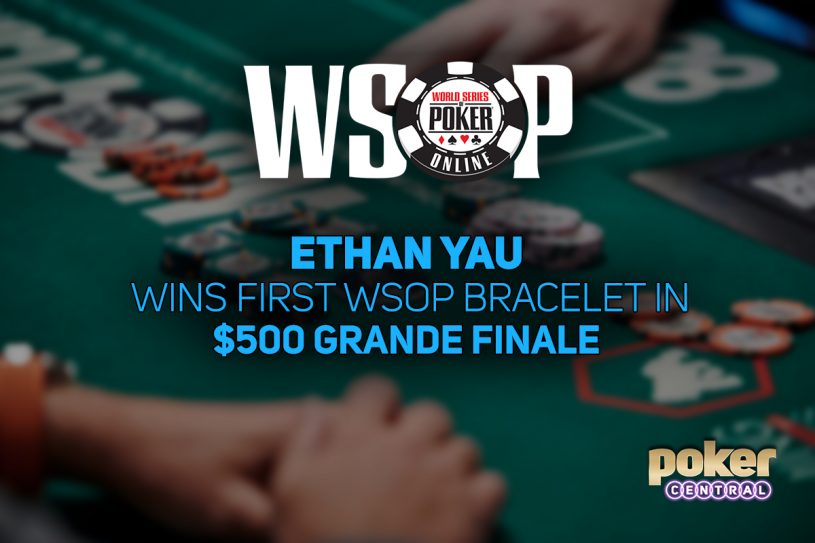 The 2020 World Series of Poker Online closed out the weekend on Sunday with Event #26: $500 Grand Finale attracting a 2,502-entrant field which created a $1,125,900 prize pool. After 12 hours of play, Ethan “RampageP” Yau collected the $164,494 first-place prize and his first WSOP bracelet – all while streaming on his YouTube channel.

Mohammad “Tmomoney” Mufti entered the final table as chip leader, but Yau soon vaulted into the chip lead courtesy of the double elimination of Michael “Mike91680” Guzzardi and Event #7 winner Joon “jykpoker” Kim. Mufti responded with a knockout of his own when he eliminated Matt “OMG”Obama” Iles in seventh holding with ace-four against king-queen. Jason “TATTOOMONEY” Scott then would exit in sixth running his eight-six into Blake “shampainpopn” Whittington’s pocket tens. David “reallytight” Kim flopped a straight, but Yau make a runner-runner flush to eliminate Kim in fifth, as Whittington exited in fourth running into Yau’s aces. Mufti’s run would end in third when his pocket nines were outdrawn by Brian “LakersGTD” Patrick’s ace-queen, and heads-up play would begin with Yau holding a three-to-two chip advantage over Patrick. On the final hand, Yau’s pocket fours would hold true against Patrick’s ace-eight, and Yau would be crowned the Event #26 champion.

The 22-year old poker player has just two live cashes to his name – both occurring at Encore Boston Harbor – but he can now call himself a WSOP bracelet winner after the $500 Grande Finale for $164,494.