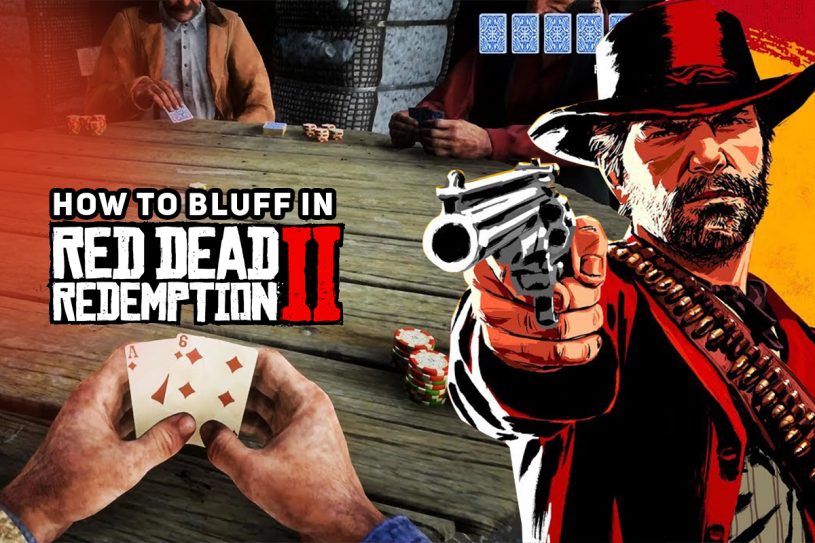 How to bluff in Red Dead Redemption 2 poker is all explained in this article!

If you’re trying to play poker in Red Dead Redemption and don’t know where to start, then pull up a seat and throw down your dollars. It’s time to get some Red Dead Redemption poker lessons to keep under your hat, Arthur Morgan. Playing poker might be as easy as taking a seat, but bluffing? You need a pard’ner and we’re here riding shotgun.

New to playing poker in Red Dead Redemption 2? Check out this article to learn everything there is to know!

We’ve already explained in some detail how the process of playing poker in Red Dead Redemption 2 works in the article linked above, and our tips and tricks across the game as a whole definitely apply to the art of bluffing, too. You need to keep your wits about you and not be tempted to go crazy. As we’ve already told you, the stakes you’re playing at, it’s pure poker for pennies, so your in-game bankroll isn’t going to make you rich in the Wild West. By the same token, nor will it bankrupt you.

Bluffing in Red Dead Redemption 2 poker is about taking the same approach that Arthur Morgan might if he was interrogating an informant – your chances are improved by dragging your victims to the river.

DON’T BLOW IT ALL IN ONE GO

Betting all-in pre-flop might work when you have a monster hand and another player has a slightly less impressive premium holding. But more often than not you can either lose your stack or win – literally – three cents.

It’s often high-risk for little reward to live in ‘Shoveland’, but betting on each street, often with as little as bottom pair on a paired or flushing board can instil the kind of panic-stricken throwing away of cards by your opponents that would one day be reserved for satellite qualifiers playing their first $5k-entry event. It’s just that in Red Dead, those mucked cards always land neatly onto the pack. They had practice with lassoes, right?

We’ve already explained that gambling your whole stack isn’t often worth the risk – you’ll almost always get a caller, and while that can mean you just rebuy, for some challenges, that itself will set you back some considerable time. Take the Gambler Challenge #10 for instance. In this challenge, you have to win three poker hands in a row. Sounds easy, right? For Arthur Morgan, this challenge is actually quite difficult and acts as a useful template for how to bluff combining what we’ve already learned. We’re going to assume you’ve already completed the previous challenges “Who Is Not Without Sin” and “Americans at Rest”.

The temptation to move all-in with your first strong hand is one that warrants analysis. It’s not necessarily the worst idea in the world for a couple of reasons. If it fails, at least you failed on hand #1, not hand #3, which quite obviously for time-suck reasons, is the worst spot to lose a hand. It’s also handy to have the other players covered, although this may not be the case and you’ll need to keep a close eye on stacks.

There are issues with shoving before the first three community cards are on the table. Gambling all-in pre-flop not only often goes wrong, but it displays a lack of poker nous in Red Dead. This is old school and the Wild West. Cowboys in those days only had one important range, and that was the length they were comfortable at between their gun and their intended target. Don’t get shot down for being too much of a gambler.

Betting a consistent story, even if it’s 95% horse manure from your steed that is tied up to the saloon door, is king. The Wild West and video games had one crucial element in common – they were all about the narrative. If you’re consistent with your story and know your audience – i.e whether Emmett or Charlie are strong or weak – then you’ll get the ending you desire.

So, there you have it. Here are the key takeaways from our tuition on How to Bluff in red Dead Redemption 2:

Looking for some real-life poker action? The action is always fast and furious inside the PokerGO Studio as the 2019 Poker Masters and Super High Roller Bowl Bahamas are now available on-demand with millions of dollars on the line. Subscribe today to the largest library of live and on-demand poker content in the universe, and that includes the Wild West!