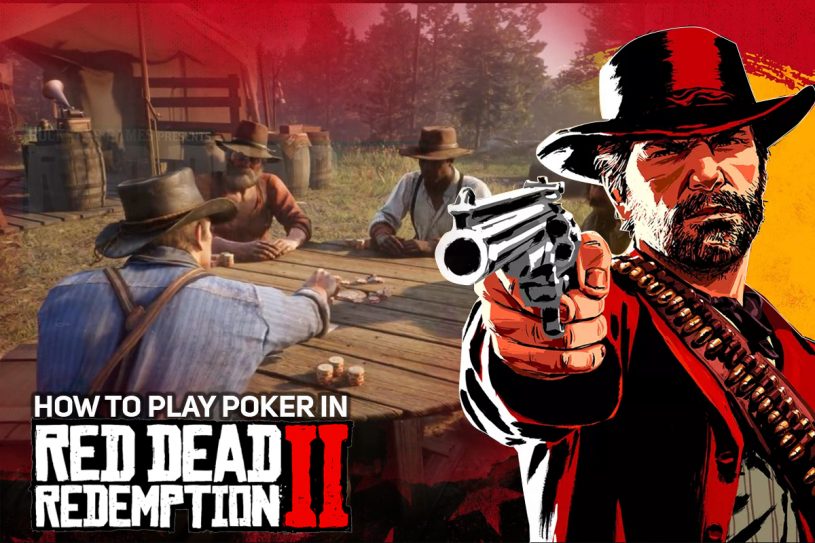 Learning how to player poker on Red Dead Redemption 2 could be very beneficial for your success in the game!

How long is the longest you’ve waited to sit down in your favorite poker game? A few hours on a waiting list? A week while your local casino was being refurbished? Maybe even 10 months between World Series of Poker?

How about waiting eight years for the release of Red Dead Redemption 2?

Released in 2010, Red Dead Redemption – the original – was one of the biggest video game releases of all-time. Taking on the Wild West as John Marston, you shot bad guys, rustled horses and played poker in the meanest cut-throat towns in turn of the previous century America. John Marston was an avenger, carrying out deeds for the man to find his family, but with his homely heart unable to resist doing the right thing – even at the biggest of costs.

With Red Dead Redemption 2 taking place in the past as a prequel to the original game, you’re not in control of John Marston this time round. You are Arthur Morgan, a hustler and member of the original Van der Linde gang that caused so many problems when they dissipated in the original Red Dead.

Back in the past, however, the Van der Linde gang is still very much in action, and poker plays a crucial part in the game. You cannot complete the main story of Red Dead Redemption 2 without playing poker, so mastering the game is pivotal to your chances of winning it. Not only that but playing poker in Red Dead Redemption is a lot of fun and there are plenty of challenges you will use your skills at the table for.

While poker is a big part of the game, if you’re thinking that you can bankroll your assault on Arthur Morgan’s meandering mission in the game, you’d be wrong. You won’t make big money playing poker in Red Dead Redemption 2. You’ll just look really, really cool.

WHERE CAN YOU PLAY POKER IN RED DEAD REDEMPTION 2?

Red Dead Redemption 2 is an ‘open world’ adventure, meaning you can ride a horse, catch a lift on a stagecoach or just run like blazes in pretty much any direction for a very long way. The world you’re running in – and running is the operative word since you’re in a lawless gang on the run from the lawmen of the era – is turn of the century, i.e. 1900, America.

Since Arthur Morgan was a gang-member and lived outside the law, poker plays a big part in the game. Poker was established as a popular pursuit in the drinking dens at the time, and if you don’t them to be your ‘last chance saloons’ then there are a few things to remember.

Back in the Wild West, it’s a cash game and strictly $1/$2 so don’t go robbing any stagecoaches for bigger buy-ins. Just like the real game online, it’s really not rigged, so you can bet on a good honest game, even if the types you’re taking on sometimes are anything but.

There are five locations where you can find a game in Red Dead Redemption 2, so make a note or, if you bought the steel book edition, put a pin in your map at these points of interest:

Ah, Blackwater. Scene of oh so much drama in the original Red Dead. But you can’t be wistful about these locations when it comes to poker, because just like most functions in RDR, it’s vital that you win at poker or complete your mission. The poker missions start in the second chapter of the game, when Who Is Not Without Sin, which takes place at Flatneck Station. Your mission, should you choose to take your seat, is to take the drunken Reverend Swanson’s place in a poker game he can’t win at. We won’t spoil what happens in the very first hand, but thereafter it’s all on you and your poker skills.

GET INTO THE GAME

In Red Dead Redemption 2, you can play poker even if you’ve never tried before. The instructions are simple and whichever saloon you’re sitting in, you’ll enjoy the varied collection of players you can come up against. From thieves and hoodlums to honest folk looking for a friendly game of cards, there’s a seat – and a whiskey – for anyone prepared to put down some bills.

Given that the year 1900 didn’t exactly feature all-night licenses, games shut down when the midnight hour creeps around, so you won’t be playing any endurance sessions. It’s all about getting the most money and fun that you can out of each min-session.

Being Arthur Morgan, you spend your night at camp with your band of merry men – or rather, Dutch’s – and you can play poker there too. If do so, be sure to consider everyone equal opponents as no-one is to be considered the mark in the game until you’ve taken all their money.

THE MAN IS THE MISSION

While all the other games you’ll sit down at are $1/$2, you can ramp it up a little at the third location of St. Denis, where $2/$4 is the going rate. The only time you’ll get to play high stakes poker is in a specific mission that demands it, which is when you take on Chapter 4’s A Fine Night of Debauchery where you take on some whales aboard a riverboat. It’s a nice touch from RDR, with riverboats believed to have been one of the first places that playing poker became commonplace.

Of all the challenges in Red Dead Redemption 2, three of them are poker-centric, but you’ll breeze through missions such as winning five hands of poker. Harder missions include busting players in three tough locations, where you’ll need to go big or go home. While the original Red Dead Redemption saw the opportunity to draw your gun and out-duel someone for bad-beating you, it doesn’t pay to step too far out of line at the felt back in 1900.

The rest is up to you. You can carve out a reputation for Arthur Morgan as a poker hustler or get back to robbing kind-hearted folk and running from the law. If you can’t win at poker in Red Dead Redemption 2, then you aren’t playing enough hands. Or, as Arthur Morgan might say, “You, Sir, are a fish.”

You’re never at risk of elimination when it comes to PokerGO coverage. Subscribe today to gain access to the best poker coverage on the planet from live streams of huge tournaments such as the Super High Roller Bowl as well as Poker After Dark and classic WSOP footage from the archives.