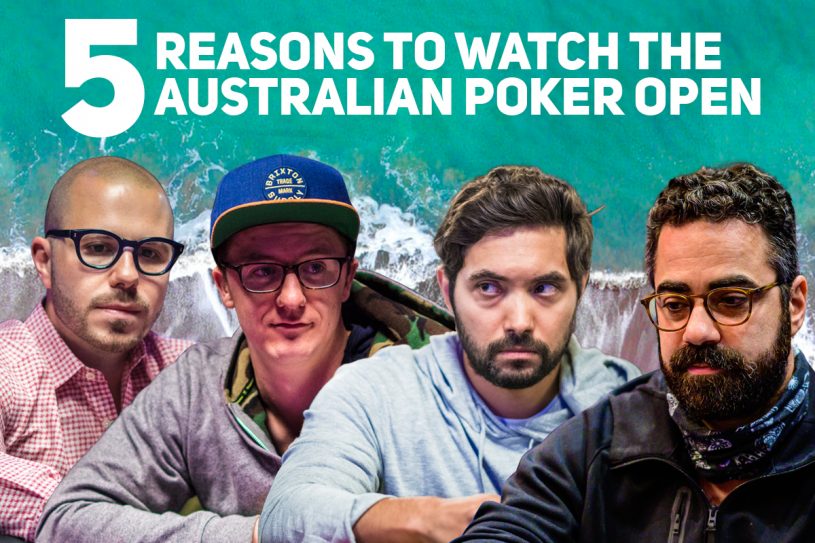 Dan Smith, Kahle Burns, Timothy Adams, and Orpen Kisacikoglu participating is just one of the reason why you can't miss the Australian Poker Open on PokerGO!

January is typically one of the best months of the year to visit the land Down Under. With the Aussie Open tennis championships taking place in Melbourne every year, they have been joined by the ATP Cup in the past week. For poker players, the lure of the Aussie Millions is well-founded, but the addition of the Poker Central Australian Poker Open has really sealed the deal for many heading to Oz quicker than Dorothy might click together her boots.

You can watch all the action from Down Under on the PokerGO stream of course, with our team live streaming the action to you throughout. But if you’ve never enjoyed poker on live TV, don’t know about streaming or have simply yet to see one of our live streams, then let’s tell you why you should kick off your poker year with the video streaming service that will bring one of the year’s most exciting tournaments to life.

The Players Heading Down Under

The best reason to watch such a Series is always the players you’ll get to see at the felt. Recent events such as the British Poker Open have highlighted just how high the standard is in Super High Roller series, with some of the best players in the world eulogizing over the play of Stephen Chidwick for example. Britain’s best tournament poker player in history is not the only star attraction looking at panning for glory on the Gold Coast, however. Other superstars to have shown interest in both the Australian Poker Open and subsequent Super High Roller Bowl Australia include Dan Smith, Mike Watson, Sean Winter, Matthias Eibinger, Peter Jetten, Timothy Adams, Elio Fox, Sam Greenwood, his brother Luc Greenwood, Orpen Kisacikoglu, Mikita Badziakouski and one of Australia’s biggest talents, Kahle Burns.

Check out this stunning fold back in October from Burns after a great move by Sam Trickett is uncovered by the Antipodean.

Kahle Burns gets put to the test by @Samtrickett1! Is this the best fold we've seen so far @WSOP Europe? https://t.co/wtwTU6NmGw 🤔 pic.twitter.com/QuXGnFj2Jw

The Best of Oz Will be in Action

It’s worth tuning in to the Australian Poker Open just to see if Kahle Burns smashes everything in his path. The two-time WSOP bracelet winner has been one of the most successful players in the past 12 months and in a year’s time could well be talked about as Australia’s most successful tournament poker player of all time.

What do you mean, he’s currently $4.3 million behind the former WSOP Main Event champion and Aussie legend Joe Hachem? No, we realize that, and we’re still confident that by the time next January rolls around, Burns may well be on top of the lot Down Under.

The man is a poker legend in the making, as he showed when he won the partypoker MILLIONS UK Super High Roller for $350,000 just last week. What a boss.

Sam Soverel Could be Beaten

It’s hard to remember a Series of High Roller events that Sam Soverel didn’t win, such is the American’s success in big buy-in events. The current Poker Masters champion certainly turned on the style when he beat Chris ‘Big Huni’ Hunichen and many others to the Purple Jacket just a couple of months ago.

The perfect length of time to enjoy the best poker action, the Australian Poker Open will begin on January 25th and continue through February 1st, while the Super High Roller Bowl Australia takes place on February 2nd and runs for three days.

With both events streamed only on PokerGO from The Star Gold Coast in Broadbeach, Queensland, the events, which are held in partnership with the World Poker Tour, will mark a groundbreaking partnership between Poker Central and the legendary World Poker Tour.

Just look at what happened at the recent WPT Five Diamond final table as the World Poker Tour event came to life on PokerGO.

Heroes are Made Down Under

Australia has shown every January that in both tennis and poker, that is a place where heroes are made. From the Australian Open that has formed the cornerstone of former world number one Novak Djokovic’s assault on Roger Federer’s Grand Slam record to the world-famous Aussie Millions, everyone loves to win Down Under.

With previous Aussie Millions and Super High Roller event winners in Australia including such luminaries as Sam Trickett, Bryn Kenney, Toby Lewis, Ari Engel, Oliver Speidel, and Gus Hansen, the action at the tables Down Under will be hotter than ever this January and February, exclusively on PokerGO. Subscribe today to enjoy 24/7 poker content to thrill every poker fan!