You are here
Home > News > Daniel Negreanu: “I Got Lucky to Get Here” 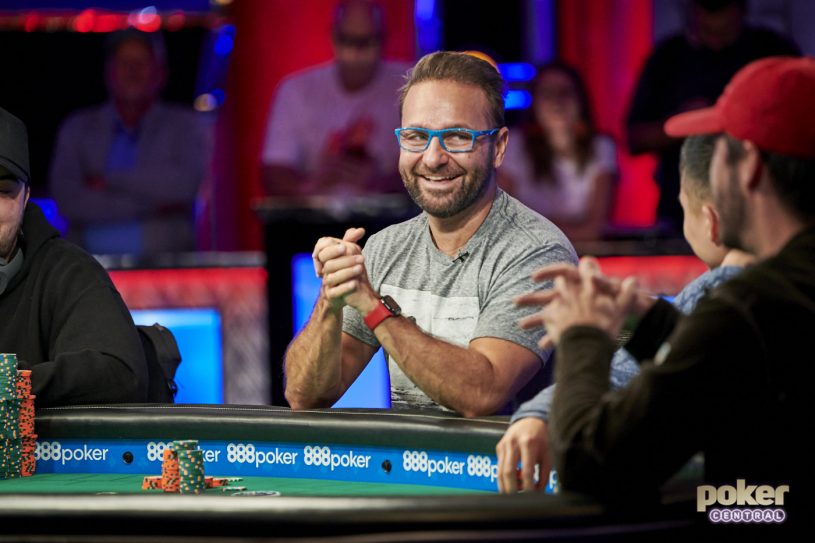 Daniel Negreanu was all smiles despite busting in sixth place at the final table of Event #1.

The 2019 World Series of Poker for Daniel Negreanu has started off about as well as possible with a sixth-place finish in the $10,000 Super Turbo Bounty event for $52,099. Negreanu fell just a few places short of his first bracelet in Las Vegas since 2008 but despite the potential heartbreak with another piece of gold jewelry without arm’s reach, the Hall of Famer was very pleased with the way things played out.

“You have to get lucky in this structure, this was almost kind of like a charity event in that way. I didn’t make a mistake – getting all in there with ace-ten – but I did get lucky to get here.”

At the final table, Negreanu found ace-ten and shoved from the button into the queen-jack of Loren Klein in the big blind. The turn brought a queen and the crowd let out a collective sigh as the river did not improve the Canadian’s hand.

“The mid stakes package is off to a good start!” Negreanu excitedly said after busting as he’s got the biggest fanbase in poker backing history rooting him on this summer.

When offering his own action in three different packages for the 2019 World Series of Poker, the response was overwhelming. A technical error resulted in Negreanu taking in $1.8 million while he had only put $275,000 worth of action on offer, leading to chaos and a lot of disappointment.

Refunds have been processed

Approximately 90% of the purchases had to be refunded.

We took in approx $1.8 million in minutes!

“The support has been great, but when it happened I was crushed, I was gutted. With the entire team, we worked all day to resolve the problems and issue refunds and I tried to respond to each and every individual person who had a question or concern.”

“My agent Brian is very good at always pointing out that there’s a silver lining, and look at all the support we got for something we put together so quickly and what we can build on towards the future for getting fans engaged. The fans that missed out, first and foremost, will be first in line for anything I do in the future.”

Looking ahead at what’s to come, Negreanu is high energy and jumping straight into the $500 Big Fifty followed by the $1,500 Omaha Eight or Better as well as the $50,000 No Limit Hold’em today and tomorrow.

“This summer I’ll be using performance-enhancing drugs that I’ve never used before!” Negreanu joked about how he’ll be able to stay sharp for seven weeks.

“I checked with some sources and I know that it’s legal and it’s called ‘coffee’. You ground up some beans, let them sit in hot water after, and then you drink it. It makes me talk way faster and it helps me with focus late but I have to make sure I don’t overdose! So far we’re at one per day and my nurse/doctor Amanda Negreanu will make sure I am doing it right!”