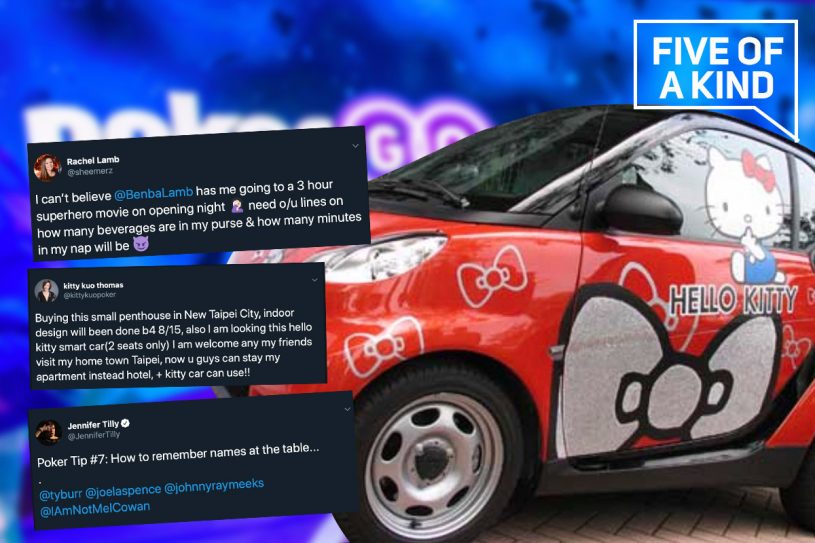 All the latest from poker Twitter recapped in Five of a Kind!

Hello! Feeling like you missed something on social media in the last few days? Don’t fret, Five of a Kind recaps all the action for you in a convenient overview. This week, we, begrudgingly, look at Daniel Negreanu’s bulge, check in on Jennifer Tilly, see some NFL Draft drama that impacted poker fans, and saw another great set of Tweets from our favorite: Kitty Kuo.

The Name Game with Jennifer Tilly

Jennifer Tilly is a Hollywood legend and one of everyone’s favorite poker players and in the video below she does what everyone does at the poker tables! What are your favorite “poker table nicknames” as it’s clearly impossible to remember the names of all the people you’re playing against! Let us know on Twitter.

The NFL Draft is always a spectacle on Twitter as every pick is highly scrutinized by fans, pundits, and of course poker players and gamblers. The New York Giants did something that was seen as insane and a man by the name of Snacks Curry wen ham in the video below. This was just how Dan O’Brien had pictured it and it’s safe to say this draft pick had many Giants fans in a frenzy.

When someone tells me he’s watching the NFL draft, this is exactly how I picture him. Wild. https://t.co/IVN1BGNBGf

All jokes aside, Rachel joining Ben for a three-hour superhero movie is probably a sign that their marriage is better than ever before! Rachel sat through the whole thing and we can only imagine how many drinks and naps she took to make it to the end!

Yes, the title of this segment could be its own weekly article, we know. Kitty Kuo was at it again and this time it was real estate related. It looks as though Kuo is using her purchasing power to get a nice penthouse in New Taipei City but while her husband Russell Thomas seems to like that idea, he’s definitely not on board with her choice of car!

Buying this small penthouse in New Taipei City, indoor design will been done b4 8/15, also I am looking this hello kitty smart car(2 seats only) I am welcome any my friends visit my home town Taipei, now u guys can stay my apartment instead hotel, + kitty car can use!! pic.twitter.com/mvGKD54aV7

Did we have to talk about this? No. Did we want to talk about this? No. So why are we? Well, it’s Daniel Negreanu and the photo below got a massive amount of tracking in the social media streets. Was Kid Poker really showing off the goods? Was the sun in his eyes and did he not notice the framing of this photo? Knowing Negreanu this was all planned and we can only imagine how much joy he must’ve been getting out of this.

The calm before the storm… Did 90 minutes lifting followed by 40 minutes on stairs to release some pre game 7 stress! First up: Leafs/Bruins Then the main event: Knights/Sharks Best time of year! #Destress #nhlplayoffs #zen #gymgrind