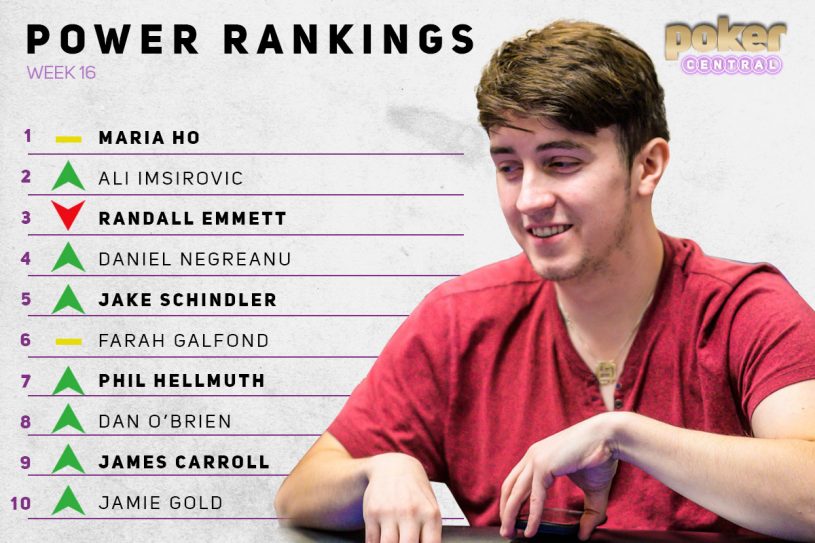 Ali Imsirovic's impressive High Roller of the Year run has him near the top of the Poker Central Power Rankings. (Photo: Poker Central)

Maria Ho is continuing her dominance of the Power Rankings by staying at No. 1 for the second straight week, and her sixth straight week in the Top 3. This week marks the third straight week in which Ali Imsirovic climbs the rankings, placing him at No. 2. Randall Emmett drops one spot but remains in the Top 3 while James Carroll and Jamie Gold are in the Top 10 for the very first time. Now let’s dig in!

It was terrific catching up with Maria Ho last week, and she continues to hold onto the No. 1 spot on the Power Rankings off her impressive WPT final table run. Read the feature article about her by clicking the link below.

“My Parents Taught Me That Success is Not Based on Keeping Score Through Dollar Signs,” Maria Ho.

Ali Imsirovic has taken the reigns in the High Roller Player of the Year Standings, a race he’s very eager to win! Read all about his dominant weekend at the PokerGO Studio in the article below.

Another Ali Imsirovic Win, A New High Roller of the Year Leader

For the third straight week, Randall Emmett finds himself in the Top 3 of the Power Rankings. The voters continued being in favor of Randall with the anticipation of his appearance on Poker After Dark in mind. As you’re reading this that content is now probably available on-demand or live, so go check out Emmett in action as he’s a guarantee to keep bringing his highly entertaining antics to the table.

Let’s just say that Daniel Negreanu’s most recent Instagram post won’t make it into this article as an embed. If you are so inclined, click this link to see what he was up to as it sparked a lot of banter, a touch of controversy and most of all a lot of laughs.

Hot off back-to-back runner-up finishes to Ali Imsirovic, Jake Schindler now sits 10th on the High Roller Player standings. Schindler is a silent assassin, and one of Randall Emmett’s favorite players and it looks as though he’ll be in contention all year long.

Farah Galfond can’t be knocked off her sixth place on the Power Rankings as she continues to hold steady. This is the sixth straight week that Farah ranks in the Top 10, never ranking lower than sixth place. This week she’s once again battling it out inside the PokerGO Studio on “Golden Nights” on Poker After Dark, so go check it out!

Nostalgia is a beautiful thing! Twitter reminded us of one of the most epic Phil Hellmuth videos from the 2003 World Series of Poker Main Event and that lone is worth some recognition! Phil had much more going on though as you can see on his Twitter feed.

Dan O’Brien went ham on Twitter after the Vegas Golden Knights lost in a bizarre game against the San Jose Sharks but that’s not why he made the rankings! O’Brien took down the Run it Up Reno event for $47,000, closing out an epic week of poker action hosted by Jason Somerville at the Peppermill Resort & Casino.

congrats to my old friend @DanOBrienPoker, winner of our @runitupreno VIII Main Event for $47,000. 🏆

5 years ago, Dan and I came to @PeppermillPoker as Ultimate Poker pros hosting 15 @runitup guests as part of the Nevada Poker Challenge. our event has grown a bit since then! 🚀 pic.twitter.com/6rY77PQDhO

Jamie Gold is back! Or was he never gone? That’s a question I asked myself as I spoke to his earlier this week about returning to Poker After Dark for the first time in a decade. Read in the article below about what Jamie has been up to lately and his ongoing love for poker.

Jamie Gold is Back! But Was He Ever Gone?