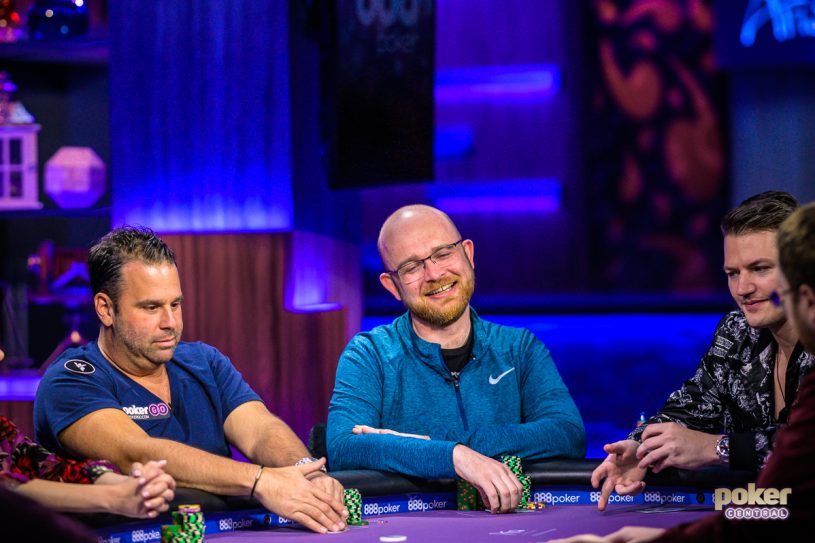 Dylan Linde in action during Run it Once week on Poker After Dark.

“Once you determine a tournament is good value for you to re-enter, it’s wrong to stop.” Says Dylan Linde about the WPT Five Diamond he won for a career-defining $1.6m result at the end of last year.

Flash forward six months and Linde is now just days away from arriving at the HyperX Esports Arena for the Season XVII Baccarat Crystal WPT Tournament of Champions, but in this episode of Heads Up With Remko recorded in the last few days of 2018, Linde opened up about his strategy of re-entering no less than four times at the WPT Five Diamond Classic.

Watch the World Poker Tour on PokerGO this month as three final tables are set to air on May 30, 31 and June 3. Check out the PokerGO Live Events page to make sure you don’t miss a minute of the action!

“I went through five bullets in 20 hours of play. It takes me a lot longer to make that [money] in the games that I like to play.”

A mixed game specialist, Linde is set to release a book on the strategy of playing mixed games, which promises strategies for draw, stud and flop games, called Mastering Mixed Games. He looks back on his final table performance with some pride, especially when it comes to his style of play.

“I thought ‘Let’s go for it’ in every spot. The people who invested in me were going to see my hands. I wanted to show them I can do it when the big money is on the line not just in the first few levels.”

There’s no doubt that Linde has put in the time and paid his dues. He’s suffered damaging defeats before his glorious victories, including his PCA loss to Kevin Schulz. Having got all the way to the final table, he was flipped out of the tournament, and it hit him hard.

“I cried for thirty minutes after that flip.” Says Linde now, looking back on that moment. “That was devastating for me. To try for so many years and get to that point, it was just a devastating moment. I wanted it so bad and I’d worked so hard. It felt like maybe it would never happen.”

It did, however, happen for Linde, and when he took down the WPT Five Diamond Classic, one of the most prestigious tournaments in poker, he was overjoyed.

“I’ve been striving for so long, and the fact I was able to come out on top means the world – it’s everything. Competing has always been my dream and poker has been the best outlet for it.”

Linde firmly believes that the only way poker players can succeed at the highest level is to have better players to bounce ideas off.

“If you have someone who’s smarter than you, it’s the best asset you can have, they’ll tell you where you’re wrong or show you, by beating you!”

Want to hear what Linde felt when he had the choice of abandoning poker or leaving the U.S. to move to Mexico? Maybe you want to hear his thoughts on selling action and what the mixed games are really like during the World Series of Poker. The only way to do so is to listen to the full interview now – you won’t regret it!

Looking for more of Linde? Check him out during Run it Once Week on Poker After Dark. New to PokerGO? Subscribe right now.