Joni Jouhkimainen was one of the top stacks through the early levels – until a run-in with Mark Davis sent the Finish partypoker pro down the leaderboard.

That came while we were monitoring the action around Viktor Blom, but we didn’t have to wait long to see Jouhkimainen regain the tournament’s top spot.

Action was picked up pre flop with Espen Myrmo opening to 7,000. After Mark Davis called, Jouhkimainen three-bet to 30,000 from the blinds. Myrmo replied with a four-bet to 99,000 and the rest of Jouhkimainen’s stack got in after Davis got out of the way. 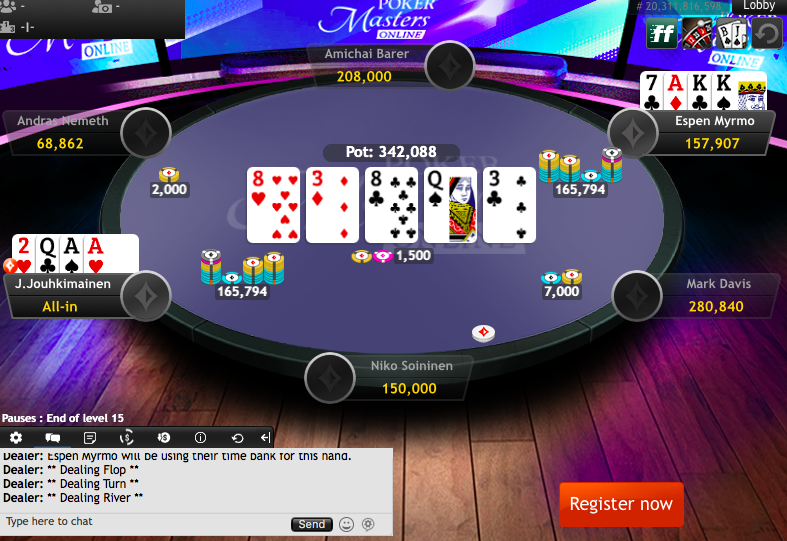 Jouhkimainen’s pocket aces held and he’s now well over 300,000 heading into the second break of the day. A complete update of the other stacks at Table 5 is also provided below.

Back From Break with Viktor Blom

After the first break of the day, two new entrants pushed Event #1 past the five table mark. Viktor Bloom was drawn to move and he took just shy of 240,000 chips to Table 6 – where we spent Level 3…

While Blom brought us to Table 6, first blood went to Lasse Nielsen. The man flying the Maltese flag flopped a straight to take a majority of Jonathan Depa’s stack – while pushing himself over 200,000.

The American – playing out of Costa Rica – remained on that short stack for an orbit, before Yuri Dzivielevski joined him under the century mark.

Dzivielevski went to the river and folded against Germany’s Fernando Habegger, with the board and final action posted below: 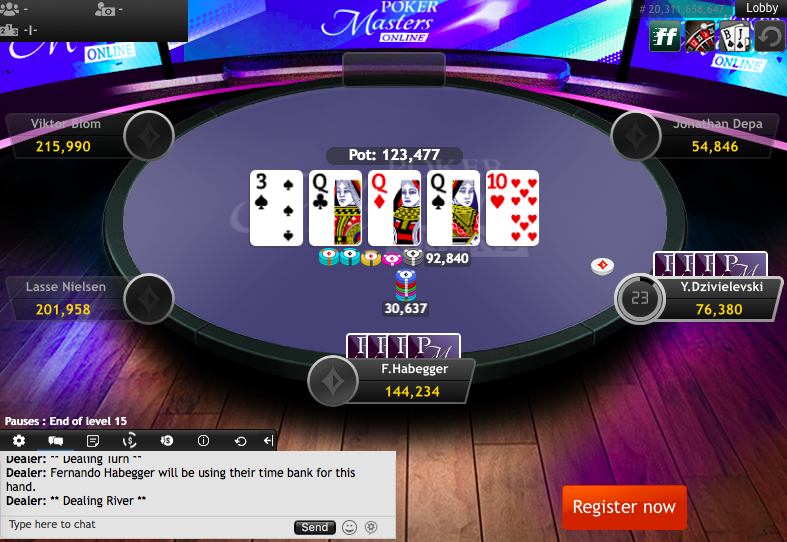 A few hands later, Habegger and Blom clashed in a pot that further separated the Table 6 chip leaders. Habegger opened, Blom three-bet from the blinds, and then continued on the flop. 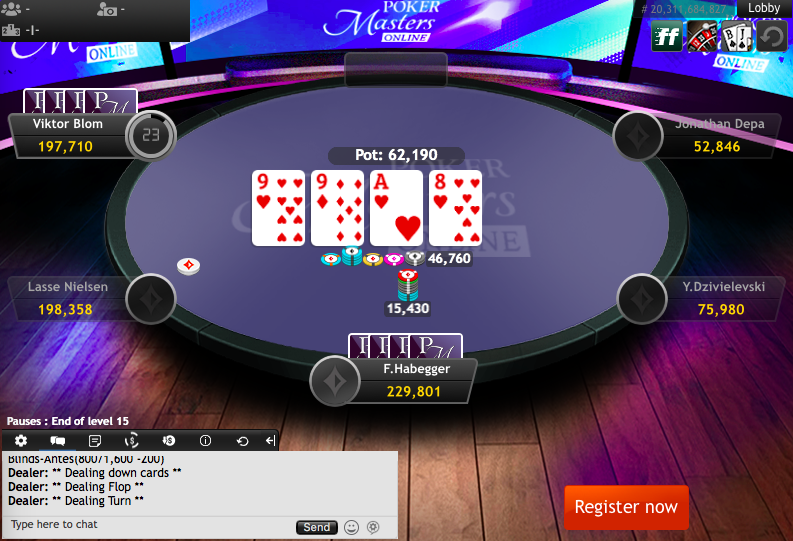 The Swede slowed down on the turn and folded after a Habegger bet the turn – as pictured above. Habegger is now one of the top stacks in Event #1.

With a few minutes remaining in Level 2, a fifth table – headlined by partypoker pro Joni Jouhkimainen – was opened. 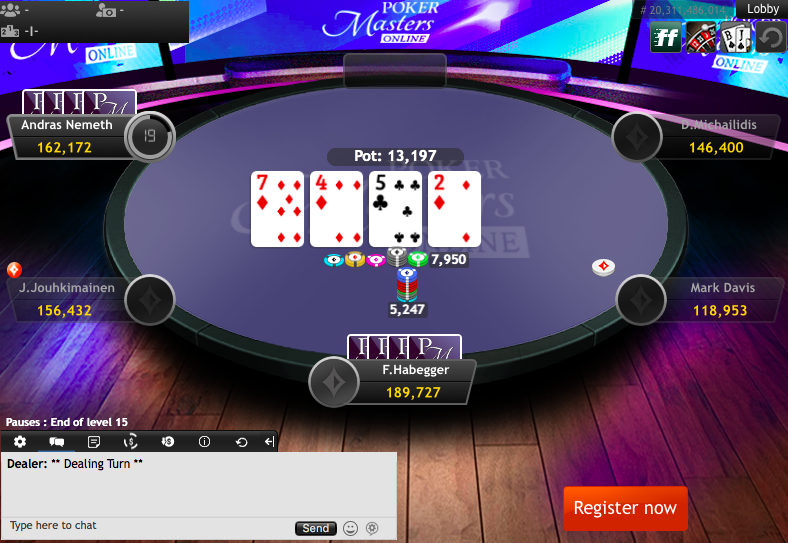 Blinds will increase every 25 minutes and late registration will close after Level 8. Day 1 will conclude at the end of Level 15.

Poker Central will provide updates, commentary, and screenshots over the next six and a half hours as Event 1 kicks off Poker Masters Online: Pot Limit Omaha – another one of the highest stakes weeks of the year.

While large scale live tournament poker doesn’t look to be back any time soon, the Poker Central/partypoker collaboration continues online. Over $10,000,000 will be up for grab over the next week, as Poker Masters Online: Pot Limit Omaha kicks off today on partypoker.

The PLO-only series will feature a total of 29 two-day events with buy-ins ranging from $500 to $50,000. Poker Masters Online: Pot Limit Omaha will also award $50,000 and a special edition Purple Jacket® to the series champion. 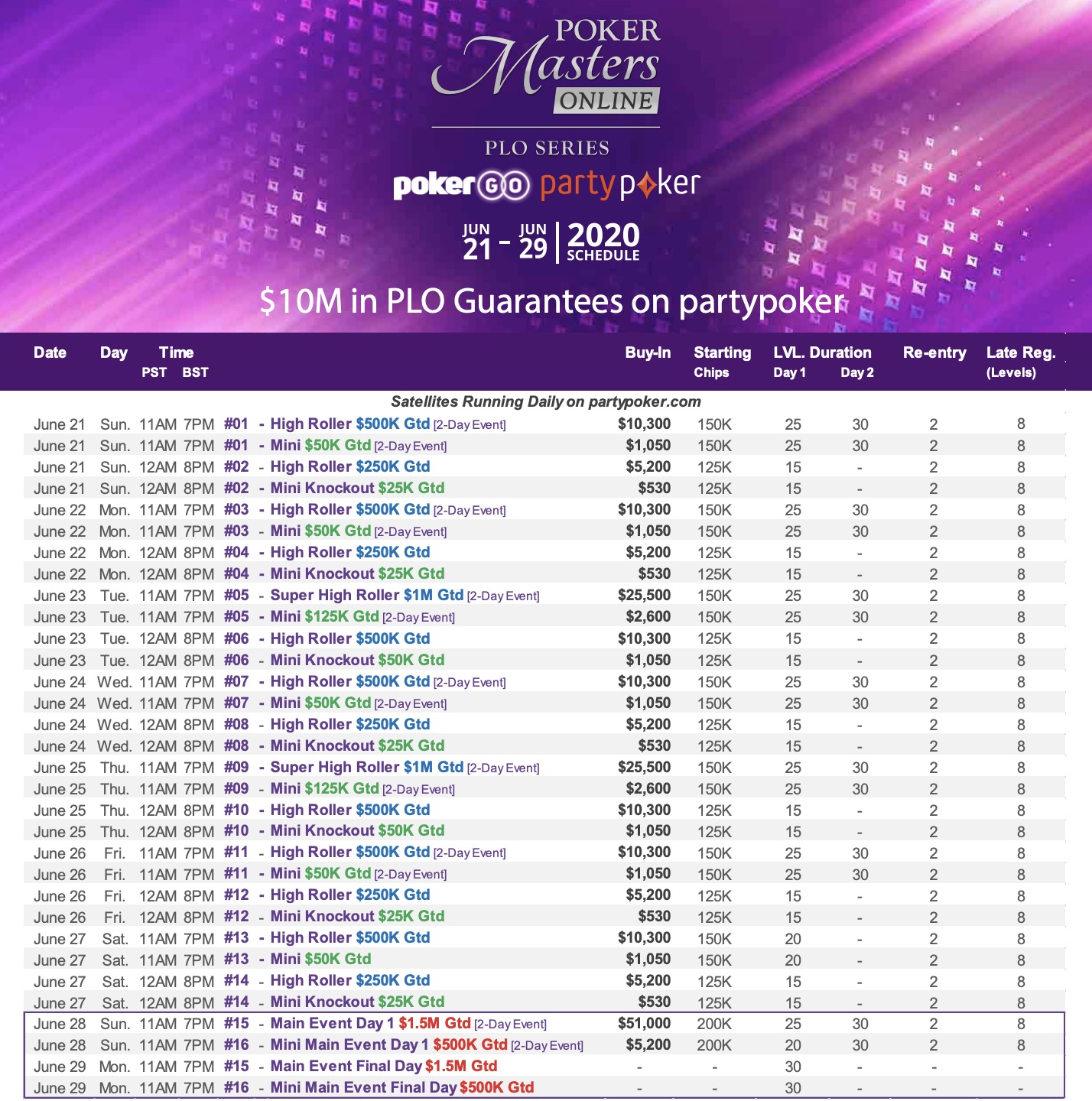