At the start of Level 10, Andrew Pantling was the Event #1 chip leader. He is still working a top-5 stack, but Isaac Haxton is now over 1,000,000 after picking up a sizable pot with pocket aces.

Action was picked up on the flop, with Pantling betting 68,000 from the big blind. Haxton called and Mark Davis folded. Pantling then continued with another bet on the turn, which is pictured below. 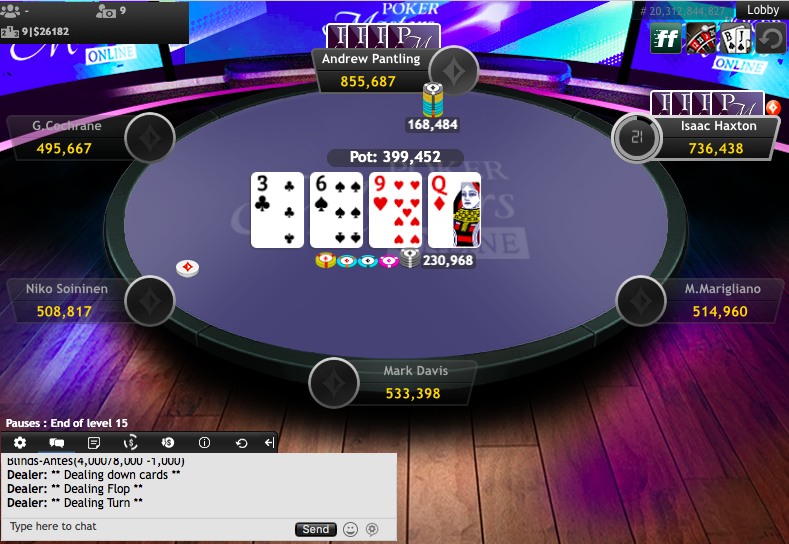 Haxton called and after the board paired on the river, both players checked. Pantling elected to not fire the river with his missed draw, and Haxton took the pot with aces up. 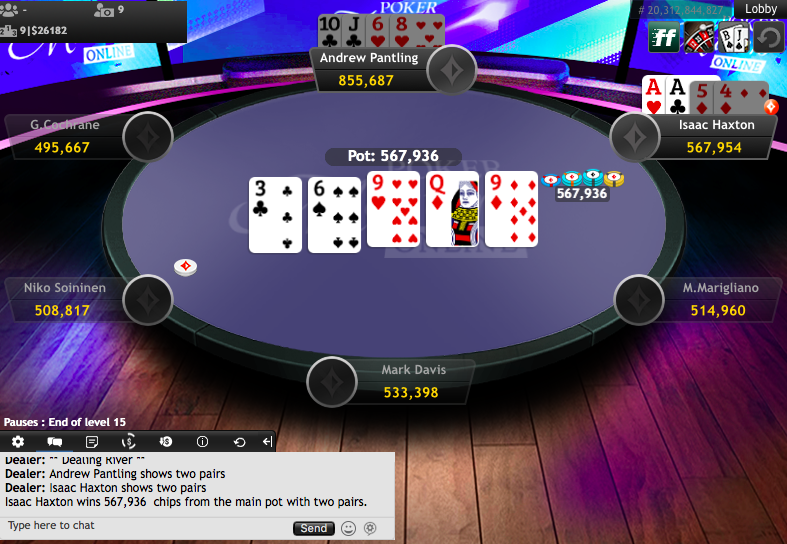 Haxton is now one of two players with seven-figure stacks – the other being Andreas Torbergsen.

We’ve yet to catch current chip leader Andreas Torbergsen in action, but just before his table broke we saw him score a knockout to move near the 1,000,000 chip mark.

Just before that hand, Gavin Cochrane took a substantial portion of Sami Kelopuro’s stack. Cochrane rivered a full house and got value on the end to move over 500,000. The final board is shown below. 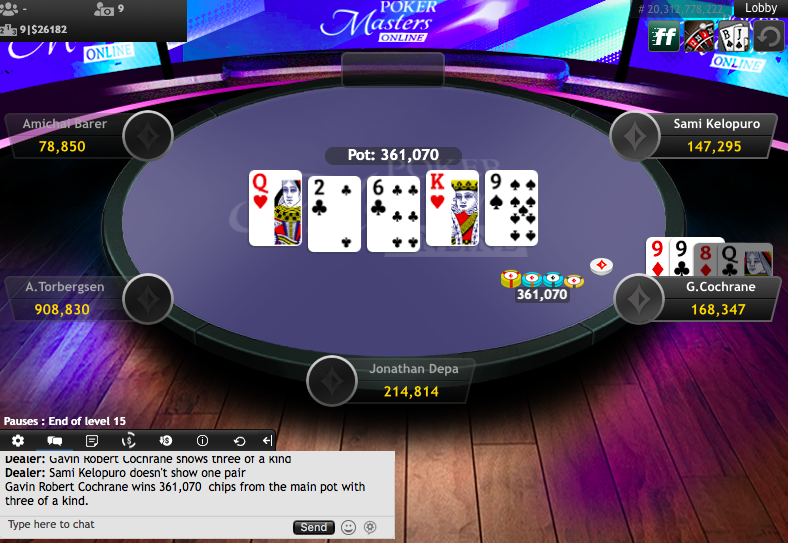 While Cochran is over a half-million, Torbergsen is playing close to double that amount after sending Amichai Barer to the rail. The short stack got all-in with pocket queens and Torbergsen tried to score the knockout with a suited ace. He did just that, pairing up on the flop and holding through the river. 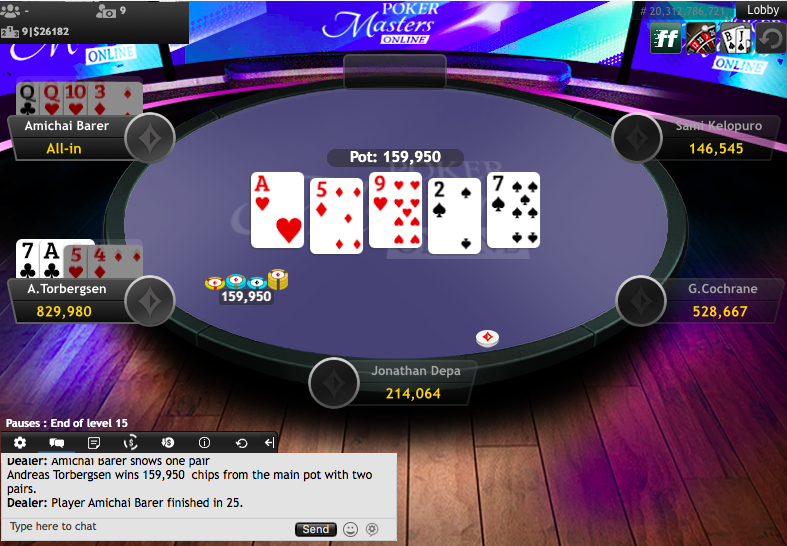 After the hand, this table broke and there are now only four tables remaining in Event #1.

Level 8 has concluded and that means that the Event #1 payouts are set.

A total of 72 entries built up a $720,000 prize pool and 9 players will cash in the opening event of Poker Masters Online: Pot Limit Omaha.

Whether we get ITM today or after tomorrow’s Day 2 restart remains to be seen, but Poker Central will be here to bring you the action from the next few hours of action regardless.

As a reminder, Day 1 will conclude at the end of Level 15.

Heading into the final level of late registration, 59 total entries have pushed the prize pool over $500,000 and nine players are scheduled to cash in the opening event of Poker Masters Online: Pot Limit Omaha.

Those figures will be finalized after Level 8, and play will then continue until the end of Level 15. The remaining players will bag chips for Monday’s Day 2 restart.

Poker Central will continue to provide updates from Event #1 through the next few levels, with an updated look at the chip counts coming shortly.

Jason Mercier entered late and while we missed some of his early action, we caught the hand that took Mercier to the top of the leaderboard. 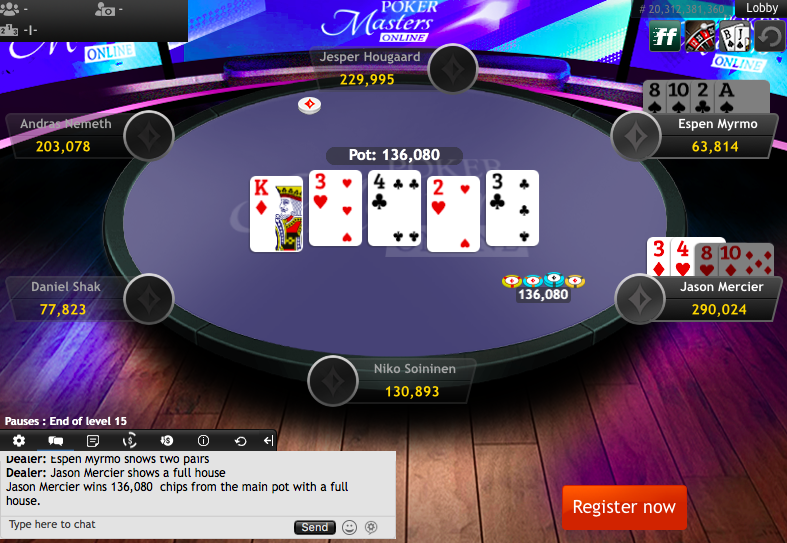 In a battle of the blinds, Espen Myrmo bet all three streets – including a pot-sized 45,000 chip bet on the river. Mercier called down and now sits over 400,000.

The tournament is heading towards another break, which will be the last before the end of late registration.

Another lineup that has it’s fair share of big stacks surrounds Table 1. Lebanon’s Mark Demirjian and Finland’s Eelis Parssinen were over 300,000 at the start of Level 6, while partypoker pro Sam Trickett was stuck below starting.

While Trickett hasn’t ticked higher or lower, Martin Kozlov is moving up. The Aussie – who is flying under the Mexican flag today – has been hovering between 300,000 and 350,000 for the last few orbits. 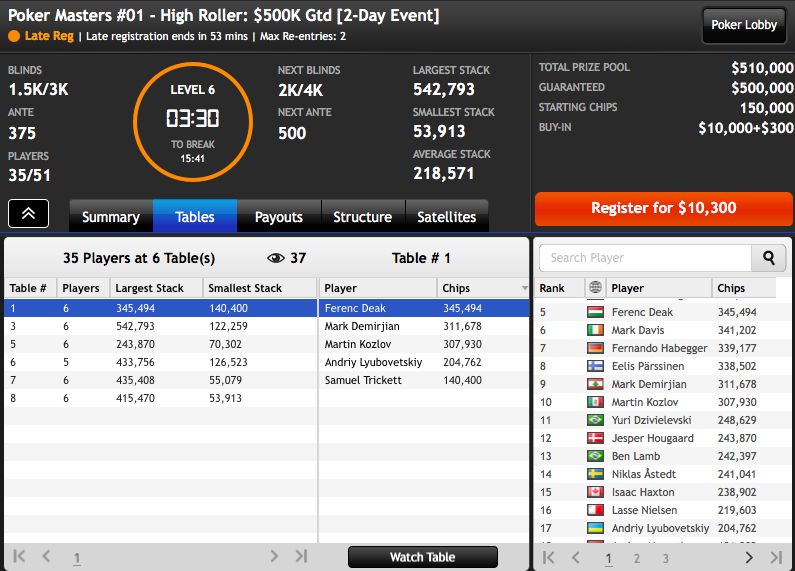 After the second break of the day we decided to pull up Table 3 – where two of the tournament big stacks were located, alongside Isaac Haxton and Ben Lamb.

While the former hovered just below starting for most of Level 5, the latter tripled to move up the leaderboard.

Action was picked up pre-flop, with Mark Radoja opening to 6,250 from under the gun. Big stacks Imad Derwiche and Bujtas Laszlo called, before Lamb three-bet from the small blind. All three players called to see the flop and then everyone except Derwiche got their chips in. 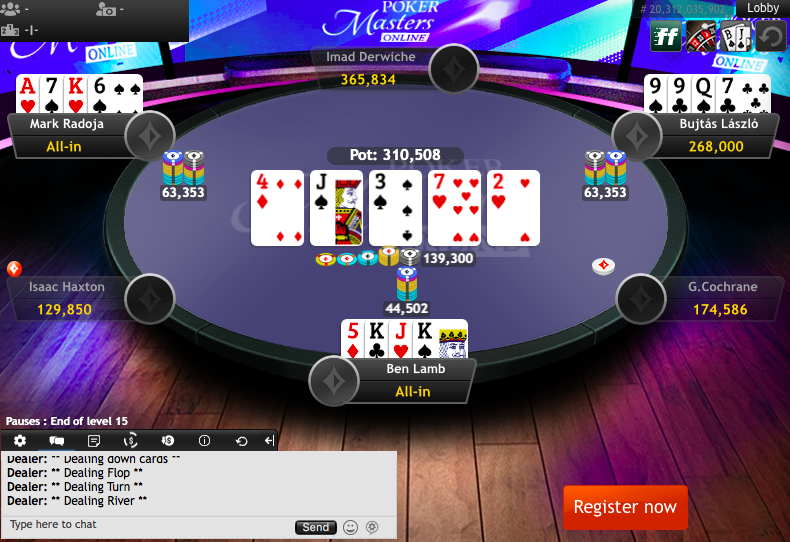 Lamb’s kings held to secure the triple and he’s now playing a top-10 stack. Laszlo picked up the smaller side pot and is playing a top-3 stack. Radoja was eliminated.