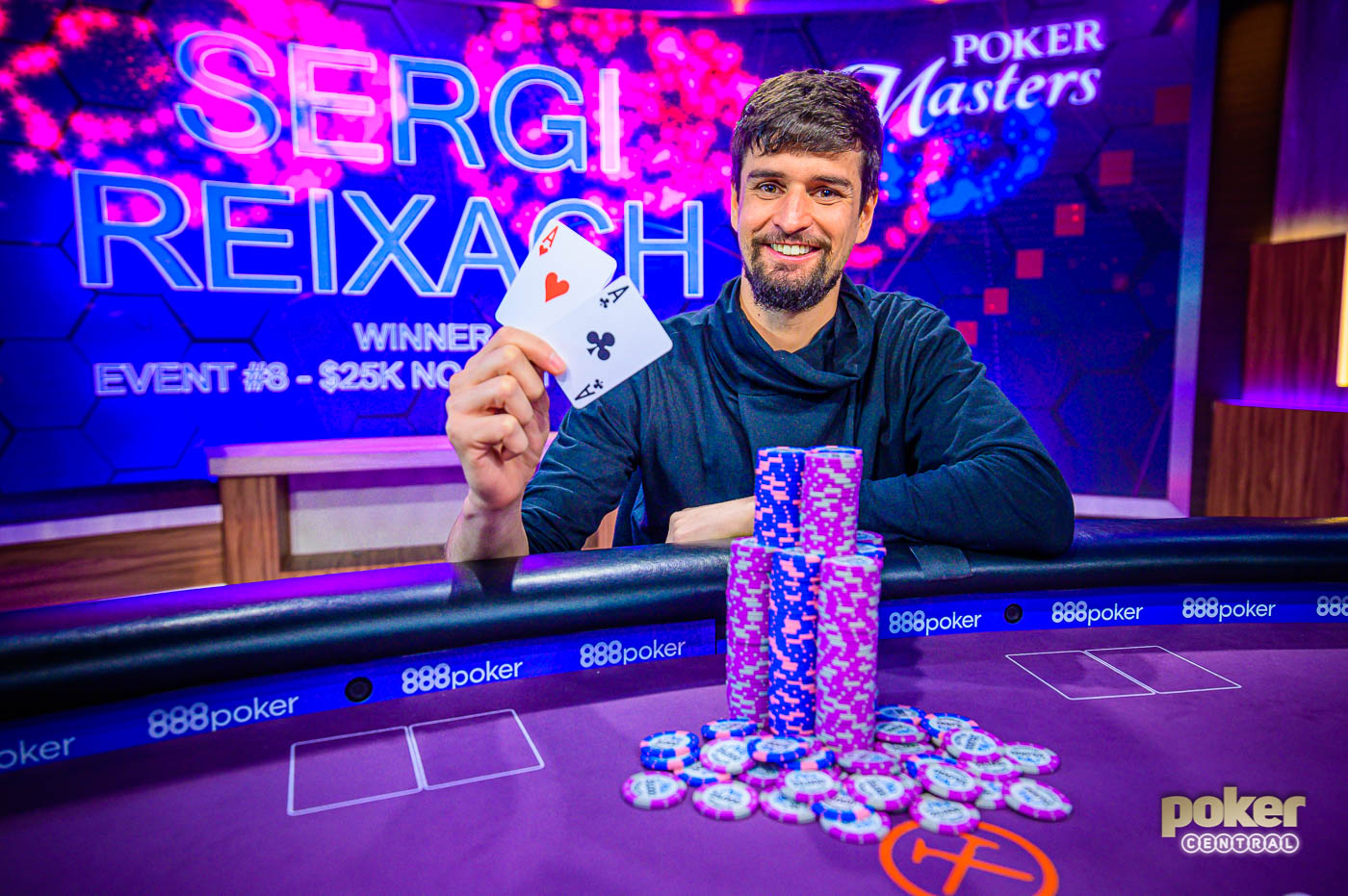 There are two events left at the 2019 Poker Masters. Event #9 $25,000 No Limit Hold’em is now underway and can be followed through the Live Reporting page. The $50,000 Main Event gets underway tomorrow and streams its final table on Thursday. New to PokerGO? Subscribe right now. Read the full winner interview right here.

Watch the Final Table on PokerGO at 4pm ET 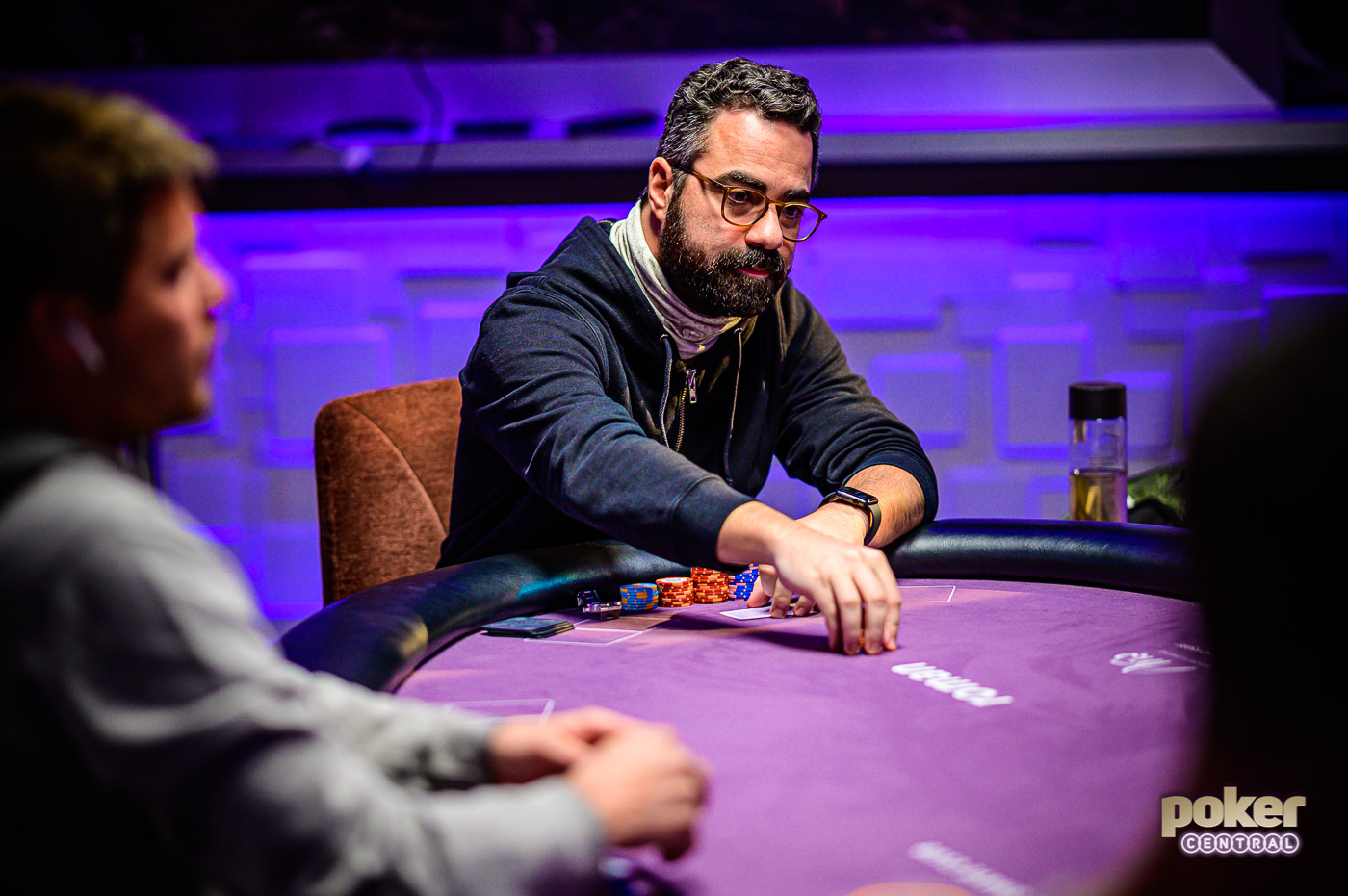 Get set for another thrilling Poker Masters final table on PokerGO today! Lead by Orpen Kisacikoglu, this $25,000 No Limit Hold’em final table will see Sam Soverel grab the Poker Masters Championship lead as he’s one elimination away from overtaking Chance Kornuth on the leaderboard. If Soverel finishes in sixth place he’d tie Kornuth and fall just $3,100 in total cashes short of overtaking him.

Watch it all unfold live on PokerGO at 4:00 pm ET in the player below! 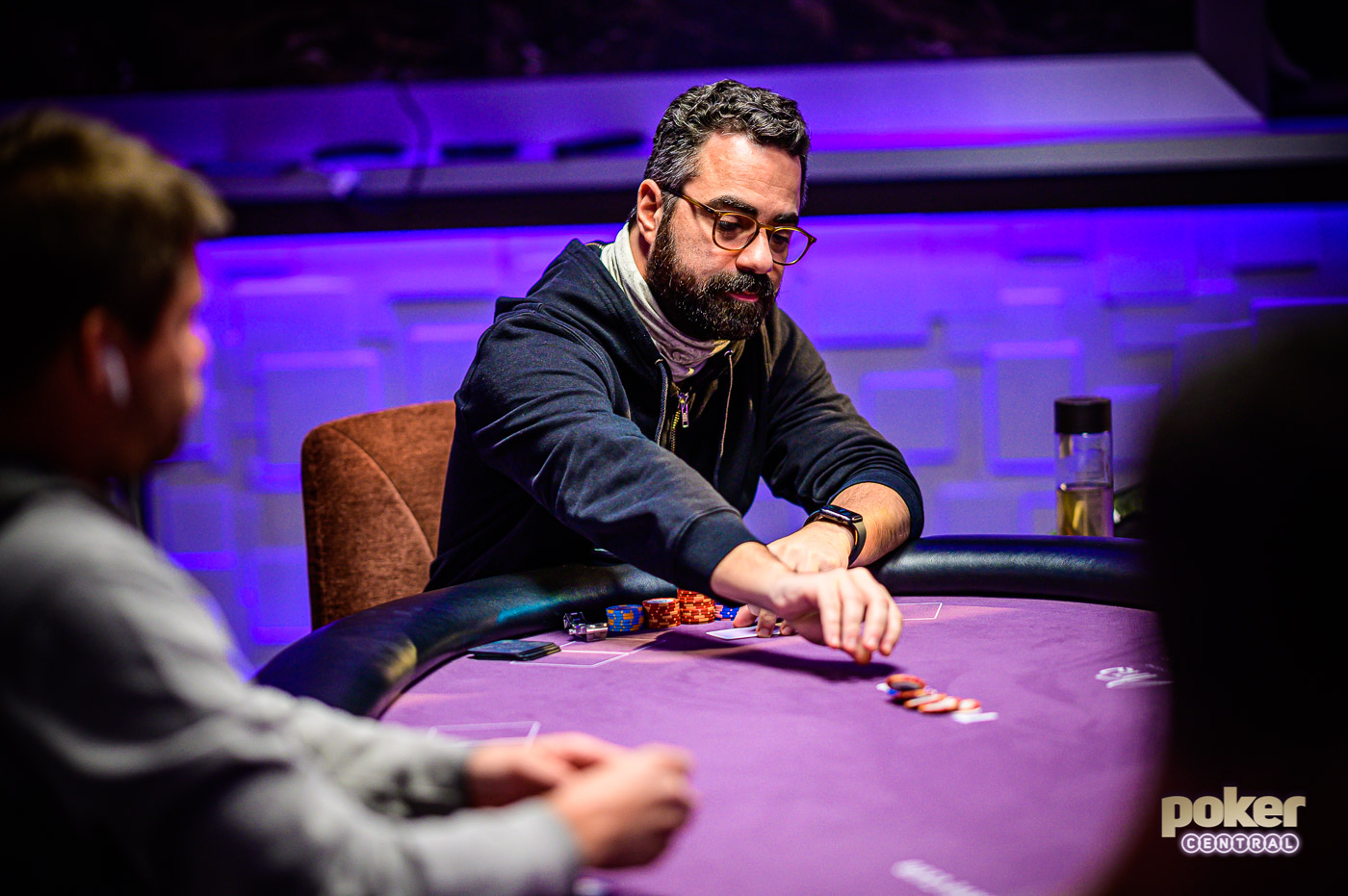 The race to claim the Poker Masters Purple Jacket is beginning to heat up in the 2019 Poker Masters as the PokerGO Studio played host to Event #8: $25,000 No-Limit Hold’em. With only two more events after this one, a field of 41 entrants would take a seat in the field, and it would be Orpen Kisacikoglu finishing as the chip leader heading into Tuesday’s PokerGO streamed Event #8 final table.

With No-Limit Hold’em events to close out the remainder of the 2019 Poker Masters, a total of 29 players would enter Event #8, and each would have different goals from collecting their first cash of the series or to rise up the Poker Masters Championship Standings. The action flowed a constant rate throughout the day, but a late influx of players saw four full tables in operation once registration closed with 41 entrants creating a $1,025,000 prize pool.

Once the overall points leader in Chance Kornuth was soon eliminated once registration closed, the likes of Sam Soverel, Kahle Burns, and Sean Winter were just some of the players looking to close the gap on Kornuth by registering a cash and a final table berth on Day 2. The business end of the tournament saw Burns hit the rail, while the likes of defending Poker Masters Purple Jacket winner Ali Imsirovic, along with Manig Loeser, Alex Foxen, and Anthony Zinno were all eliminated just shy of reaching the final table of eight players.

Only six spots would finish in the money, and players jostled for position before Ben Yu would be eliminated in eighth place when his suited ace couldn’t outdraw Andras Nemeth’s pocket pair. With the points on the line, and an open discussion occurring between Soverel and Winter, it would be Winter assuring himself of at least 60 points when he eliminated Nick Petrangelo when his kings held up against sevens to conclude play for the night.

Leading the final six into Tuesday’s final table is Orpen Kisacikoglu with 1,640,000 in chips. After arriving mid-series, this is Kisacikoglu’s first cash in any High Roller Triple Crown event, and his ascent into the chip lead was on the back of picking off a Sergi Reixach bluff on the penultimate hand of play. Kisacikoglu may be unknown to some, but he has been on the International High Roller scene for a few years amassing over $4.5 million in lifetime earnings that includes a 100k Super High Roller victory at the recent partypoker MILLIONS Europe for €905,937.

Second in chips is George Wolff with 950,000 in chips who is at his second final table of the series. At the British Poker Open in September, he took first and second in the only two Pot-Limit Omaha events, but this is his first No-Limit Hold’em cash on the High Roller Triple Crown. Third in chips is Sam Soverel with 920,000 who is fresh off a victory in Event #7. With his appearance at the Event #8 final table, he has moved into a points tie with Kornuth but officially sits in second place as the tie-breaker is money earned. If Soverel can finish fifth-or-better, he will take the lead and begin to extend the gap between himself and Kornuth with just two events remaining.

Fourth overall is Sergi Reixach with 785,000 in chips. Reixach made an appearance at the British Poker Open where he won Event #6 £25,000 No-Limit Hold’em for £253,000, and if it wasn’t for his bluff with seven-high on the penultimate hand of play, he would be the one holding the chip lead. Fifth on the leaderboard is Sean Winter with 470,000 and who is also looking to gain ground on Kornuth in the points standings. With this cash, Winter currently sits in third overall with 330 points, while a win can put him a min-cash shy of being tied with Kornuth. Rounding out the final table is Hungary’s Andras Nemeth with 360,000 in chips. Two events ago, Nemeth made his 2019 Poker Masters debut in Event #6, and that resulted in a fourth place finish. Nemeth will begin the final table in the big blind with 12 big blinds. 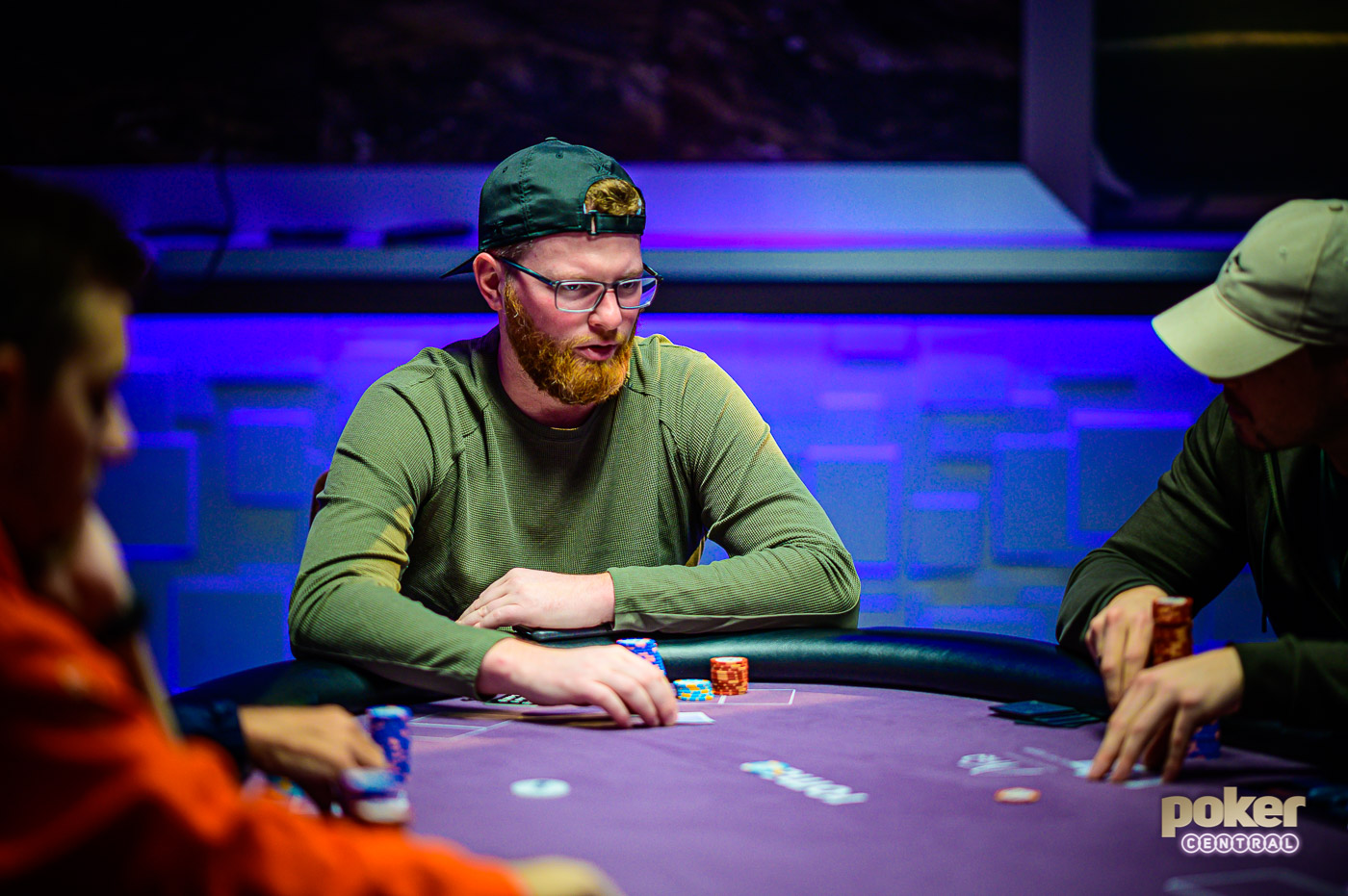 and Petrangelo was eliminated in seventh place.

Sergi Reixach raised in middle position to 50,000 and Orpen Kisacikoglu called in the big blind. The flop landed

and Kisacikoglu checked to Reixach who bet 35,000.

Kisacikoglu called, and then checked the

and Kisacikoglu checked. Reixach used a time extension and then slid forward a bet of 510,000.

, and Kisacikoglu tabled his

to collect the pot with two pair.

On a final board of

, Andras Nemeth checked from the big blind and George Wolff bet 80,000 in the hijack.

Sam Soverel raised to 40,000 from middle position and Nick Petrangelo called in the big blind.

, and after Petrangelo checked, Soverel used a time extension and then checked behind. 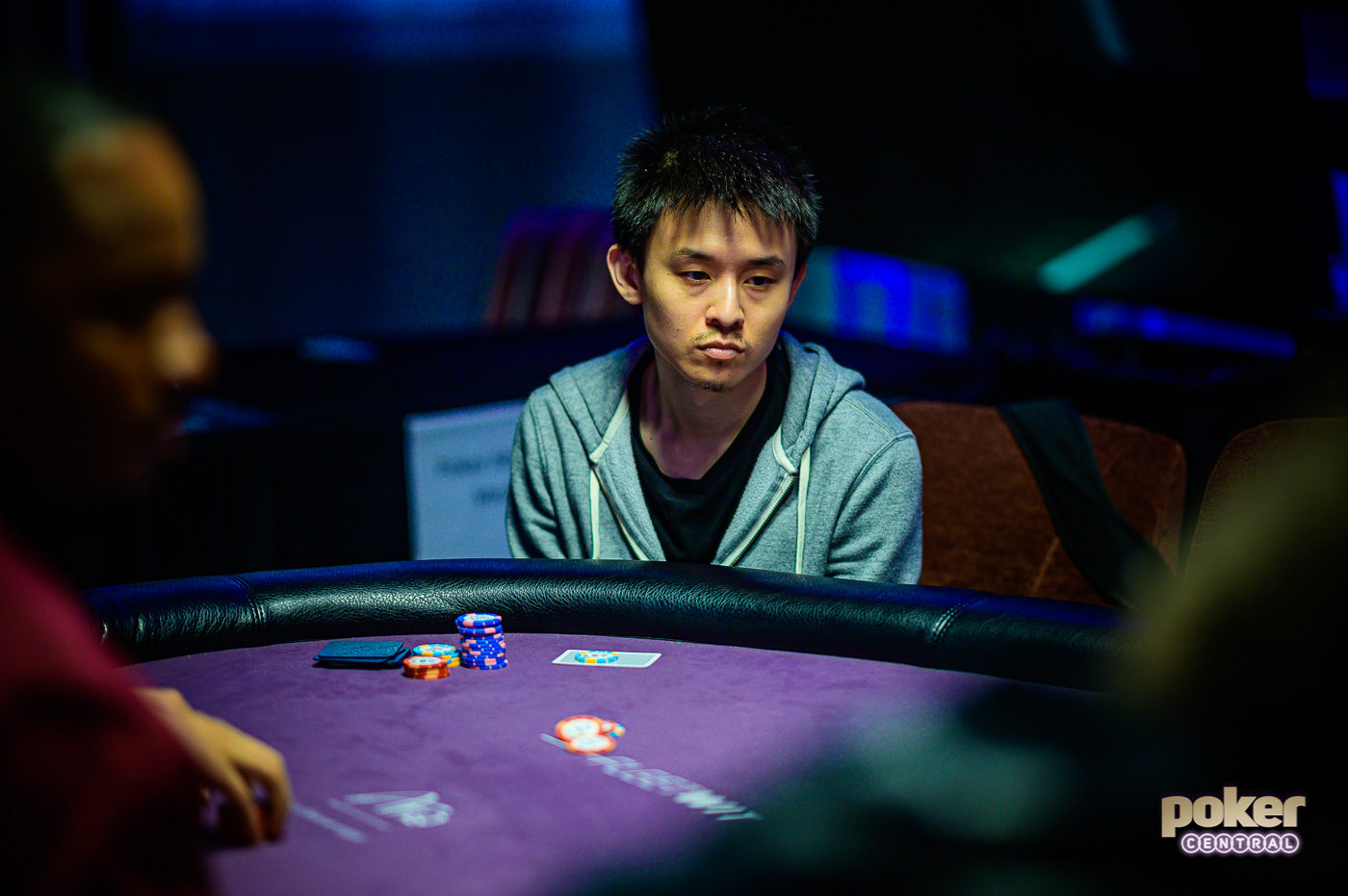 and Yu was eliminated in eighth place. 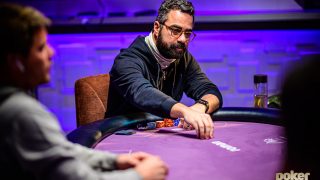 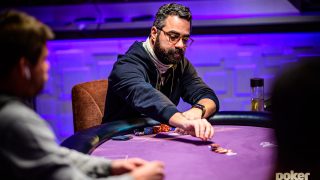 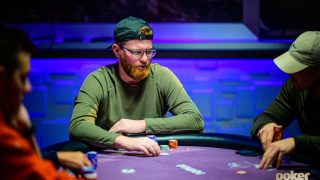 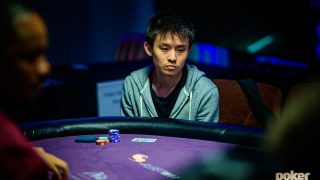 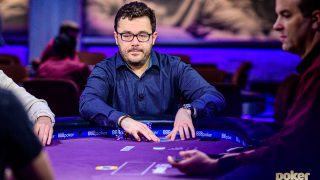 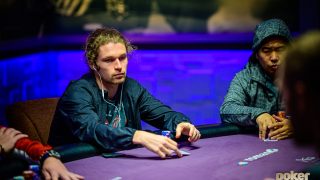 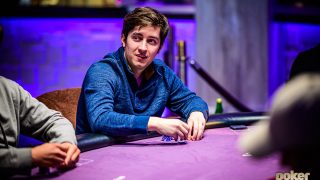 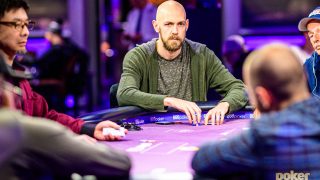 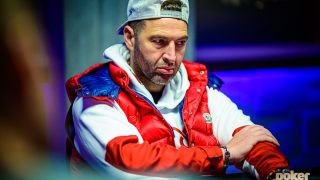 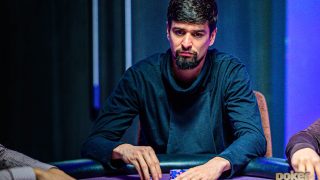 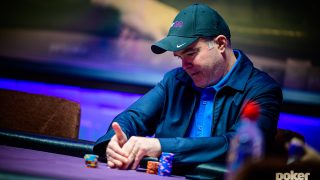 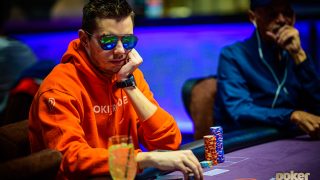 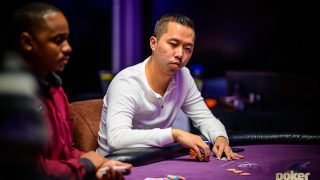 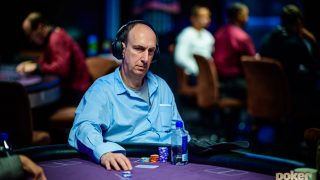