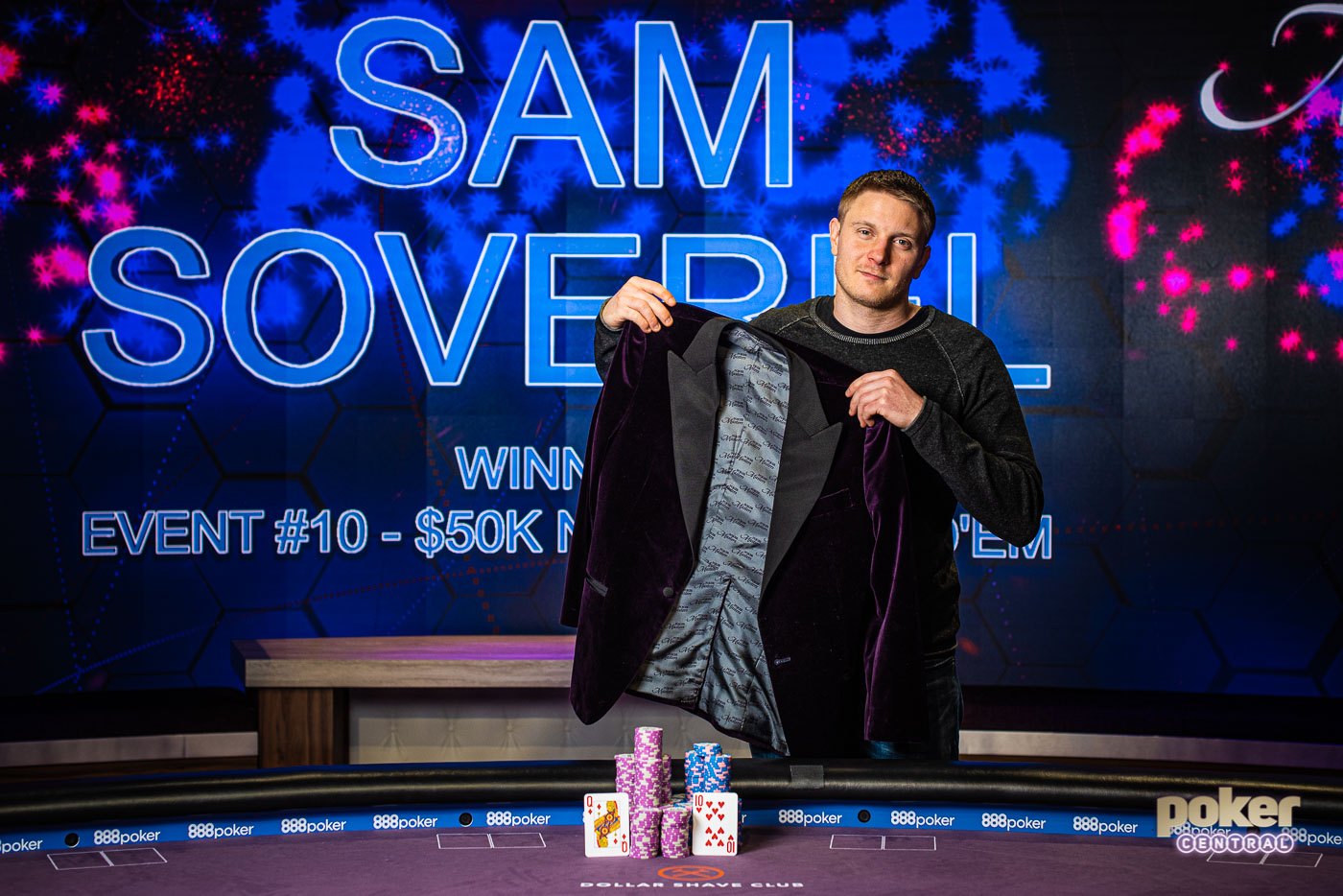 In what will go down as one of the most impressive showings in a single poker tournament series, Sam Soverel has closed out his historic Poker Masters championship run by winning the $50,000 Main Event for $680,000. In total, Soverel recorded seven final tables across 10 events, cashing for a total of $1.4 million including the $100,000 top prize for being the top points getter. On the final day of the series, Soverel both beat Chris Hunichen heads-up in the final event as well as receiving the Purple Jacket from the hands of 2018 champion Ali Imsirovic.

“It’s exciting to win,” Soverel said after taking down the Main Event and Purple Jacket. “I just like being in action all the time and when you win you get to play the longest.”

About his play, his performance, and dominance, Soverel said, “A lot of the guys I thought were really good I saw make mistakes online recently and I actually think now that the playing field is a lot more level than I originally thought.”

While Soverel doesn’t make any claims on where he stands on the hypothetical global ladder of tournament players, he does admit that he feels much more comfortable than before.

“I’m glad I don’t feel like I’m at a big disadvantage when playing these guys whereas in the past I kind of felt like that. I come from a cash background and I know I didn’t study enough and understand things like the impact of the big blind ante, but I understand it a bit better now and I think that my live background helps me a lot in the rest of the game.”

The final table of the Main Event started with six players of which one would go home empty-handed. That player turned out to be Ali Imsirovic who busted on the bubble when his top pair top kicker failed to hold up against Stephen Chidwick’s straight and flush draw. The river gave Chidwick a straight and Imsirovic busted in sixth place.

Stephen Chidwick can catch the world and @aliImsirovic needs to hold on the $50K bubble! 🥶
Watch live: https://t.co/2WejBkkB1z #PokerMasters pic.twitter.com/xUV7A2Tydf

The next big clash was between Seth Davies and Sam Soverel as the former picked up queens against the latter’s kings. This hand sent Davies to the rail and Soverel asserted himself as one of the biggest stacks trailing only Chris Hunichen. Busting in fourth place was Stephen Chidwick who found himself in similar trouble as Davies, running queens into kings. This time it was Hunichen who had kings and Chidwick exited the PokerGO Studio.

Elio Fox maneuvered himself into the Top 3 but at that point, he got coolered by Soverel in a full house vs full house clash. Holding ten-seven versus Soverel’s eights, the board ran out seven-four-nine-nine-nine, and Fox’s full house was inferior by just one pip. After calling off most of his chips on the river, Fox busted just a few hands later in third place.

The heads-up battle did not last long as on the final hand, with Hunichen facing nearly a 4:1 disadvantage, Soverel put him all in with queen-ten and Hunichen called it off with deuces. Soverel hit a queen and end the tournament.

New to PokerGO? Subscribe right now and never miss another minute of thrilling live action. Next up: Super High Roller Bowl Bahamas kicks off on Saturday, live on PokerGO.

The final event of the 2019 Poker Masters is about to reach its epic conclusion with the streaming of the $50,000 Main Event on PokerGO. The final table is down to just six players with five places getting paid as Chris “Big Huni” Hunichen is in the lead followed by Poker Masters champion Sam Soverel. Other players in contention are Seth Davies, Stephen Chidwick, Elio Fox, and last year’s Poker Masters champion Ali Imsirovic.

Watch the final table of this event exclusively on PokerGO with commentary provided by Ali Nejad and Nick Schulman. 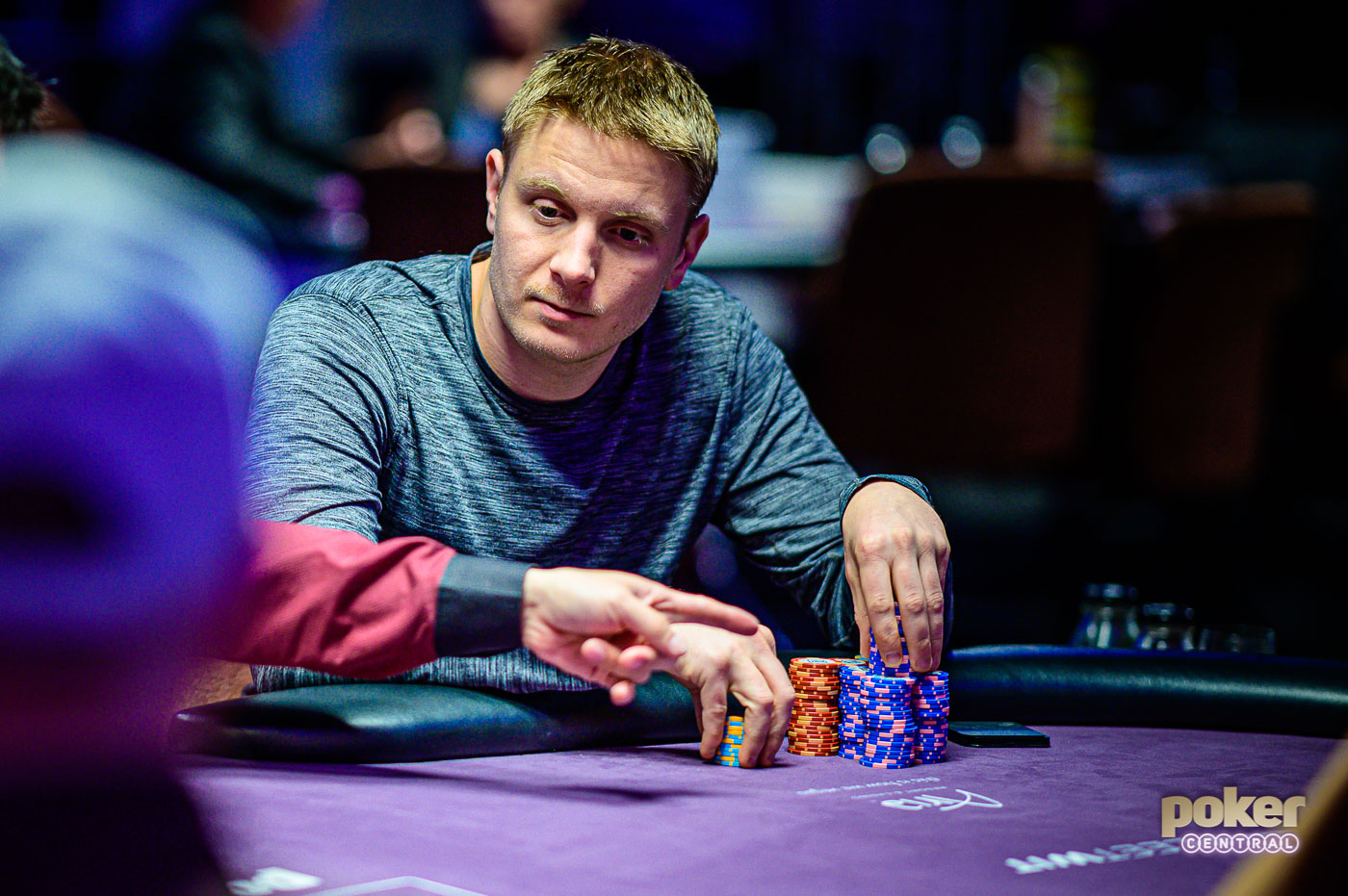 The final event of the 2019 Poker Masters is about to reach its epic conclusion with the streaming of the $50,000 Main Event on PokerGO. The final table is down to just six players with five places getting paid as Chris “Big Huni” Hunichen is in the lead followed by Poker Masters champion Sam Soverel. Other players in contention are Seth Davies, Stephen Chidwick, Elio Fox, and last year’s Poker Masters champion Ali Imsirovic.

Watch the final table of this event exclusively on PokerGO with commentary provided by Ali Nejad and Nick Schulman. 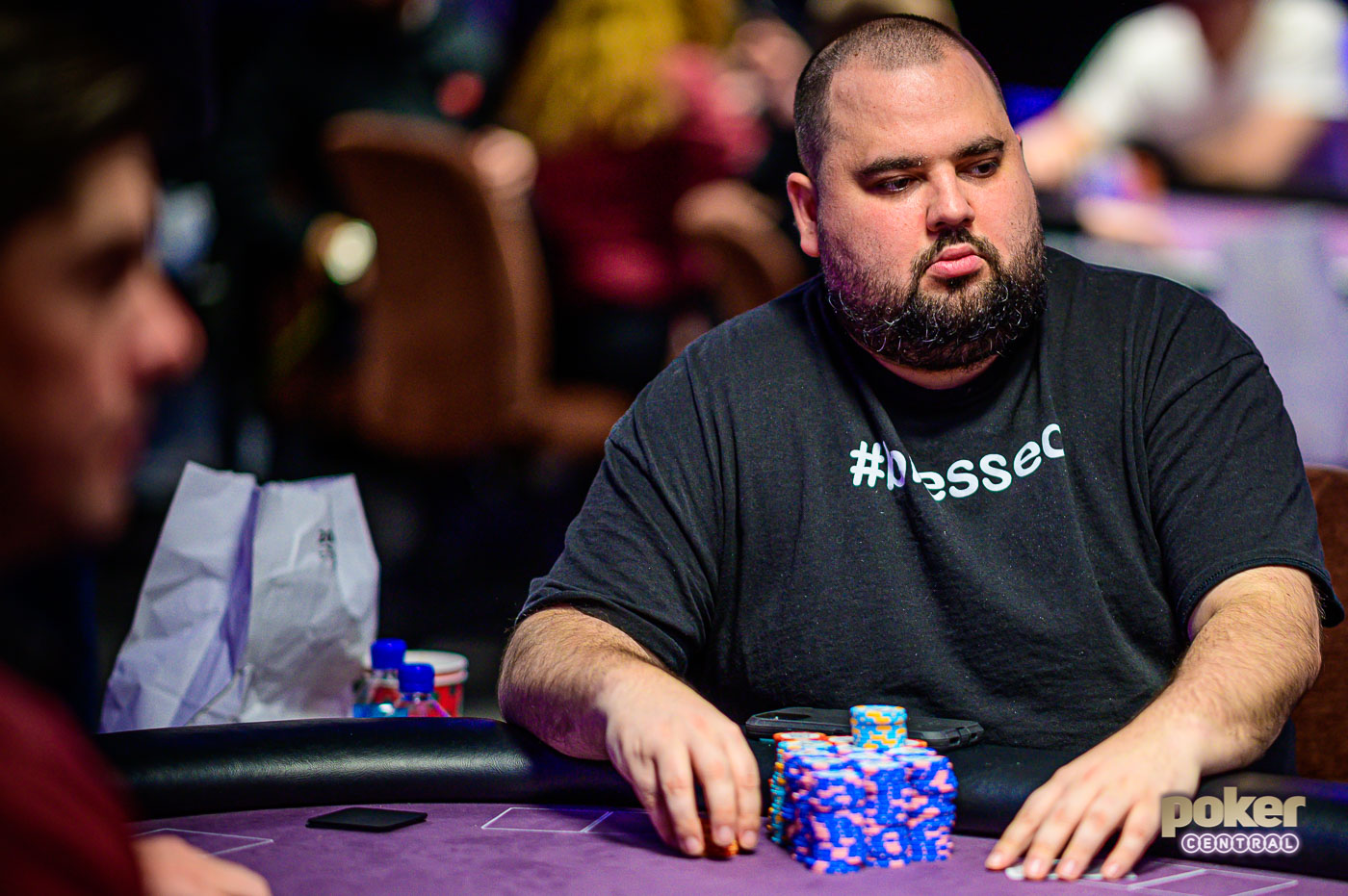 The final event of the 2019 Poker Masters saw the biggest buy-in event of the series held inside the PokerGO Studio, as a total of 34 entrants took a seat in Event #10: $50,000 No-Limit Hold’em. After 15 levels of play, just six players would remain with action currently on the money bubble, and Chris Hunichen holding the chip lead heading into Thursday’s PokerGO streamed Event #10 final table.

For the third year consecutive year, the ARIA Resort & Casino would play host to the Poker Masters, and after another full slate of events being played out from inside the PokerGO studio, the finale of the series was upon us. The 34-entrant field would be filled with 23 unique players as a prize pool of $1,700,000 would be created that paid the final five players. A min-cash would be worth $136,000, while ascending to the top would earn the eventual Event #10 runner up the $680,000 first-place prize and title of champion.

In similar fashion to the previous few events, a late influx of players would see the tournament increase to two full tables of 15 once registration closed. Players were eliminated at a consistent rate until a quick back-to-back set of knockouts Chance Kornuth and Orpen Kisacikoglu eliminated to leave the final table of nine set. With player redrawn to one table, Chris Hunichen would hold the chip lead with roughly 1.2 million only slightly ahead of Stephen Chidwick, Sam Soverel, and Ali Imsirovic.

Chips circulated between everyone for the first level of the final table, until a double-elimination by Chris Hunichen of Kahle Burns in eighth place, and Bryn Kenney in ninth place, left the final table down to seven. Just a few hands later, Alex Foxen would exit in seventh place to leave the final six players on the money bubble. Play continued until the level was complete, and play would be concluded for the night with six players remaining.

Leading the final six players is Chris Hunichen with 1,795,000. After entering the final table with the chip lead, the double knockout he delivered on Burns and Kenney saw him separate himself from the pack behind him. After playing in Event #1, Hunichen has missed the rest of the series due to a sickness that has kept him at home, but his return could result in him picking up not only his first Poker Masters cash, but potentially his first win in a High Roller Triple Crown Event.

Sam Soverel finds himself entering yet another Day 2 of an event. Finishing with 1,340,000 in chips, Soverel picked up the aggression once Burns was out as it was official that he would be crowned the 2019 Poker Masters Purple Jacket winner following in the footsteps of Steffen Sontheimer (2017) and Ali Imsirovic (2018) before him. What is more remarkable for the reigning High Roller Player of the Year is that he is fresh off winning the British Poker Open Championship where he collected four cashes and two wins. Here at the Poker Masters, Soverel has collected six cashes and one win, and what better way to be awarded the Purple Jacket then to do so while winning the final event.

Sitting in third overall is Seth Davies with 1,140,000 in chips. Davies has only been in attendance at the Poker Masters for the last few events but his decision to do so may be a profitable one if he survive into the money-paying top five. Fourth overall is 2018 U.S. Poker Open champion Stephen Chidwick with 945,000 in chips. Chidwick has only two Poker Masters cashes this series after collecting four British Poker Open cashes and one win back in September, and he’ll be looking to become the first player to win a Poker Masters, British Poker Open, and U.S. Poker Open title.

Heading into the final table fifth overall is Elio Fox with 825,000. Fox has two Poker Masters cashes this series, and if he can sneak into the money in Event #10, it will be his biggest cash as part of the High Roller Triple Crown set of events. Rounding the final table is defending Poker Masters Purple Jacket winner Ali Imsirovic with 755,000 in chips. Imsirovic has a very respectable second, third, and fifth, at this year’s Poker Masters, but fell short of being able to wear the Purple Jacket for a second consecutive year. 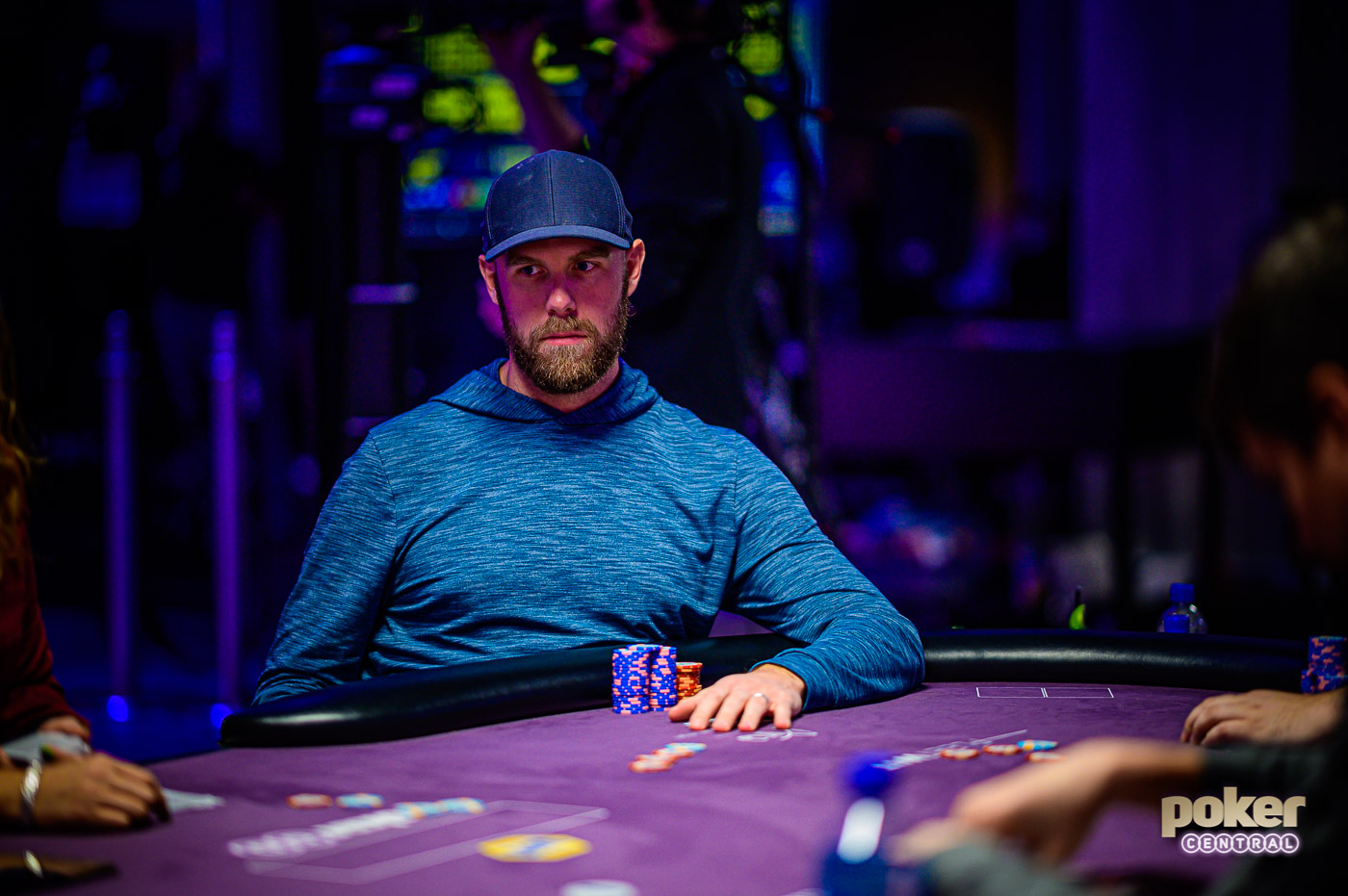 Seth Davies raised to 40,000 from the cutoff and Sam Soverel called on the button, as did Elio Fox from the big blind.

Fox and Davies checked, and Soverel bet 35,000. Fox folded, but Davies called, and then both players checked the

for fourth pair, and Soverel mucked. 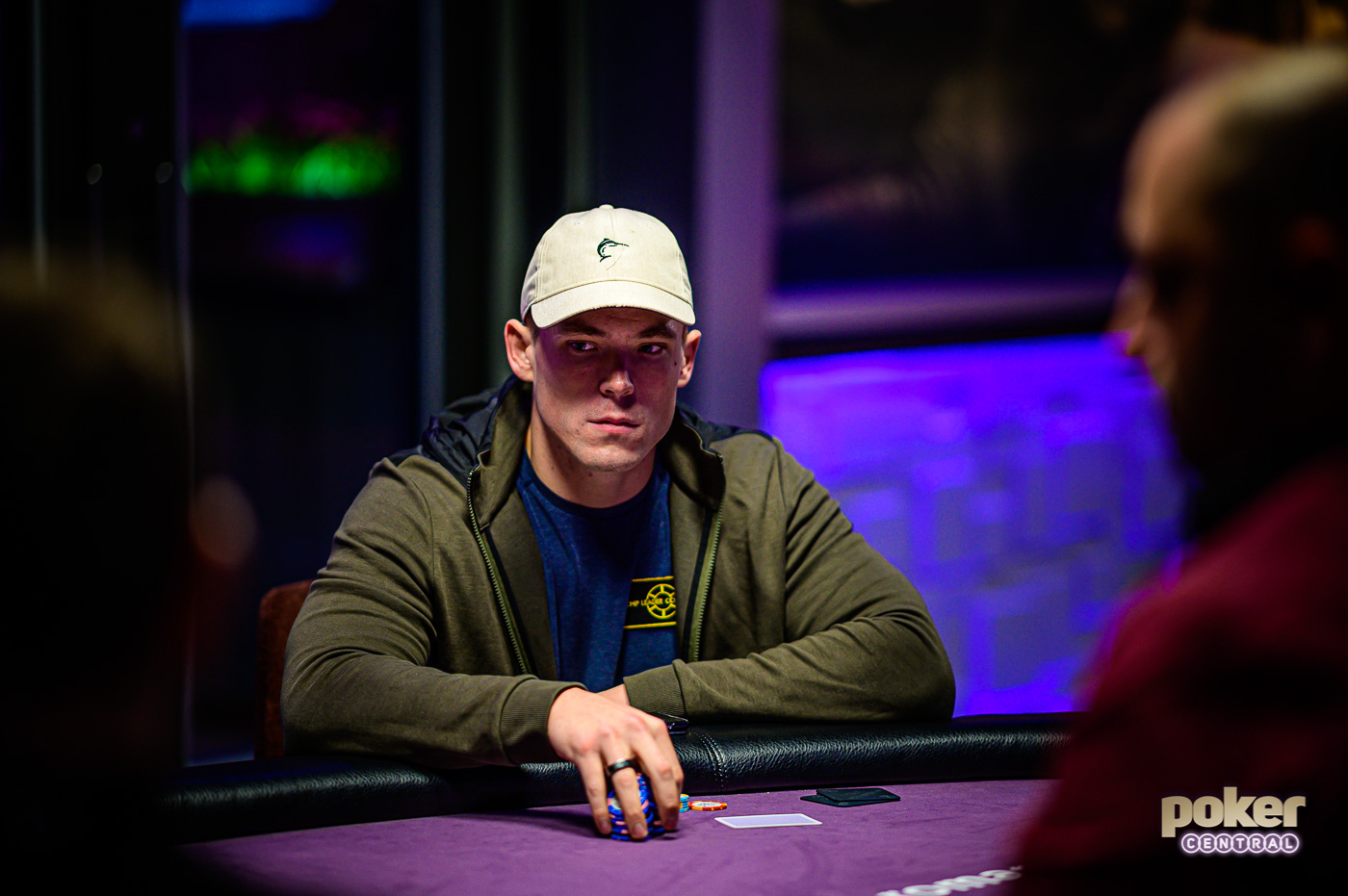 Action folded to Seth Davies in the small blind, and he put Alex Foxen all in from the big blind for roughly his last 100,000.

to be against Davies’

and Foxen was eliminated in seventh place.

Ali Imsirovic entered the pot with a raise to 35,000 from middle position, and Sam Soverel three-bet his button to 110,000.

Action folded back to Imsirovic, and he announced a four-bet totaling 260,000.

Soverel responded by announcing he was all in for roughly 1,215,000 and Imsirovic snap-folded. 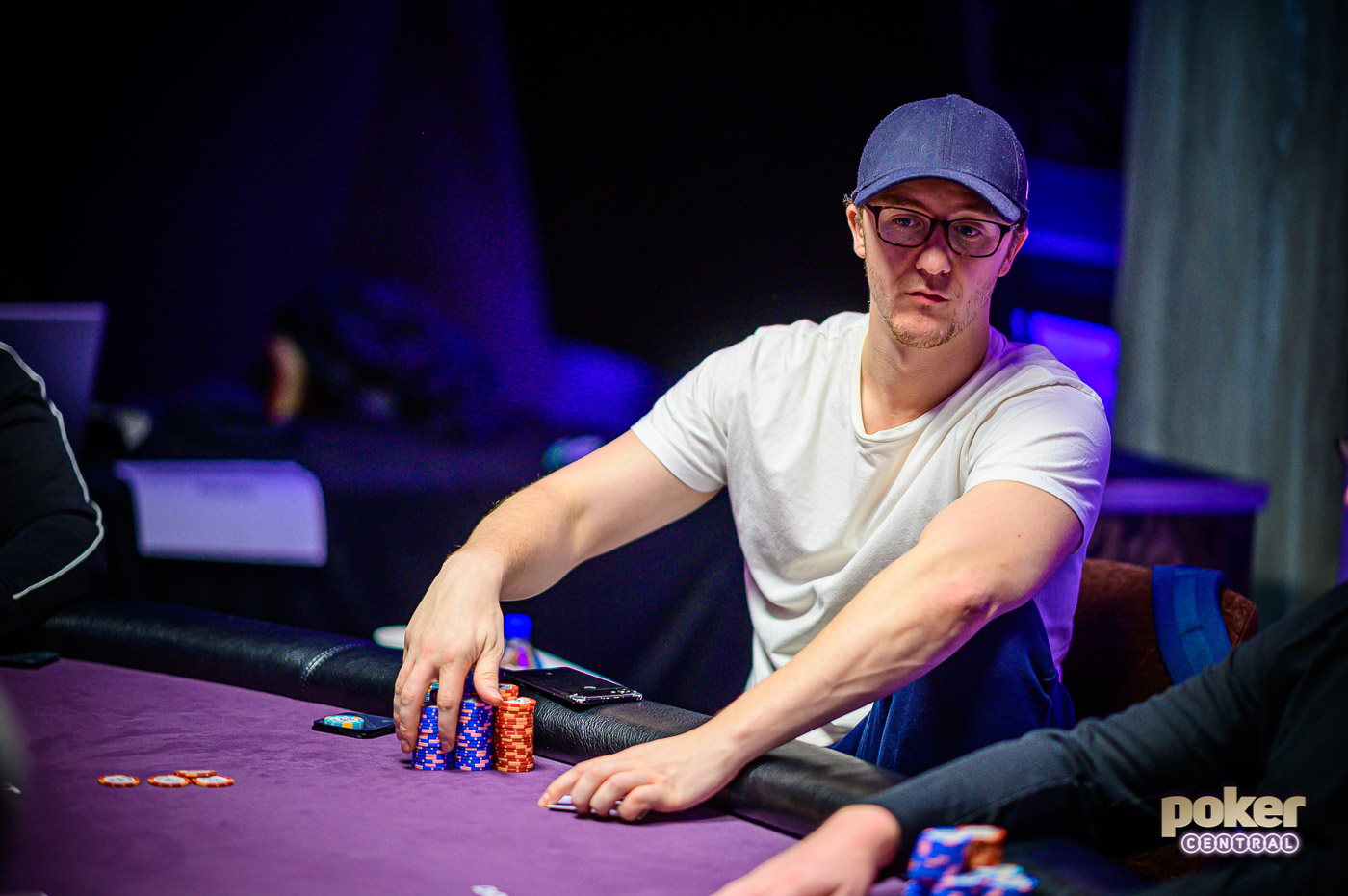 Fox folded, and after some consideration, Hunichen called.

to thrust Hunichen into the lead but leave Kenney drawing to a king or diamond, while Burns would be left with just one out.

changed little, and when the

completed the board on the river, Hunichen would eliminate both Burns and Kenney in eighth and ninth places respectively.

With Burns now on the rail, Sam Soverel is officially the recipient of the 2019 Poker Masters Purple Jacket. 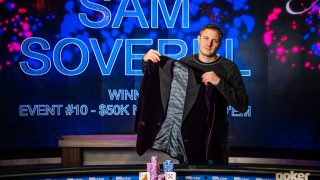 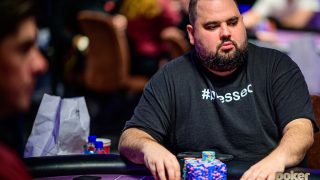 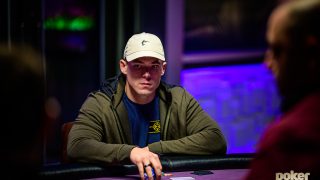 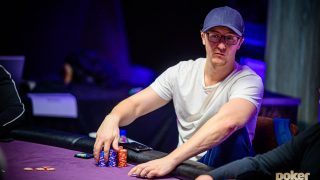 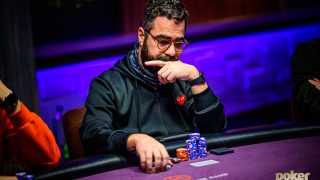 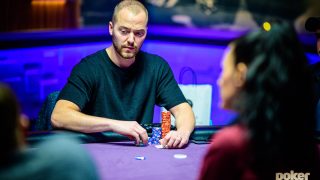 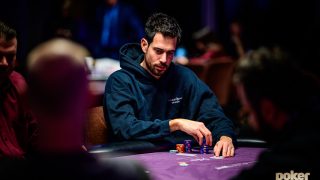 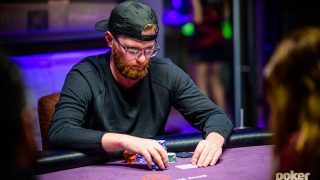 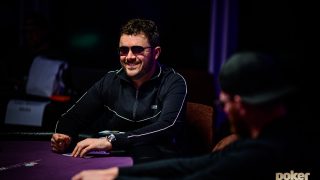 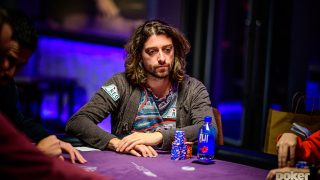 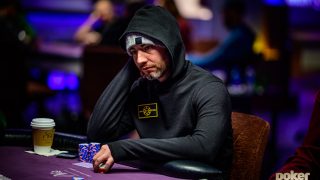 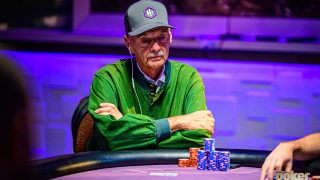 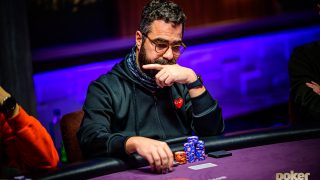