Everybody Gets Away From It

Multiple strong preflop hands did not end up with the all-in situation (preflop or otherwise) that the commentary team were expecting.  Rainer Kempe opened under the gun to 160,000 with

, flat called by his neighbour Leon Tsoukernik with

.  Next to act Kahle Burns passed his

Kempe passed his nines, Tsoukernik flat called again, leading to a heads up flop of

Adrian Mateos Busts in 10th; Down to One Table

A cool situation found Adrian Mateos on the button holding

.  Action started with a Leon Tsoukernik limp, but it soon became a heads up contest as Mateos made it 300,000 to go, Reeves upped the bet to 1,000,000 and Mateos moved in, called instantly.

runout was notably queen-free (and the backdoor spades dissolved on the turn). Mateos hit the rail, and the final nine combine on the feature table. 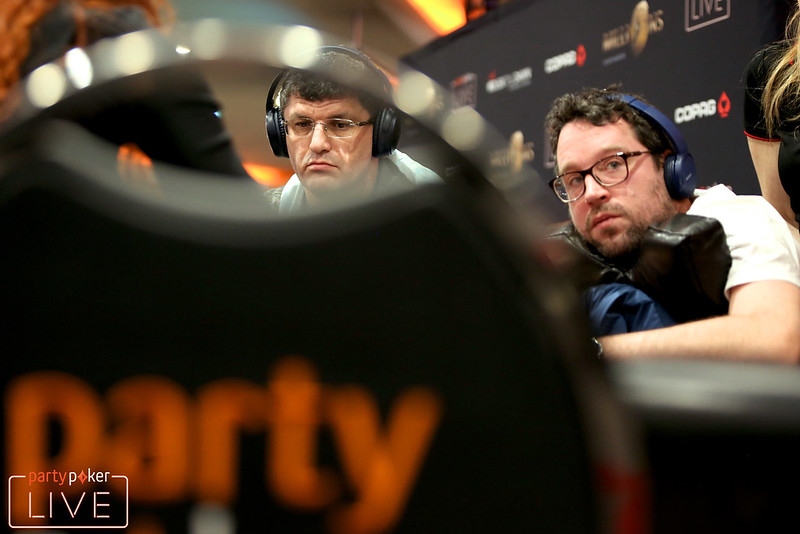 Igor Kurganov’s stack regained some of its plumpness with the elimination of Richard Trigg, a big (and close in the count) all-in confrontation in which

failed to improve vs.

board.  Trigg places 11th, still far from the cash at five players.

Christoph Vogelsang Out in 13th, Quickly Followed by Badziakouski

After returning with just 290,000 for Day 2 and making a sterling attempt (initially successful) to grind up a stack, the doubling of Leon Tsoukernik spelled the beginning of the end for the highly experienced Christoph Vogelsang.  Never regaining a challenging stack, his last hand involved his final chips heading in preflop with

, given a spin by

.  The board brought two pair for his opponent.

A tricky hand for Mikita Badziakouski saw him follow Vogelsang to the rail.  Seeing a heads up flop of

in position against Adrian Mateos, he bet 350,000 when it was checked to him.  He had, after all, hit this flop with

– not, as it turned out, as hard as Mateos, who held

Both player checked the

turn (on which Mateos filled up), and the Spaniard checked one more time when the 9s fell on the river.  Badziakouski now bet 590,000, committing his last 180,000, which went in with a wince when Mateos put him all in.  Exit TV stage right.

It Started with a Limp

Preflop escalation alert! Yair Bitoun limped for 60,000 under the gun and it folded round to small blind Steve O’Dwyer, who raised to 240,000.  Big blind Richard Trigg thought for a moment, then pushed forward a bet of 700,000.  Back to O’Dwyer, who took a little time of his own (not, however, enough to dive into the timebank cards) and then moved all-in, to a snap-fold from Trigg. 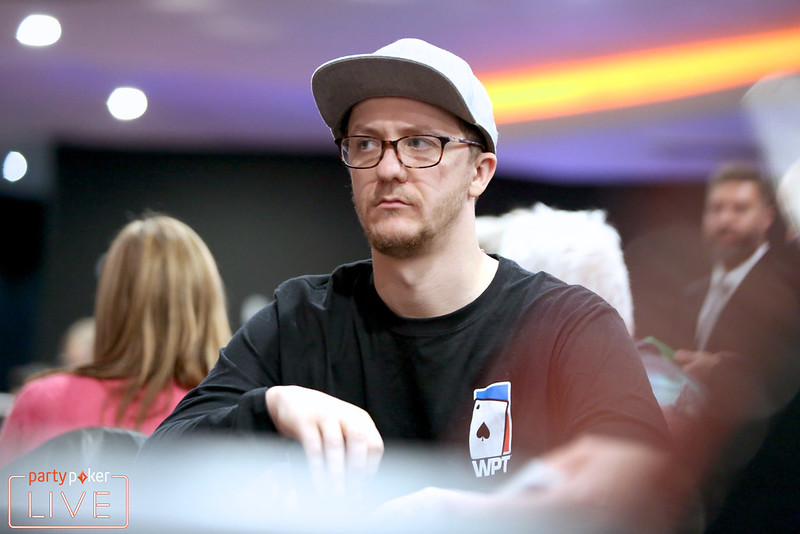 Kahle Burns (pictured) was just involved in two all in situations in a row vs. much shorter stacks. The first was a blind vs. blind match-up: Burns raised from the small blind with

and was shoved on (for c. 1.3 million) by big blind Prebe Stokkan, with

.  The bigger ace stayed ahead, hitting a river pair for good measure, the board reading

by the end of the deal.

The next hand, Kristen Bicknell found an open spot and

.  No help for Bicknell on the

board, and we’re left with a baker’s dozen super high rollers.

With one of the tables now about to stream, we’ll hold off the blog to run with the delay on both the TV and outer table (approx. half an hour).  Please stand by!