10 Million Chips Next To Each Other

Two giant stacks are being wielded by neighbours Jiushuang Wang and Weijie “Jervi” Zheng, and there have been a few small skirmishes between them but major fireworks are possible in the near future.

It was Gary Banks, however, who gave Wang his most recent little pot, having defended his big blind to the tune of 60,000.  There was no further betting over the

runout until the river, when Banks check-folded to Wang’s 100,000 bet.

Alex Foxen started out the shortest with a stack of just 200,000 to start the day. He survived the first half hour but has just departed the tournament area after running out of chips.

According to his former neighbor and good friend Steven van Zadelhoff, Foxen shoved with

off-suit under the gun. Another player over shoved with ace-queen and that hand held up.

We got there on the river as Kristen Bicknell was tossing in a time extension card, seemingly facing a tough decision. We asked Dara O’Kearney after the hand was over what had happened.

O’Kearney opened under the gun with a min-raise to 60,000 and Paul Michaelis called on the button. Bicknell came along from the small blind, the big blind folded.

This is where we picked up the action as we saw Bicknell eventually fold.

As O’Kearney was stacking his newfound chips, Bicknell’s neighbor Joao Vieira asked “Pocket fives?” While we didn’t hear Bicknell confirm she indeed had pocket fives, she was heard saying, “What can I beat?”

Bicknell now short while O’Kearney is up to 3.7 million in chips.

Small blind Joep Raemekers made it 210,000 to go (a three-bet of an earlier open, from an unknown player) and found big blind Sanjay Patel raising once more – to 480,000 (just under half his remaining chips).  It folded to Raemakers who moved all in quickly, almost beaten into the pot by Patel.

Also flips better: Dara O’Kearney just eliminated a player to up his stack over 2.5 million.  He opened in the cutoff, three-bet by the small blind to 270,000.  O’Kearney set his opponent all in (he had under 700,000) and was called quickly.

did better than hold against

runout – they made a straight.

Apparently yesterday the Irish satellite legend was operating on just three hours sleep and feels a lot perkier having had more of a nap pre Day 2.

Marvin Rettenmaier opened the cutoff for 65,000 only to see Niall Farrell three-bet to 275,000 from the small blind. The big blind got out of the way but big stack Rettenmaier wasn’t done with the hand just yet. He four-bet to 670,000. Farrell peeked one last time at his cards before shoving all in. Rettenmaier folded right away.

The tournament clock indicated a total of 500 players have registered for the tournament, of who 227 remain. With 500 players wagering $10,000, the $5,000,000 guaranteed prize pool is now met. Players can still (re)enter for the first two levels of play today.

Raoul Refos, who started the day as one of the shorter stacks in the room, has doubled early. He got in his stack with

against pocket aces. Fortunately for the Dutch grinder, he found a seven on the flop and a six on the river. He’s back to 765,000 now, good for more than 25 big blinds.

Welcome to Day 2 of the partypoker MILLIONS UK Main Event!

Day 1a’s chipleader Jack Sinclair leads the field with a stack just shy of 6 million in chips. In second position, we find Day 1b’s chipleader Philipp Zukernik who brings a comparable stack to the table. The absolute shortest stack belongs to Alex Foxen. Foxen, the GPI’s 2018 and 2019 Player of the Year, will start with just 200,000 in chips, the equivalent of seven big blinds.

The goal of the day is to play to the money, so a set percentage of the field. Today’s survivors will return, all guaranteed a cash prize, to the Dusk Till Dawn casino in Nottingham tomorrow for Day 3. They will be joined by numerous players that have already made Day 3 by playing the first two days of this prestigious event online on partypoker.

Levels are once again an hour long with a short break every two levels. We’ll bring you live updates throughout the day, so sit back and keep your eyes on this page as the action gets underway at noon! 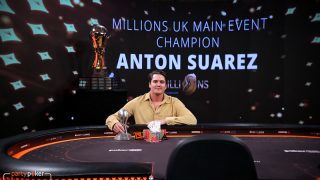