When Graham Doesn’t Win, He Chops

Chip leader Andrew Graham is maintaining (if not really increasing) his c. 4 million chip stack during Level 6, most recently playing a pot against Nicola Angelini.  On a

The turn made the three a triplet:

. No bet from either player.

The sevens were the only card that mattered; chop the pot with a full house for the pair of them.

Tamer Kamel was first to act and limped in under the gun. His neighbor Dietrich Fast over limped and Roberto Romanello (hijack) came along for 16,000 as well. Simon Deadman folded but the other players called with Jeff Kimber (button), Chris Moorman (small blind), and Jack Sinclair (big blind) all joining in.

and the blinds checked. Kamel bet 75,000 and just Fast called, all other players folded.

As soon as the

hit the turn, Kamel shoved for about 190,000. Fast didn’t hesitate and called.

With Kamel drawing dead, he was already getting up to make his exit. The

completed the board but was inconsequential for Kamel who had already left.

Kahle Burns, who won the $25,500 Super High Roller last night, was seen squaring off against his neighbor Anh Do.

We picked up the action on the flop as Burns bet 103,000 from the small blind on

turn as well. The

on the river saw the couple slow down a bit as Burns and Do checked.

. Do took it down tabling

Ruzicka Loses Aces to Queens in Battle of November Niners

The table of death is one to keep an eye on, but the table next to it isn’t one to forget about either. That table includes four WSOP Main Event final table players, including Ryan Riess who won the WSOP Main Event back in 2013 for $8,361,570. Riess wouldn’t get involved in this hand, but the other three did.

Ruzicka was in an excellent position to double up but the poker gods decided differently: [Kh10d8h]

With the fourth heart on the river, Saout made a flush and Ruzicka was left empty-handed.

Our attention was drawn by a preflop pot of over 475,000 built between cutoff Arran Fletcher and button Thomas Boivin.  The cards they’d paid for:

The juicy pot got no juicier.  Both players checked the

river and showed their hands:

– he took the pot and is up around the 2 million chip mark.

Pyzara Takes Over on the River

Rosario Sgammato raised to 26,000 under the gun +1, called by Kacper Pyzara on the button and Christoph Vogelsang in the small blind.  The flop of

saw a continue for 34,000 from Sgammato with only Pyzara coming along for the ride to the

turn.  Sgammato led out for 80,000, called once again.  The river brought the

and this time Sgammato checked.  Over to Pyzara who took over a minute to decide what to do.  His decision: bet 250,000, which won him the pot without showdown. 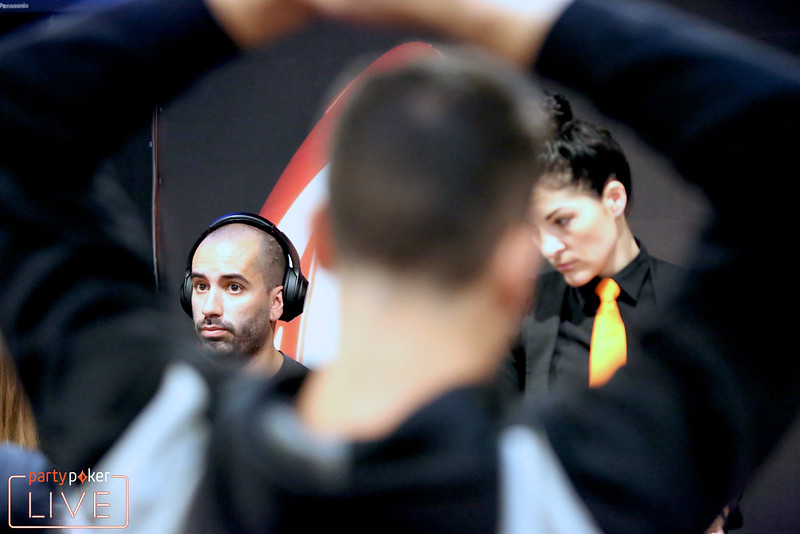 We got there on the flop as Joao Vieira was betting 85,000 into a pot of 303,000 on [AdAh10h] from the big blind. Andreas Christoforou called from the button.

on the turn saw Vieira bet 155,000. Christoforou used a time extension card before he flatted.

on the river completed the board, Vieira checked. Christoforou used another time extension card and eventually shoved all in. Vieira folded.

Besides Graham, Who Has All the Chips?