Day 1 of the partypoker MILLIONS UK High Roller Finale attracted just 25 players and a possible overlay loomed for partypoker. With a million dollars guaranteed, the tournament was in need of 75 more players or the organizers would need to pay out of pocket to make up the difference.

What seemed like a daunting task proved not as much of a problem as one might have expected at the start of the day. Before play got underway on Day 2 of the $10,300 event, several new players had signed up. And with four levels of time for players to sign up or reenter, players kept showing up. As more players busted from the Main, more players signed up for the high roller. By the time registration closed, a massive 70 more entries were done for 95 total. Still five shy of the 100 needed to make the guarantee, but it was close.

partypoker’s own John Duthie was the first player to sign up for the event on Day 1 and faired well on Day 2 as well. He led the tournament in the first break and found himself at the top of the leaderboard throughout the day. Duthie was joined by the likes of Alex Foxen, Igor Kurganov, and Kahle Burns atop the counts throughout the day and all would make it to Day 3. After the 14th level wrapped up, 17 players remained and the bagging and tagging got underway. 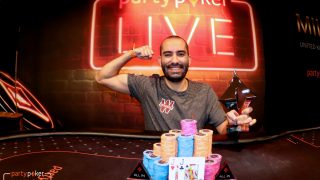