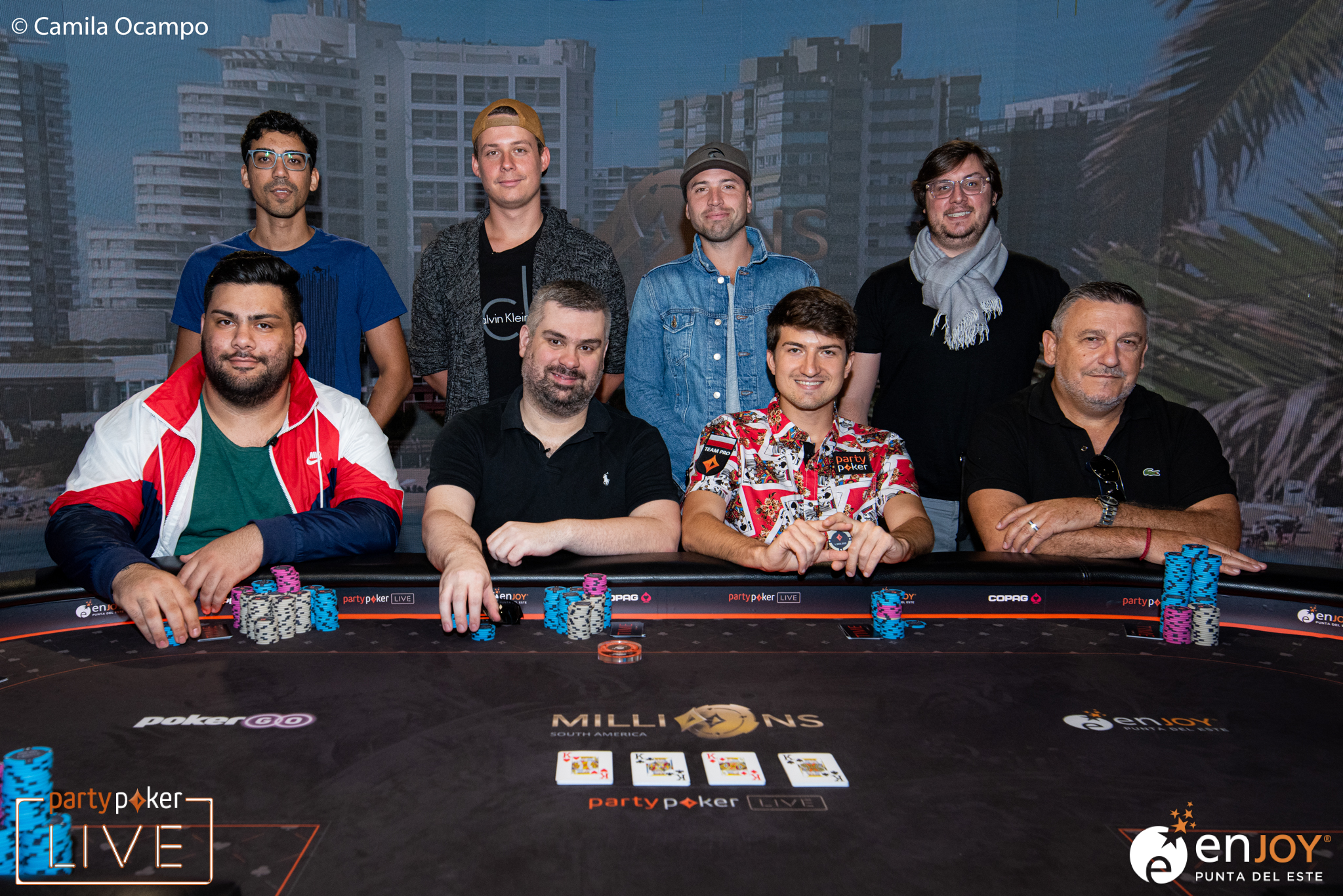 in the cutoff and opened for 2.5 million. Daniel Rezaei on the button gave it some thoughts with

but ultimately folded. Rafael Caiaffa in the big blind with

, decreasing Caiaffa’s outs as the diamonds were now good for Gumz.

hit the turn, giving Caiaffa the advantage in the hand. But the

on the river completed Gumz’ flush and Caiaffa exited in ninth place.

and put on his shades.

was added on the turn. Rezaei checked this time and Fabio counted out a bet.

Colonese checked behind and gave up as Rezaei took it down with a pair of threes.

Urbanovich Hits a Jack to Double

Dzmitry Urbanovich raised to 3,000,000 in middle position, leaving himself 100,000 behind. Urbanovich had

to get rid of Fabian Gumz. Gumz did just that and left the two to it as Urbanovich called.

Urbanovich was way behind and the

turn didn’t do him any good. The river came the

, though, giving Urbanovich the double up.

and Madeira doubled up at the start of the day.

Only nine players remain out of the 456 entries that were made live and online. Daniel Rezaei holds a massive chip lead as he has 30% of the chips in play. Rezaei was one of the online players that got through to Day 3 after bagging in the online Day 1+2.

Rezaei can easily have his biggest cash to date in this tournament. His biggest cash right now, according to the hendon mob, came in this exact tournament last year when it was held in Rio de Janeiro. Rezaei finished 9th last year and that won him $100,000. He needs to finish 7th or higher in this year’s tournament to improve on that score and the first-place prize is of course a wonderfull one million US dollars.

Gumz had a recent six-figure score up in North America when he finished runner-up in a WPT event. Gumz also won $115,150 finishing third in the Devilfish Cup about four months ago.

The tournament will continue at 12 noon local time but the live stream on PokerGO will be delayed by about an hour. They will start in level 25 with blinds at 600,000/1,200,000 and a button ante of 1,200,000. The live coverage on PokerCentral will be delayed, just as the live stream, to avoid spoiler.