Pablo Silva was first to act and found

on his button. He raised it up to 8 million and the action was on small blind Daniel Rezaei. The German looked down on

in the big blind and folded. Silva, though, tanked a bit and ultimately called.

flop, good for Silva. After the

on the turn, Rezaei only had a single out left in the deck. It wasn’t going to hit as the 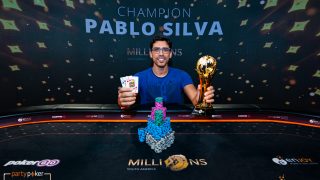