James Romero is continuing his tremendous showing at the partypoker LIVE MILLIONS South America as, after winning the Super High Roller for $325,000 to start the week, he’s not one of the top contenders along with Kevin MacPhee and Kenny Hallaert in the High Roller at the Enjoy Punta Del Esta Casino in Uruguay.

Day 1 of the $10,300 High Roller Finale just wrapped up and the clock shows 61 entries at the end of eight levels of play. Only 33 players bagged chips but late registration and the reentry period is still open until the start of level 11. The tournament will continue at 1 pm local time and will play down to a winner.

The day started with eight players divided over two tables but the field quickly grew. Plenty of notable names and familiar faces entered soon after. A couple of the players that managed to bag include Cassio Kiles (5,665,000), Brunno Botteon De Albuquerque (4,305,000), and James Romero (3,000,000).

Late registration and reentries are still possible for the first hour and a half when they continue tomorrow and play down to a winner. The first blind level will be level 9: 15,000/30,000 and a button ante of 30,000.

With registration remaining open for several more levels, the $10,300 Super High Roller Finale is already up to 48 entries. From those 48, currently 40 players remain. They’re in the fifth level of the day, playing 6,000/12,000 with a 12,000 button ante. There are eight levels scheduled for the day, all taking 45 minutes.

With registration open for entries and reentries untill the third level of Day 2 starts, the 50 entries needed to make the $500,000 guarantee doesn’t seem to be a problem. The partypoker MILLIONS South America $10,300 High Roller Finale is already up to 32 entries and more players keep rolling in.

They’re currently playing 4,000/8,000 with a 8,000 button ante. The structure is similar to the Main Event, with the notable difference that levels are 45 minutes long and not 60.

Rainer Kempe is one of the players new to the event. He just busted the Main Event but is right back at it playing poker in beautiful Punta del Este.

Here are some more players that are in the mix:

With the first level almost coming to a close, more and more players have joined. Such players as Leo Fernandez, Niall Farrell, and Jacob Daniels are now in the mix with 19 players registered and 18 still playing. Antonio Martinac was the first to bust but he bought back in and has taken his seat again.

Shuffle Up and Deal

There are 11 players registered with Ryan Riess and Aaron Been in the mix. They all start with 1,000,000 chips and the first level just started.

Welcome to the $10,300 High Roller Finale at the partypoker MILLIONS South America

With Day 3 of the partypoker MILLIONS South America Main Event going on in the one room, there’s another $10,300 event starting in the other. The grand ballroom will host the $10,300 High Roller Finale with a guaranteed prize pool of $500,000.

The event gets underway at 3 pm local time with eight levels scheduled of 45 minutes each. With a break after the third and sixth level, this event should not run into the early hours. That is if the event gets underway on time as poker players can notoriously late for such events. Registration for this event remains open until the start of Level 11 (the third level on Day 2.)

We’ll provide highlights coverage of this event today and tomorrow focussing on the big stories and chip counts, and of course a Day 2 seat draw and end-of-day recaps. So check back soon! 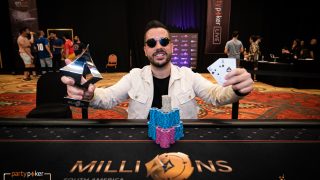