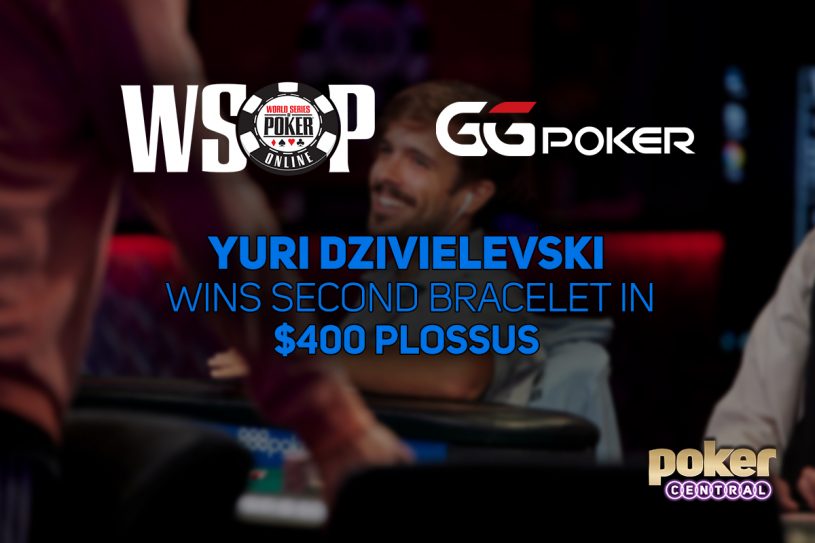 The 2020 World Series of Poker Online on GGPoker continued on Saturday with the conclusion of Event #42: $400 PLOSSUS that was down to the final table of nine players from the 4,356-entrant field. Brazilian Yuri Dzivielevski would emerge victorious after defeating Matt Vengrin heads-up to win his second WSOP bracelet, the $221,557 first-place prize, and an added WSOP Europe package.

Like the $400 COLOSSUS that concluded earlier today – won by Estonia’s Ranno Sootla – the $400 PLOSSUS also took a near week-long break with the final nine players all guaranteed $14,597 in prize money. Dzivielevski entered the final table as chip leader ahead of Gabi Livshitz, but it would be Livshitz the first to substantially grow his stack when he eliminated Marcus Cara in ninth place when his top set was outdrawn on the river by Livshitz’ flush. Dustin Dirksen and Chad Layne would be the next two to fall as Dzivielevski became the first player to hit 100 million in chips.

Juan Perez rode several doubles through Dzivielevski before being eliminated by Livshitz in sixth place. After Samuel Bernabeu fell in fifth place, Livshitz then won the biggest pot of the tournament when he doubled through Tautvydas Jokubauskas. Although down to just a handful of big blinds, Jokubauskas collected several doubles before he would eliminate Livshitz in fourth place as Jokubauskas held more than half the chips in play. Dzivielevski took back the chip lead, and Jokubauskas would be eliminated shortly after when his trips were no match for Dzivielevski’s full house. Dzivielevski then entered heads-up play with Vengrin holding a greater than three-to-one chip advantage. Vengrin found a double, but his run ended in second place as both players held top pair but Dzivielevski had Vengrin out-kicked. No help came for Vengrin, and Dzivielevski was crowned the Event #42 champion.

Dzivielevski has amassed over $1.22 million in lifetime earnings and currently sits 12th on Brazil’s All Time Money List. Dzivielevski won his first WSOP bracelet at the 2019 WSOP, and now he adds his second to become the first Brazilian to be a two-time WSOP bracelet winner.

Hyun has amassed over $333,000 in lifetime tournament earnings with his best finish being a fourth-place in the 2018 WSOP $1,111 The Little One for One Drop where he pocketed $189,098. Hyun now joins Sejin Park and Sean Yu as WSOP bracelet winners from South Korea.