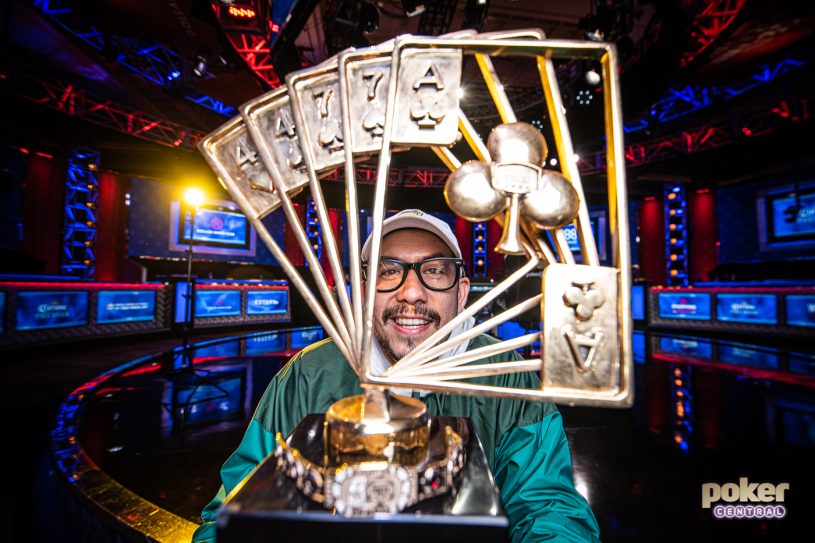 Phil Hui has the tournament win he'd dreamed about, the Chip Reese Trophy

Three men won WSOP bracelets on a huge day in the 2019 World Series of Poker. With action that has thrilled poker fans around the world, drama that could rival anything on prime-time television, and excitement that will live long in the memory, this is the story of how each player wrote themselves into poker history.

After five days of tremendous play at the 2019 World Series of Poker, Phil Hui emerged from one of the toughest field ever gathered with his hands on the Chip Reese Memorial Trophy.

Winning the $50,000 Poker Players Championship isn’t on so many amateur players’ wish lists purely because to do so would mean learning to play so many different formats of the game. To many, no limit hold’em is the entry and exit point to poker. But to those who are professional in the game of poker, winning the PPC is the pinnacle of any poker career. It’s the trophy that the greatest players all want to win, and Phil Hui admitted that it meant more to him than even winning the WSOP Main Event would.

Having triumphed over overnight chip leader Josh Arieh heads-up after five hours of intense battling, Hui won the $1,099,311 top prize and added his name to the stars of the game who have won the one they all want to get their hands on, the Chip Reese Memorial Trophy.

Want to rewatch all the action? Check out the final table in the full replay right here.

After a fantastic final table featuring a poker legend of 30 years, several PLO8 specialists and more bracelet winners than a reunion of every Tiffany’s competition winner in history, Anthony Zinno won his second WSOP bracelet.

With players such as Erik Seidel, Scott Abrams and Jordan Spurlin all bowing out ahead of the final four, Zinno would outlast the experience of Jon Turner, the dedication of Thomas Schropfer and a man in Rodney Burt who “knew what he was doing” according to Zinno himself when he spoke to us following the event.

FORESMAN IS FIRST AS GIVENS IS DENIED HEADS-UP

Joe Foresman won his first-ever WSOP bracelet as he outdid experienced player Will Givens head-up to claim the title in the $600-entry No-Limit Hold’em Deepstack Championship.

With 6,140 total entries, Foresman, who led the entire field at several key points throughout every day of the event, won his maiden gold WSOP bracelet, and also grabbed the added $10,000-value seat into the 2019 WSOP Main Event.

What was most incredible was that Foresman claimed his first ever live tournament result, meaning that his record on sites such as The Hendon Mob is unblemished by anything so minuscule as a runner-up finish. Foresman banked $397,903 and took home the treasure of a WSOP gold bracelet with his rail celebrating wildly as he achieved his poker dream.