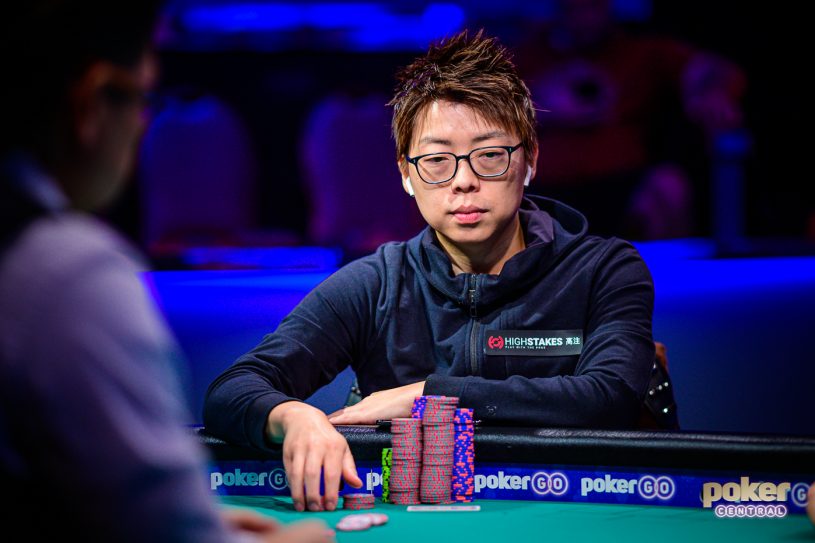 Joseph Cheong on his way to becoming a WSOP champion

On one of the busiest days of action in this year or any year’s World Series of Poker, no less than four WSOP bracelets were handed out to winners at the Rio All-Suite Hotel & Casino. With two first-time winners that were overdue their victories and one legend of the WSOP who drew level with his heads-up opponent, it was a day for the history books.

Joseph Cheong finally ended his WSOP hoodoo as he bagged the bracelet his career so thoroughly deserves, outlasting the field of 6,213 other players to take home the title of Double Stack NLHE champion. As he won the top prize of $687,782, the enigmatic Cheong even joked to our own Remko Rinkema that he was feeling a little more jaded after his victory than anything.  In truth, however, Cheong knew he had this coming and after a break for a few years, he’s now clearly one of the players to watch at this year’s WSOP.

Overcoming the less-experienced David Ivers heads-up, Cheong build up a dominating stack not once but twice after Ivers doubled back into the reckoning the first time, pocket tens holding against Cheong’s pocket sixes. There was never parity, and it was as close as Ivers came, with Cheong committed with king-jack, and hitting that king against Iver’s ace-high pre-flop all-in. A raucous rail behind Cheong celebrated with the mild-mannered man who took his time getting gold but got there like everyone knew he would.

HENNIGAN’S WORLD AS NEGREANU FALLS AT THE LAST

The warning signs were there the previous night. As Daniel Negreanu rose through the leaderboard to claim the chip lead going into the final table, only one man seemed to have the Indian Sign over him – John Hennigan. Just 24 hours later, Hennigan’s momentum against ‘Kid Poker’, the opponent who seemingly had it all to play for to claim his seventh bracelet, held firm to force equality.

In claiming the win, John Hennigan, renowned as perhaps the best Seven Card Stud player in the world, claimed the Championship and $245,451 in the process as he rounded out a spectacular win. He also levelled with Negreanu on six WSOP bracelets and extended Negreanu’s barren run in Las Vegas which stretches back over a decade. Negreanu will have strong hopes of ending that run after such a great start to this year’s series (he’s made two final tables in the first 40 open events).

At the beginning of the heads-up clash, Hennigan only had 1.5 million chips to Negreanu’s 3.7 million. But it took just half an hour for stacks to flip, and Hennigan was never so far behind again. Although the lead was passed between the two men as easily as the poker chips, it would be Hennigan who ended up with the lot, and after over three and a half hours of epic heads-up play, Negreanu could only show down a pair of fours against Hennigan’s aces up, and reflected on a ‘bittersweet’ moment afterwards.

Want to watch the whole final table on replay? Click here to take a look.

After a mammoth field of 1,216 players took part in the 40th event of the WSOP summer, the $1,500 Pot Limit Omaha event, Ismael Bojang won the long-awaited WSOP gold bracelet and $298,507 in the process. Having conquered James Little heads-up, it was the irrepressible Bojang who made the feet of his friends dance with delight at the side of the Rio stage. Surrounded by players and friends, Bojang, one of the most popular players had done it. After 75 cashes at the World Series of Poker (including 10 this year alone), Bojang finally got his hands on a bracelet win that had eluded him in his career until last night.

It was a very tough final table to overcome, with Ben Zamani coming third, and overnight chip leader Denis Bagdasarov sliding out of the door in fifth place.

With a fast and frenetic turbo format, the online no limit hold’em Deepstack event was won by New Jersey grinder Dan “centrfieldr’ Lupo, after a heads-up victory over David Clarke saw him bag the biggest prize of $145,273.90. With 1,181 entries, this busy event saw Lupo dominate from the off, and truth be told, the eventual winner was never far from the top of the order after registering.

With just three players left, Lupo won a decisive pot. Trailing along with Clarke to ‘johnsonck’, Lupo flipped for his life with pocket fives against the ace-six of ‘johnsonck’. A flopped ace looked to send Lupo skittled out of contention but a miraculous five on the river swung the pendulum of momentum his way, and just minutes later, he had made light work of both his opponents to claim the WSOP bracelet win and a huge six-figure score. There was more than $80,000 on that five of hearts on the river, and Lupo will never forget it.