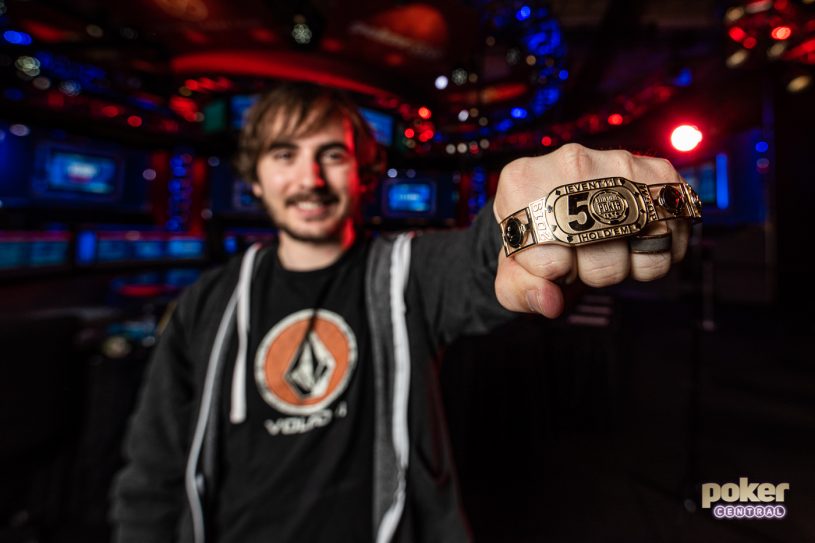 With another packed day of action at the felt complete, Day #9 was one of the busiest days yet at the 50th annual World Series of Poker. From big bracelet wins for two players who didn’t have one until now to a rollercoaster ride in the Big 50, we’ve taken a look back at what happened in Las Vegas overnight. Let’s start with Daniel Strelitz’s WSOP bracelet victory.

Daniel Strelitz wasn’t so much the bridesmaid at winning WSOP bracelets, he was more of the chief bridesmaid who got to wear the worst dress every time. In fact, so much so that his poker playing friends had been confident that his bracelet-free streak would extend through the WSOP Bracelet Winners Event, but there was to be no missing out this time.

Strelitz, who came into the final table second-lowest in chips, outlasted them all and saw Ali Imsirovic and Maria Ho depart early as both players fell just short again. By the time the heads-up rolled around, Strelitz was the chip leader, but with both men over 100 big blinds deep, it would be an epic scrap for that debut gold.

Ultimately, Shorr was the man who missed out, and he’ll look back at the chip lead he had coming into the day and wonder where it all went wrong. For Strelitz, by his own admission, his charmed life at the final table came just at the right moment. He and his friends might be in need of a lift to the Rio later in the World Series.

Want to watch the replay of the final table? Check it out right here.

Day 4 of the record-breaking Big 50 ended with just seven players still with chips, albeit millions and millions of them. When the dust settled, it was Femi Fashakin who held a massive chip lead. Fashakin, who has just under $60,000 in live tournament cashes to date, will be guaranteed to make the most money of his poker career to date and his debt WSOP result whatever happens in today’s final table, which will be broadcasted on PokerGO.

With a minimum cash of $182,192 for 7th place already locked up, Walter Atwood is the man who is nearest to Fashakin, as Fashakin has 314 million chips to Atwood’s  297 million. Others, such as lowest-stacked player Daniel Ghobrial on 101 million, will be desperate for the double-up that will be needed to fight for the $1.1 million top prize.

Who’ll become a millionaire live on stream? You know where to come.

With a busy day taking place all over the Rio All-Suite Hotel and Casino, there were pivotal moments across eight events in all. In the $10,000-entry Heads-Up Championship, Ben Yu was one of four men to make the Semifinal stage, after getting the better of the in-form Kristen Bicknell in one of the ties of the Championship. Yu, after a lot of to-and-fro action, survived the slug-fest, and he’ll battle against Keith Lehr for a place in the final after Lehr took out Jake Schindler.  Cord Garcia will take on Sean Swingruber in the other Semifinal.

Elsewhere, Yuval Bronshtein won his maiden WSOP bracelet and $96,278 after overcoming the overnight chip leader Ajay Chabra in the $1,500 No-Limit 2-7 Lowball Draw. With a record 296-entry field, the largest at the $1,500 buy-in level at the World Series of Poker, Bronshtein turned it all around in an event that had looked to be in the grasp of Chabra at several stages. Jerry Wong and Steven Tabb again posted top-four finishes to continue their strong starts to the summer.

Jason Acosta leads the way in the $1,500 H.O.R.S.E. event with 28 players remaining, while in the $1,500 No-Limit Hold’em 6-Max event, Frenchmen Romain Nussmann has a big chip lead after he ousted multiple WSOP bracelet winner Adrian Mateos with pocket aces holding against pocket jacks. While Nussmann ended the day with 8,095,000 chips, Day 1 chip leader Richard Hasnip had a tougher time at the felt, but survived to be part of the final 21 who will battle it out on the penultimate day of the tournament, Hasnip bagging up 1,615,000 chips at close of play.

Finally, Day 1 of the $10,000 Omaha Hi-Lo Championship ended with 90 players still in the draw. With 173 players entering, the numbers are at a higher level already than any year in the past five years, and with registration open until Day 2 kicks off, it’s going to be another very busy day at the felt.