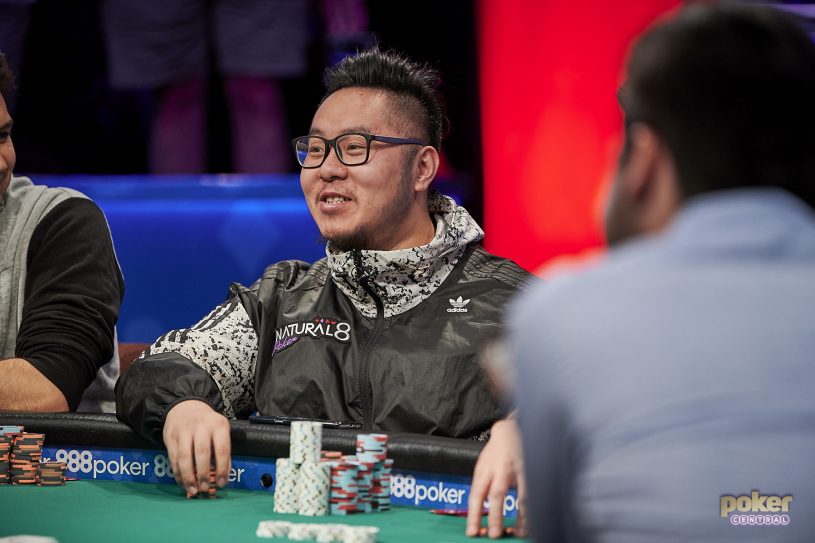 Danny Tang won the first-ever WSOP bracelet of his poker career in the Final Fifty for $1.6m

Six huge WSOP events other than the Main Event were taking place on a wild Wednesday in Las Vegas. There was a brand new winner, some big stacks in the little one and Mike Dentale had a change of heart. It’s the poker paradise that never stops giving…excitement! Here’s what happened over the last 24 hours.

Hong Kong player Danny Tang achieved a lifelong dream when he won his first-ever WSOP bracelet in one of the most prestigious events of the 2019 World Series of Poker. The $50,000-entry Final Fifty event had a total of 123 entries, meaning the winner would walk away with over $1.6 million after conquering one of the toughest tournament fields of their life.

By the time the final came round, the remaining seven players were full of bracelet winners, legends and tough-to-beat pros who simply don’t give anything away, making Tang’s win all the more impressive. Brandon Adams led the field by some distance but lost a pot early to see the chip lead change hands regularly until the final stages.

It was Ali Imsirovic who would bust first, after the only player shorter-stacked than him – Keith Tilston – found a double-up. Imsirovic busted when his shove with ace-eight was called by Brandon Adams, whose queen-five paired up twice across the board. Tilston had only bought himself a stay of execution, leaving in sixth place, but Adrian Mateos was a surprise elimination in fifth place when his move with jack-eight was called off by Adams, who had queen-jack and hit a queen on the flop to send the Spaniard home early.

It was at that point in the contest that Danny Tang moved up the ranks, escalating his stack with a series of pots won by a fine margin here or an intelligent bet there. Calling with the right hand, folding when he had the worst of it, Tang’s ascent coincided with Adams’ stack moving in the reverse direction. Adams would bust to Tang when his ace-jack couldn’t catch Tang’s ace-queen, the Hong Kong player again on the correct side of a marginal moment.

That pot left Tang with four times as many chips as his two remaining opponents combined, and he applied maximum pressure to the ICM situation. Addamo would bust third and set up a heads-up between the former bracelet winner Sam Soverel and Tang.

In taking down the title, Tang’s triumph earned him $1,608,072 and his maiden WSOP bracelet. With over $6 million in live tournament earnings, $3.5m of that in the past six months, Tang has risen up the ranks under the radar a little. Having won the Final Fifty and earning his bracelet, that anonymity may never be afforded to him again.

ABOUT TURN FOR DENTALE IN LITTLE ONE FOR ONE DROP

While Dentale is currently master of the Little One for One Drop domain, others had it a lot rougher. Shaun Deeb went into play leading the field with almost 4 million chips, but busted in 118th place after a disastrous run for both his Player of the Year and his team’s $25k Fantasy League chances (he didn’t finish in the top 72 players, so scored just 1 point instead of 63 for Team Noori).

With the final 48 players taking to the felt for one last day in an attempt to run it up to becoming champion and winning both the WSOP bracelet and $690,686 in cold, hard cash, everything is up for grabs.

Former WSOP bracelet winner Michael Tureniec (710,000) will hope to add to his collection of gold wristwear, while online legend Patrick Leonard (310,000) will need to get off to a strong start to play himself back into contention.

The $1,500-entry Bracelet Winners Only No-Limit Hold’em event had a fairly quiet Day 1, with just 143 players registering for this most exclusive of bracelets, only winnable by having previously won one.

The chance to double-up or better on your gold jewelry collection without running into anyone who doesn’t have one didn’t appeal to everyone, but every player who did play was clearly a player to be reckoned with.

At the end of Day 1, it was Nikita Luther who racked up the biggest stack, with her bag filled with an amazing 538,500 chips, with others such as Michael Gagliano (354,000) and Yuval Bronshtein (277,000) unable to get near her despite fantastic days at the felt. Another player who did brilliantly was Chris ‘Jesus’ Ferguson, who registered very late and went on the attack right away, bumping his stack up to a day-closing total of 224,500 in no time at all. Others, such as Humberto ‘The Shark’ Brenes (112,000), Joe Cada (195,000) and Liv Boeree (61,500) will hope for a perfect Day 2 to put themselves in pole position for the final.

Elsewhere, Day 1 of the $1,500-entry Mixed No-Limit Hold’em/Pot Limit Omaha event saw Chance Kornuth bag up a massive 284,500 chips, not far off the leader, Corey Wright (332,500). Shaun Deeb could put himself right back in the hunt for Player of the Year if he can build on his stack of 257,400. With 1,250 entries being reduced to 340 players, the money bubble will burst on Thursday, with just 188 players reaching the money. Every one of them will be hoping for much more, ideally the WSOP gold bracelet and $304,793 top prize.