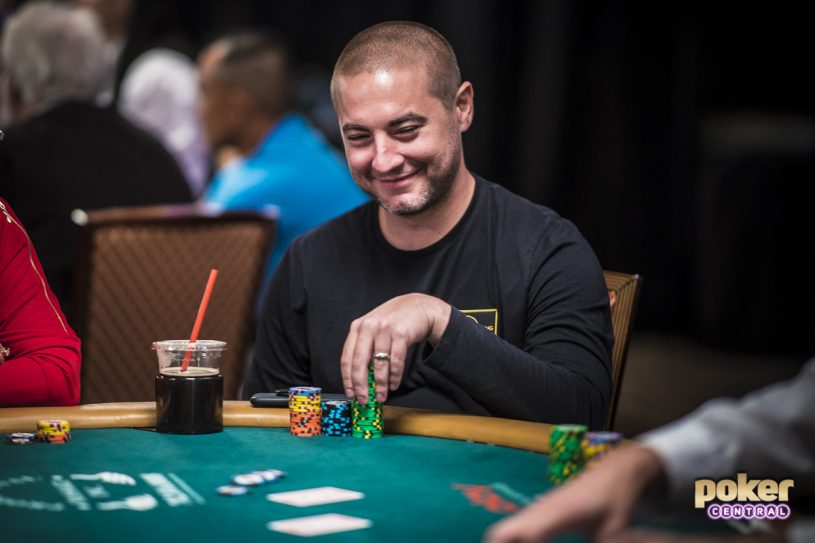 Chance Kornuth on his way to making the final dozen players in Event #5 the $50,000 No Limit Hold'em WSOP 50th Anniversary Event

If you are one of those poker fans who wait for a Phil Hellmuth explosion at the felt, then today was your day. The Poker Brat would bust not once, not twice, but thrice over the course of a tumultuous day at the felt. The Rio was packed to the rafters once again, but let’s start with the headlines that were mostly made in the $50,000 High Roller Event.

HEATH HEADS INTO DAY 3 IN THE LEAD IN EVENT #5

After two full days of play, there are a dozen players left in Event #5, the $50,000 High Roller… and two of those players are British hopefuls. Ben Heath took control on Day 2 of the event, and leads the final 12 players, holding 5,255,000 chips going into the penultimate day. He’ll have plenty of work to do to keep that lead, however, with Dmity Yurasov (4,800,000), Elio Fox (4,695,000) and Chance Kornuth (4,510,000). Others such as Nick Petrangelo, Cary Katz and Andrew Lichtenberger will have high hopes of toppling the English player, as will his compatriot Sam Grafton, though the Arsenal fan and online wizard is short-stacked by comparison with just under 2.5 million chips.

Phil Hellmuth pitched up to play the event halfway through Day 2, and immediately regretted it! The Poker Brat called three streets against Chance Kornuth, who made a backdoor flush and eliminated the 15-time bracelet winner. Undeterred, Big Phil returned, re-entering only to bust again two hands later with full house under full house against Bosnian phenom Ali Imsirovic. Cue fireworks, with some fruity language, and wildly entertaining footage for the poker fans massed o the rail. It wouldn’t be the World Series without a Phil Hellmuth blow-up!

Daniel Negreanu has kicked off the 2019 World Series of Poker in fine style, but he had a day to forget at the felt, result-wise. Negreanu busted not only the Big 50 on Day 1c, but also ducked out of the reckoning in Events #5 and #6, the $50,000 High Roller and $2,500 Mixed Triple Draw respectively. Kid Poker will surely be back in contention for the Big 50 on Day 1d, and will be pushing hard in every event to maximise his fans’ investment in him this summer.

WILLIAMSON WINNING BIG 50 ON DAY 2B

After two more incredibly busy flights of the $5,000,000-guaranteed Big 50 event, Jerald Williamson has over 4.1 million chips following the first two days of the event. He’s in a great position to push for a deep run, but he’s not the only one, with Jason Wheeler (2.07 million) and Ludovic Geilich (1.7 million) both still in contention for deep runs. Leandro Padilla and Phuoc Nguyen both topped a million chips on Day 1c to shine in the early stages of their voyage for a million dollars and a gold WSOP bracelet.

The Event #4: $1,500 Omaha Hi-Lo 8 or Better field has been trimmed to just seven players, and it’s John Esposito who will head into the final stable, streamed on CBS All Access in the lead. Holding a huge 2,330,000 in chips, the Chicago-based player who is as popular with fans as he is his fellow players already has one WSOP bracelet but will be looking to grab number two on the live on CBS All Access in the USA and available around the world on PokerGO.