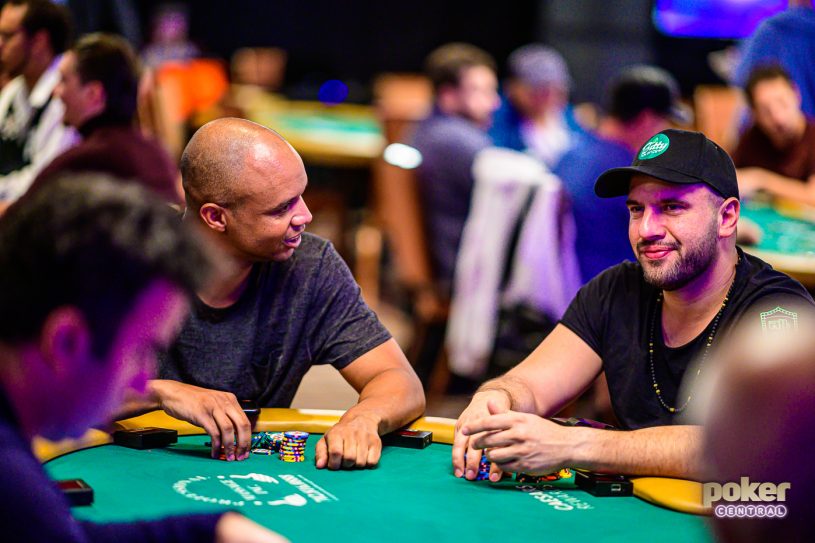 Over to you? Chip leader Phil Ivey (left) and fallen champion Michael Mizrachi exchange words at the Poker Players Championship.

With such a wide variety of tournaments, the 50th annual World Series of Poker has so far been a roaring success with huge field and massive prize-pools. But it’s the event with its lowest-ever numbers that has attracted the most attention – that’s because it’s the $50,00 buy-in Poker Players Championship. Oh, and Phil Ivey is leading with less than 40 players left in the running for the Chip Reese Trophy.

IVEY VAULTS TO LEAD IN LAST LEVEL OF PPC

With just 74 players, this year’s $50,000 Poker Players Championship may have set a new low bar for entries, but the drama is just as good as it has always been. Phil Ivey leads the field after an incredible last level of play saw the 10-time WSOP bracelet winner who disappeared from the World Series for several years jump into a late lead at the Rio All-Suite Hotel & Casino.

By bagging up 1,254,000 chips, Ivey took the lead from the most consistent player across the day, that being John ‘World’ Hennigan, who totalled 1,209,000 at the close of play. Due to Hennigan’s success this series – he’s already beaten Daniel Negreanu to a bracelet, much to the latter’s chagrin – Hennigan will be seen as one of the favourites when play resumes on Day 3 tomorrow.

The late registration of poker legend Tom Dwan gave everyone pause, after all, the phenomenon hadn’t cashed for almost seven years at the World Series of Poker. Sadly for him, that run continued, albeit only after a gutsy display and last level exit.,

Elsewhere, defending champion and three-time PPC winner Michael Mizrachi couldn’t survive the day, while Prahlad Friedman, a recent guest of Remko and Brent on the all-new Poker Central Podcast is still in with a chance of glory. With 38 players remaining and only a dozen going to cash for any profit, Day 3 may not yield the money but will need to be overcome for the legends that are still let battling for the Chip Reese Trophy and the top prize of $1,099,311.

ECTOR THE MAN TO BEAT IN MONSTER STACK

Benjamin Ector leads the last six players into battle at the $1,500-entry Monster Stack final table, which is set to begin at 4 p.m EDT on Wednesday, June 26th live on PokerGO. After the dramatic exit of fan favorite and sarcoma cancer sufferer Kevin ‘Racks’ Roster, who lost a coin-flip with pocket queens unable to hold against an ace-king that cruelly hit on the river, it was Benjamin Ector who ran up a chip leading stack on Day 4 of this amazing event.

With 49 players in seats at the start of play, 20 players were busted from that number before the players got to step away from the tables on their first break. With Ector ending play on 84.3 million chips, he was folloeed in the chipcounts by Kainalu McCue-Unciano (68.3 million) and Gregory Katayama (55.1 million). With Bart Hanson (40.6 million), French player Vincent Chauve (36.7 million) and outsider Igor Yaroshevskyy (17 million, less than 15 big blinds) all still hoping they can outlast just five more players, action will resume on Wednesday with the final six all hoping they can bank a million dollars and win the gold bracelet.

TEAM GEIGER TOO HOT TO HANDLE?

The amusingly-named Team Geiger were off the chart on Tuesday as they dominated the final few hands of the $1,000-entry Tage Team Event at this year’s World Series of Poker. With team members Ohad Gieger, Daniel Dayan and Barak Wisbrod racking up 1,340,000 chips, they lead from Tuan Le & Thanh Tran (1,141,000), Kenny Hallaert & Steven van Zadelhoff (1,129,000), and Jason Koon & Sosia Jiang (1,072,000) to name just three duos in with a chance of outlasting several teams with three or four players. With a top prize of $168,395 up for grabs, to some high rollers, the chance to bag a bracelet might be worth far more than the money.

With just 919 players surviving from the 6,140 entries on Day 1 of the latest Deepstack (this one costing just $600 to enter), one of the players who has already reached a final table here at the 2019 World Series of Poker leads the field, with Dan Matsuzuki bagging up 868,000 at the close of Day 1’s action.

Dian Lei Zhang follows in second place (790,000), while Bobby Oboodi rounds out the trio with the tallest chipstacks, holding 764,000 as the bags were being handed out. With the $500,000 guaranteed more than quadrupled thanks to the popularity of the event, the eventual winner of this event will receive a life-changing $397,903, as well as the cherished gold bracelet that will forever signify them as a WSOP tournament winner.

Ari Engel was one of the biggest stacks in the room after Day 1 of the $1,500-entry Pot-Limit Omaha Hi-Lo 8 or Better event, with the 2019 WSOP bracelet winner totalling 216,200 by the close of play. With overnight chip leader Ray Medlin (240,100) not far ahead of Engel, the latter will already be thinking about the possibility of becoming the first player this year to win two WSOP bracelets in this 50th annual World Series of Poker.

With Engel’s maiden bracelet victory just a week ago earning him $427,399, he’s already got a 1st and 2nd place result at this year’s WSOP and should he run close again, those sort of points will propel him into top position in the race to become WSOP Player of the Year for 2019.  Others who made the overnight counts included former WSOP bracelet winners Mike Sexton (82,800), Daniel Negreanu (77,200), Joseph Cheong (73,900), Erik Seidel (45,400) Barny Boatman and Kristen Bicknell (29,400).