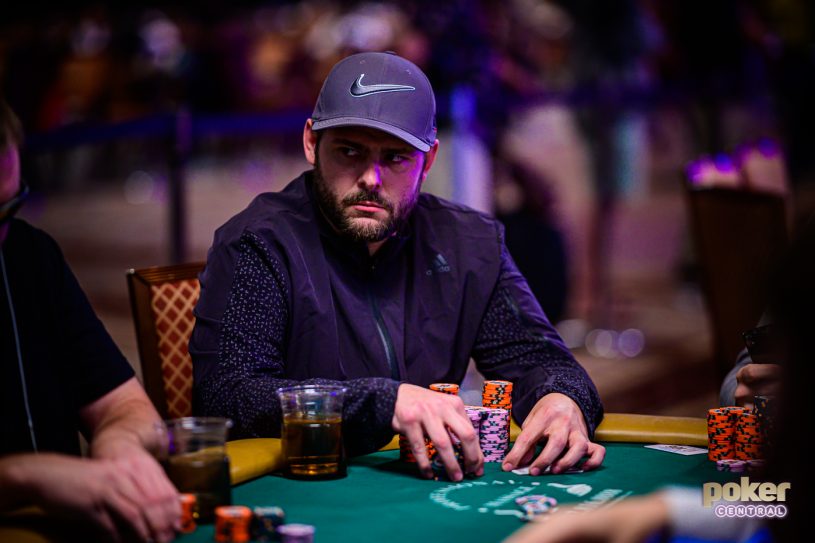 Dash Dudley took the lead through to the final day of the $10,000 Pot-Limit Omaha Championship

As the fourth week of the 2019 World Series of Poker draws to a close, there are so many events taking place that it’s hard to keep up to date with them all. Luckily for you, we’re front and centre at the Rio every day, and saw a super turbo bracelet win for a man who finally put paid to his runner-up reputation, and caught up with the other events as many tournaments drew close to the final table.

LAUCK BE A WINNER IN ONE NIGHT

Jonas Lauck ended his WSOP bracelet hoodoo after taking down the $1,500-entry Event 56, namely the No-Limit Hold’em Super Turbo Bounty event. After a day that was in its 16th hour at the end of heads-up, it was the German professional player Jonas Lauck who held out the bracelet in triumph, winning over $261,000 after his bounties in what was a rollercoaster ride for all players.

With a field of 1,867 players, the action was super-fast from start to finish, with players such as Daniel Negreanu, Kristen Bicknell and Bertrand Grospellier all making the money but not getting close to the big money. Others, such as Bryn Kenney, Kenny Hallaert and Bart Lybaert would leave before the money was even reached.

At the final table, there was quality everywhere, and the structure, while entertaining, didn’t allow for too much suspense, as each bust-out was swiftly followed by another. But Lauck had it when he got the better of Robert Bickley, who banked $160,820 and his bounty payments for a great run. Lauck, who was runner-up at the Rio just a few short years ago, had erased that memory and made one of the best ones any player can make in poker – winning the bracelet.

MONSTER STACK FOR CHAUVE AS ROSTER RUN GOES ON

With 457 Monster Stack players entering the day, only 49 survived to Day 4, with French player Vincent Chauve leading the way with 22 million chips exactly. Following him in the chipcounts is Bryan Kim (17,725,000) and Anthony Kazgandjian (15,700,000), while Sarcoma cancer fighter and charity awareness hero Kevin Roster has 3,475,000 and continues what he’s called his epic run into at least another day.

Multiple WSOP bracelet winner Ryan Hughes bagged a whopping 8,500,000 chips and will still be hopeful of banking the first prize of $1,008,850 and winning his third WSOP bracelet.

Other players still hoping to make the final day the best day of their poker career and capture the crown include James Park (4,995,000) and Jeremy Ausmus (2,405,000) who knows a thing or two about running deep.

Ten players still remain in the $800 Deepstack event, meaning another day will be required to find a winner. A busy Day 2 saw 440 players chopped down to two tables of five, but there was no break for the final table, with the average stack at 30 big blinds. It could be a fast final day, therefore, which might suit chip leader Santiago Soriano (27,300,000) who has a lead of almost 6 million chips (12 big blinds) over Daniele D’Angelo with 21,415,000 and a little more again on Amir Lehavot who stacked up 20,175,000 at the close of play.

It was a busy day for big names busting out for small money by their standards. Phil Hellmuth made the last nine tables but departed in 67th place for $3,904. One of the newest bracelet winners Joseph Cheong busted well before that in 170th place for $2,473, while Asi Moshe, who bagged his first bracelet just the other day ran to 225th place for almost treble his buy-in ($2,164). Everyone still in the hunt will be eyeing the top prize of $371,203.

Only 15 players will head into Day 3 with chips in the $1,500 Razz event, with Hollywood actress Jennifer Tilly aiming to win her second WSOP bracelet.  Leading the race to win the $119,054 top prize is Andres Korn, with the Argentinian piling up 546,000 in chips, a few bets more than Jean Said (469,000) and Noah Bronstein. Robert Campbell also made Day 3, with 200,000 chips, as he bids to win his second bracelet this series, something no-one has done so far this Series.

The $1,000-entry NLHE Tag Team event has arrived, and with 976 teams having been reduced to 278 teams and Team Jaffee (Jared Jaffee, Ralph Massey, and Aaron Massey) have taken an early lead. Ryan Riess and Phil Hui looked like one of the teams to beat and although they dropped a little at the end of play, they did enough to bag a 93,200. Felipe Ramos and Natalie Hof aren’t just tag team partners, they’re expecting their first child together, and the luck-in-love-and-also-great-at-cards duo bagged up 64,700. Just 147 teams will make the money but expect that number to be reached by the close of Day 2. Poker Central will be there every step of the way.