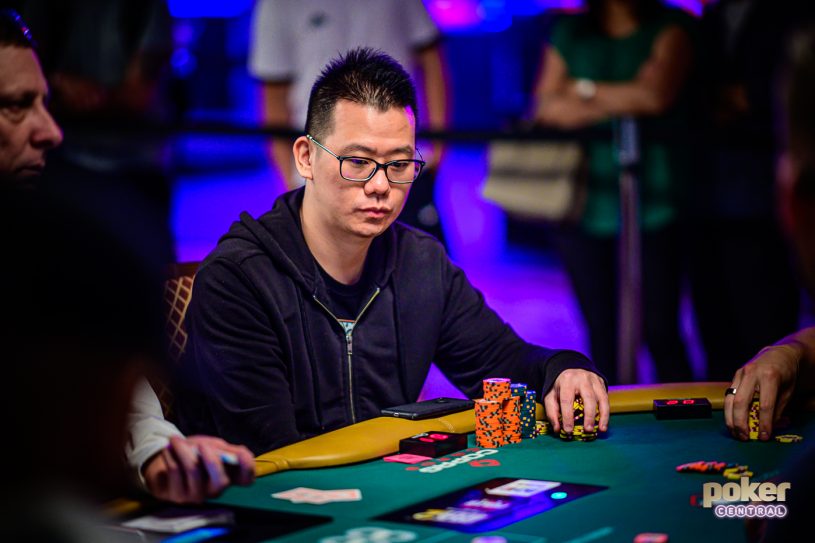 Anson Tsang on his way to cruising through the latest day of High Roller PLO action.

With five events at the World Series of Poker failing to find a conclusion last night, there are big stacks for some stellar names in the game as the chips went into the bags. Let’s start with the $25,000-entry PLO High Roller.

Popular player Anson Tsang was flying high at the end of the first day of $25k High Roller PLO action, with his stack of 4,775,000 good for a healthy lead over second-in-chips James Chen (4,140,000), and with the two players meeting in the Day 3 Seat Draw on a table that also includes Paul Volpe, the eyes of the poker world will be on the action.

With 278 entries overall, only 39 players remain in the hunt for the $1,618,417 top prize, with the eventual runner-up also guaranteed just over a million dollars. The money bubble burst shortly before the end of the day, with Dario Sammartino, Sebastian Bastian and Toby Lewis all picking up a min-cash of $37,635. However, behind Chen and the leader Tsang, there’s a big gap to players such as Alex Epstein (2,450,000, winner of the first-ever Short Deck WSOP bracelet event earlier this summer and Robert Mizrachi (2,245,000), who tweeted his delight, using the hashtag #TeamMizrachi. Other legends of the game, such as Erik Seidel (1,535,000), the aforementioned Paul Volpe (905,000), all-time tournament money list leader Justin Bonomo (815,000) and former WSOP Main Event winner Joe Hachem (215,000) all made the cut.

Johannes Becker leads the charge in the $10,000-entry Limit 2-7 Lowball Triple Draw Championship after he topped half a million chips with 32 players from the 92 entries still in the race to become the latest WSOP bracelet winner. With Becker bagging up 526,500 chips, he was followed in the counts by some real characters. Mixed game legend Benny Glaser stacked up 396,500, while British Louis Vuitton fan Luke Schwartz had 321,500 at the close of play.

Jennifer Lopez – not that one – bagged up 251,900 and Katie Lindsay totalled 245,600 in the Ladies No-Limit Hold’em Championship after a bumper total of 968 entries (272 players more than entered last year) on Day 1.  With only 261 players remaining, Lopez and Lindsay are ahead of plenty of big names, with last year’s heads-up players encountering varying degrees of fortune at the felt.

OTHER BRACELETS EVENTS AT THE RIO ROUNDED UP

On the opening day of the $2,500-entry NLHE event, one of the four Hendon Mob founders Barny Boatman is second-in chips with 263,100 chips but incredibly is still behind runaway chip leader Baitai Li who had piled up 354,800 by the time the chip-bags were being handed out. With Boatman chasing a third bracelet and the $427,399 top prize, there’ll be plenty of competition from the 200 remaining players from the 996 entries. Other notables still in the field include Kristen Bicknell (129,500), Michael Addamo (108,300) and Humberto Brenes Martin Jacobson (103,000).