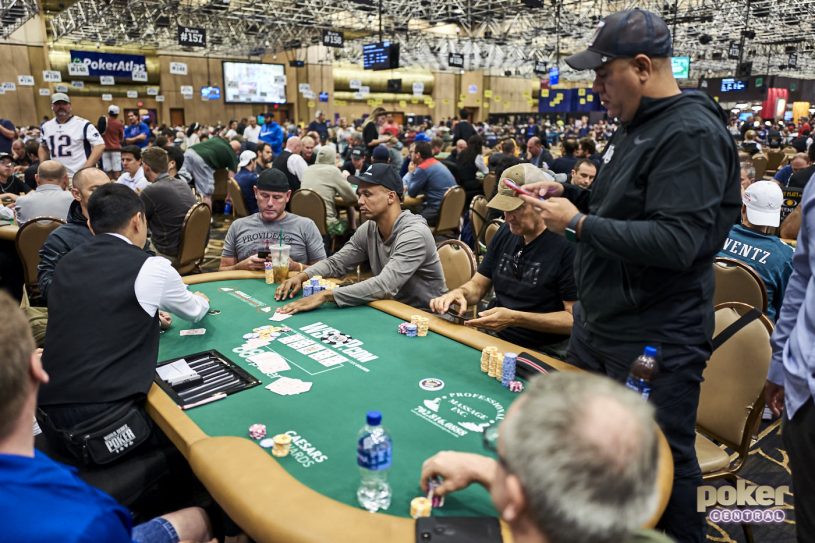 With nine events in total taking place at the felt on Wednesday, June 19th, there was high-roller and low buy-in action, with big names and new face all enjoying great days at the felt. With the Rio All-Suite Hotel & Casino a festival of fun throughout the day, we’ve already told you about the four players who took home bracelets and six-figure scores. But how did the tournaments that didn’t reach the heads-up showdown end up? Let’s play catch up.

IVEY AND LEHR BOTH BIG IN THEIR GAMES

Phil Ivey managed to make Day 2 in good chip health in the $1,500-entry NLHE Bounty event last night. With a massive 1,807 players ponying up the buy-in, the 10-time WSOP winner will be hoping he can parlay that entry into a top prize of $253,933, with only 272 players left in the running. The money bubble has burst, with everyone now guaranteed a payout of $1,414 (as well as any bounties they may have scalped along the way). But they’ll all be eyeing that quarter of a million dollars and gold jewelry on offer for being the last player sitting.

In the higher buy-in $25,000 PLO High Roller event, last year’s winner Shaun Deeb survived the day with a top ten stack of 518,500, but that wasn’t close to Keith Lehr’s bag of 692,000, marginally ahead of Paul Volpe (682,000) for bragging rights among the smart set at the end of Day 1. With 2018 champion Deeb thriving, other big names joined him in the seat draw with big stacks too.

Last year’s runner-up in the $2,500 Mixed Big Bet WSOP Event, Ryan Hughes, has the chip lead and massive incentive of winning his third bracelet to push him towards the finish line in this year’s corresponding event.

Having gone so close 12 months ago, Hughes has put himself in pole position to go one place better this time around, as he leads the remaining seven players into the final table battle with over 1.2 million chips.

Having already busted Scott Bohlman, his conqueror in last year’s $2,500 Mixed Big Bet final, Hughes will be hopeful he can outlast players such as former WSOP bracelet winner Loren Klein and closest challenger in Arthur Morris, who has 728,000 chips and a chance, being seated to the champion-elect’s direct left. Can Hughes banish the memory of last year and claim the $127,808 first place prize and the bracelet?

The entertaining mix of No Limit Hold’em and PLO saw the field of 2,403 further reduced from 195 to just nine players on Wednesday, as the $600-entry event ended play with Adam Lamphere the man to beat with 17.2 million chips. The Deepstack drama came thick and fast as British player Sam Razavi bubbled the final table in 10th to see Lamphere lead from players such as Dan Matsuzuki (14 million) and Raghav Banal (9.3 million).

With 8 million exactly, German high roller and tournament crusher Rainer Kempe will be hopeful of plowing through the field to add the $194,759 top prize to his $20 million in tournament earnings to date.

Just 10 players remain in the Super Seniors event, with all of them hoping their $1,000 buy-in will be transformed into the$359,863 top prize by one last day of great play and good luck. The chip leader going into play will be Michael Blake, who went on a demolition job during the last few levels of play, busting five other players and bagging up 12,300,000 chips.

With Kanajett Hathaitham (9,235,000) Blake’s closest challenger, other players such as Rick Austin (6,475,000) and Jeffrey Miller (5,525,000) will look to push others out of the way to put themselves in with a better shot, one such short-stack player being the multiple WSOP bracelet-winning Barry Shulman, who has just 2,665,000 to play with, but that most crucial component of any poker professional, hope.