You are here
Home > News > WSOP Report Day #17 – Howard Mashing the Seniors Event, Koppel Breaks for the Line in The Marathon 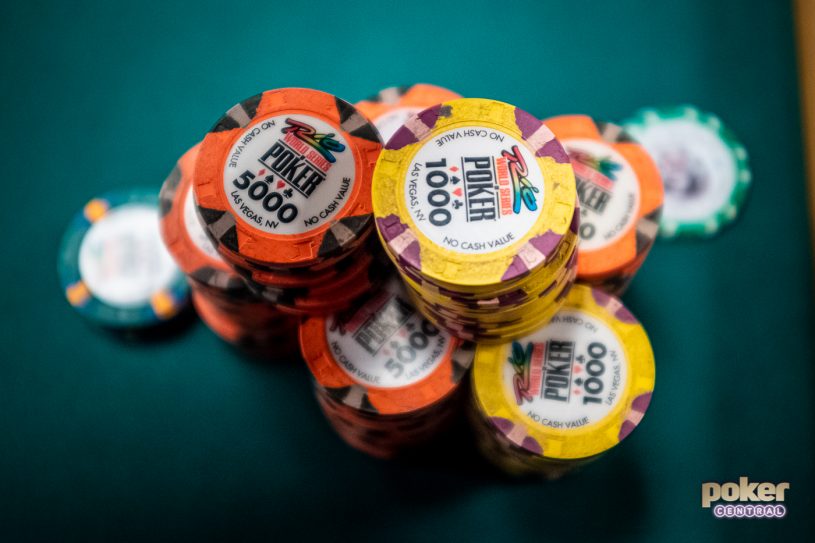 Friday night saw several WSOP events cease play for the night with only some clues as to who the eventual winner of each tournament might be. From Seniors to 2-7 Lowball and everywhere in between, we round up the best of the day’s action in ongoing WSOP events.

After two days of action in the $1,000-entry Seniors Event, it’s Howard Mash who has the biggest stack in the counts. After the field of 5,916 players was reduced to a little over 1,700 players after Day 1, Day 2 saw the money bubble burst, with 888 players reaching the payouts, former WSOP Main Event champion Greg Raymer, Debbie Espe and John Krueger just three of the players who busted before that shift in mood rippled around the room.

With just 252 players remaining in the hunt for the WSOP bracelet, it is Mash who will sit behind the biggest stack when play resumes, stacking up just over 2 million chips. He is followed by Anthony Martin with 1,759,000 and Victor Ramdin with 1,688,000, those three men the only ones who have more than 1.5 million in chips. Other players to survive the day included Barry ‘Ace on the River’ Greenstein and Layne Flack, and Day 3 is sure to be a day full of high-profile bust-outs and double-ups.

TRAN GOES FOR BACK TO BACK IN LOWBALL

Hanh Tran has the chance of history in the $1,500 Limit 2-7 Lowball Triple Draw event, after winning the same event last year. The Austrian player has the chip lead with 457,000 chips, Tran’s closest challenger being Jared Bleznick with 449,000. Interestingly, of the 17 remaining players, Tran will sit two seats away from third-in-chips  Frankie O’Dell, who has 436,000 and already has a WSOP bracelet in the bag for this series in the $10,000 Omaha Hi/Lo Split event, winning $443,641 in the process.

From the field of 139 entries, Hanh has looked like the man to beat from the off and will be fighting hard to go back-to-back. But he won’t be the only one, battling against players such as David Bach (415,000), Benny Glaser (332,000) and Daniel Strelitz (166,000), with both the latter two players already WSOP event winners this summer too.

THE $1,000 Pot Limit Omaha event has just five players remaining, and among them, it is Luis Zedan who’ll take an impressive chip lead into the final with 15,670,000 chips, compared to the short-stack of British pro Sam Razavi’s stack fo just 1,050,000. But with the huge field of 1,526 players whittled down to just five hopefuls, anyone can still win because, in PLO, anything can happen.

German professional Anton Morgenstern went into play as a huge stack, but Zedan took him out of the reckoning to set the tone for a day of fast-paced crazy action that was a selling point for mixed games to be added to any player’s poker schedule, whether as a fan or at the felt.

Second-in-chips Thida Lin (6,190,000) got to that total when she saw her pocket aces beat Razavi’s same hand by flushing him on the river, and Razavi has work to do. He’ll do it fearlessly, hoping to outlast the other four final table players to go one better than his previous World Series result, finishing runner-up for the bracelet before.

KOPPEL IN THE RUNNING TO BE MARATHON KING?

Jared Koppel leads the final six runners in the $2,620 Marathon event, with 11,700,000 in chips. Koppel has a big lead, too, holding just under 100 big blinds with just five players to outlast. Dong Sheng Peng is Koppel’s nearest challenger with 5,800,000, but they have under half of Koppel’s stack.

Day 5 started with 16 players, but by the close of play, Koppel had delivered some of those names, and he has put himself in pole position to win the bracelet when play resumes on the

OTHER EVENTS IN ACTION

Former British poker professional Sunny Chattha leads the $1,000-entry Double Stack NLHE event, and is top dog after Day 1, having seen the field reduced from 2,944 to 1,170 players. The Manchester United superfan and popular player back in London will be looking for his first WSOP bracelet in the event, but has cashed exclusively in Las Vegas since returning to action after a four-year hiatua between 2014 and 2018. Chattha has already cashed in this year’s Millionaire Maker, and was followed in the chip counts by Arianna Son (424,500), Diogo Veiga (297,700) and Argentinian pro Richard Dubini (170,000).