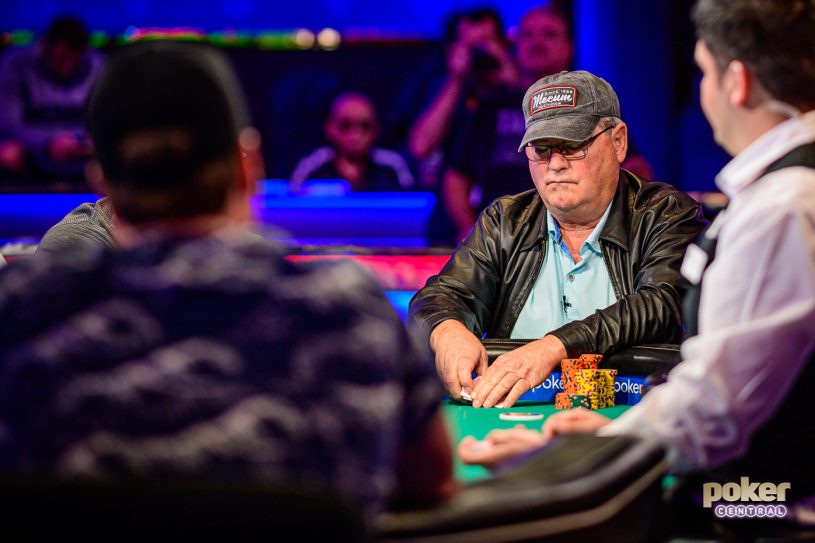 Jim Bechtel won the no limit 2-7 Lowball Draw Championship after waiting for the longest gap between bracelets in World Series of Poker history. Having won the 1993 WSOP Main Event, Bechtel overcame Vince Musso heads-up to claim his second bracelet over a quarter of a century since his last, wrapping up the win for $253,817 in the process.

With Jean-Robert Bellande creating many of the headlines by leading into the final, Bechtel had snuck in quietly and continued his work under the radar, watching as both Bellande and another former overnight chip leader in the event, Brazilian player Pedro Bromfman, fell. Four-time WPT Champion Darren Elias looked like he might be a big threat when play was three-handed, but the two older players, Musso and Bechtel, duked it out until the former Main Event winner prevailed.

Jorden Fox won his first-ever WSOP bracelet and celebrated long into the night with his family on the rail as he defeated the Double Stack final table. The pivotal hand was when he was all-in with ace-queen against the professional player and former WSOP bracelet winner Jeffrey Smith’s pocket aces, and both flopped and turned a queen to overtake him.

It would be Jayachandra Gangaiah who made it to heads-up, but Fox was too wily for him and claimed the gold bracelet for the first time in his poker career despite several previous deep runs at the World Series, including in the Main Event.

Fox, whose winnings now leap above the $800,000 mark, will be looking to go deep in the WSOP Main Event again, especially with his family all playing poker too.

With just six players remaining, the Millionaire Maker is one day from crowning a champion. After almost a week of thrilling action, there are two big chip-stacks at the final table, with Kazuki Ikeuchi holding a slim lead over Cory Albertson. Behind those two chip leaders, however, Lokesh Garg, Joshua Thibodaux, John Gorsuch and Vincas Tamasauskas have between 18 and 24 big blinds to play with. It’s going to be an action-packed final table and you can see all the action live by keeping it locked to PokerGO.

WSOP Player of the Year frontrunner Dan Zack, record bracelet winner Phil Hellmuth and 2018 POY Shaun Deeb all bagged chips on yet another busy Day 1 in this all-action, 90-event World Series of Poker. With 2,479 entries, Event #28 welcomed players of all levels who were prepared to put up the $1,000 buy-in. With a starting stack of 20,000 chips and a 40-minute clock, there was no hanging about and the money bubble burst close to the end of the day when 372 made a profit on their investment.

BOUKAI AND EVANS WILL RETURN TO FIGHT FOR EIGHT GAME BRACELET

Rami Boukai and John Evans will face each other for a heads-up closer as they battle to bink the Eight-Game WSOP bracelet tomorrow after outlasting a final table that featured Chris Klodnicki, who busted just before close of play. Other big names, including 2018 event winner Philip Long, also made the final table but missed out on the heads-up duel for the gold, including Allen Kessler, who has 74 WSOP cashes without ever having won a bracelet. Get ’em next time.

Michael ‘The Grinder’ Mizrachi has a powerful lead in the Seven Card Stud Hi-Lo 8 or Better event after piling chips onto his mountain during a rush late on during Day 2. Other players who bagged up at the end of the night included Robert Gray (510,000), Jason Daly (483,000) Michael Sopko (391,000) and 2019 WSOP bracelet winner Yuval Bronshtein (70,000), but many notables fell by the wayside, including Barbara Enright, Steve Zolotow, Jeremy Heartberg and Dave Alfa, who all left the action near the end of the day.

In other events, Corey Wright took the lead on Day 2 of the $600 PLO Deepstack event with 12 players heading to a final day, ending the action with just over 16 million chips. ‘Captain’ Tom Franklin bagged up 9,150,000, while Florian Fuchs is Wright’s nearest challenger with a dozen players remaining, as he will return to 12,800,000 chips when the final day commences.