You are here
Home > News > WSOP Player of the Year Race: Dan Zack Back Up Top, Ari Engel Surges After Maiden Bracelet Win 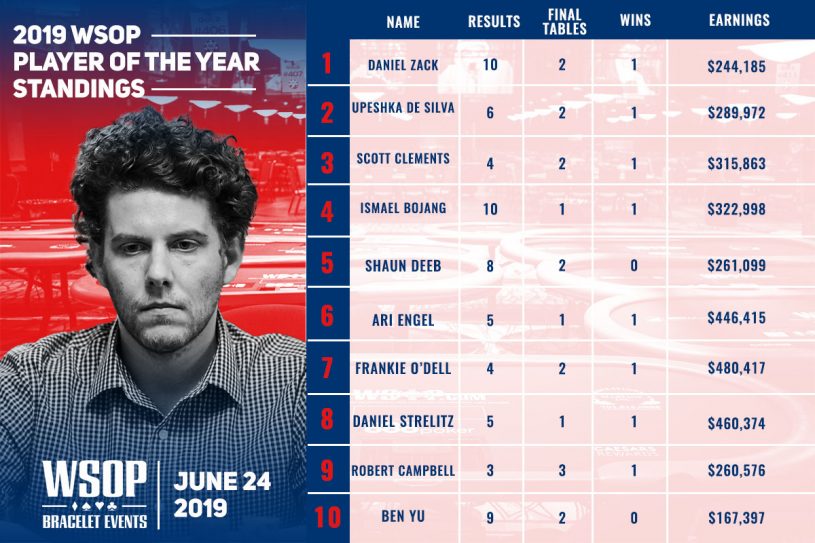 Ari Engel jumps into 2019 World Series of Poker Player of the Year contention with his first bracelet win.

He had the lead after 25 events, lost it to Upeshka De Silva for a few days, but Dan Zack is back in the 2019 World Series of Poker Player of the Year race lead with 49 events in the books. There are 40 more events left to be finished but the picture is becoming more and more clear by the day as big names are floating to the top. A big event starting today is the $50,000 Poker Players Championship that should draw all the big Player of the Year contenders.

Zack made the final table of the $2,500 Mixed Omaha/Stud Eight or Better event where he placed fifth for $43,950 to retake the lead. In total, Zack now has 10 cashes, two final tables, and one bracelet win this summer. The biggest movers this week are Ismael Bojang and Ari Engel. Both gentlemen won their first-ever WSOP gold bracelet after many years of trying. This summer, Bojang already has 10 cashes while Engel now has five.

For some perspective on the race to date, the WSOP Main Event is only worth 1,700 points if the event gets 8,000 players. This means that players looking to overtake Zack need to get their grind on and string together more results to sneak up on him.

Contenders Outside the Top 10

Stay tuned to Poker Central for almost daily updates of the biggest movers on the 2019 Player of the Year race. Watch the final table of the $10,000 Pot Limit Omaha event on PokerGO on Tuesday and the $800 Deepstack event on CBS All Access on Wednesday.