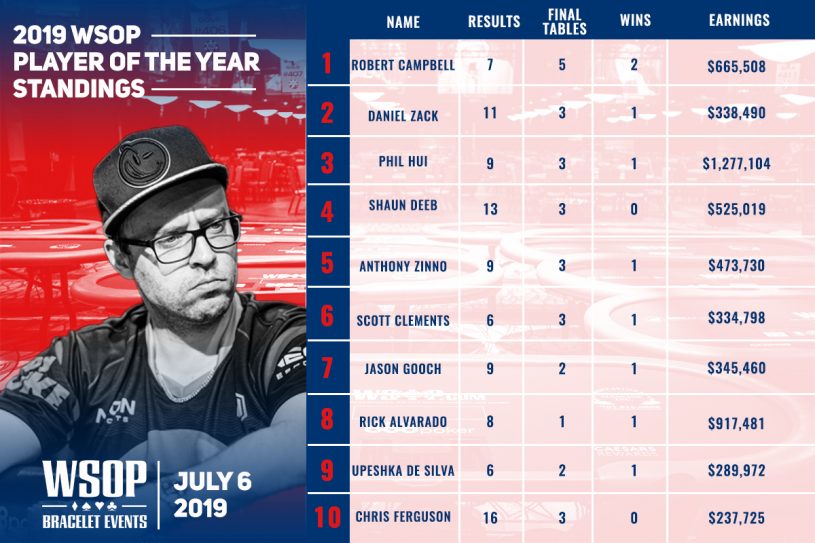 Robert Campbell became the first two-time bracelet winner of 2019 and he took the POY lead.

The 2019 World Series of Poker Player of the Year race has been largely dominated by Dan Zack. Aside from a three-day stretch where Upeshka De Silva took over, Zack has been in the lead since winning his first career bracelet back on June 1st. But now there’s a new Sherrif in town and he’s making a strong case to take it down as Robert Campbell won his second bracelet earlier this week.

The 2017 WSOP POY winner Chris Ferguson is one of the two new names on the list this week as his 16 cashes and three total final tables put him in tenth place overall. With the Main Event in full swing and plenty of other bracelet events still on the calendar, there are about 16 players within one outright win of overtaking the lead pending the event and its field size.

Daniel Negreanu is one of the players outside of the Top 10 who’s still within striking distance. Sitting in 17th place, Negreanu is slotted in just behind other high-volume pros such as Jon Turner, Daniel Strelitz, Rich Zhu, Calvin Anderson, Ben Yu, and Ari Engel. All these players still have plenty of chances to overtake the Aussie but for now it looks as though Jeff Lisandro might get a successor.

Want to keep track of all that’s good in the World Series of Poker Player of the Year race? Stay tuned to Poker Central for more coverage and watch all the action on PokerGO and CBS All Access.