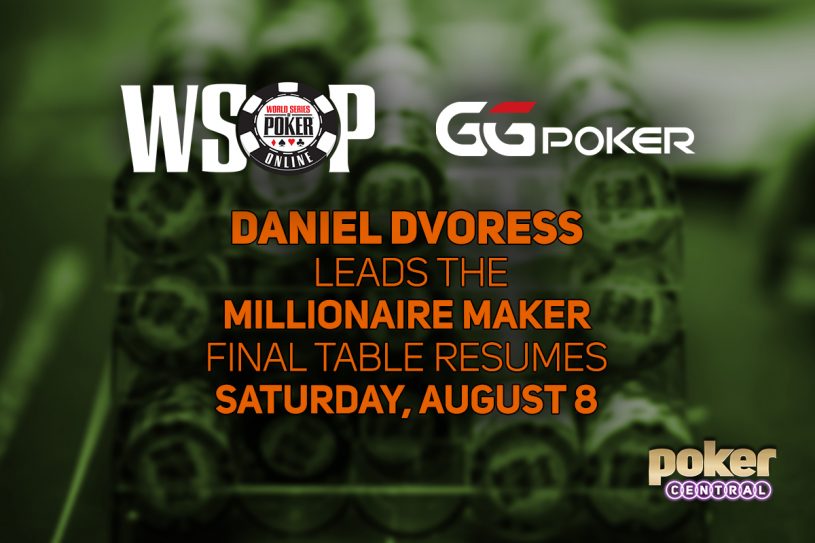 The 2020 World Series of Poker Online on GGPoker continued Sunday with two WSOP bracelet winners being crowned, and one final table reached. Event #48: $1,500 MILLIONAIRE MAKER played down to a final table, and the nine players will go on a week-long break before concluding play on Saturday, August 8, at 2 p.m. ET.

The Event #48: $1,500 MILLIONAIRE MAKER attracted 6,299 entrants that would create a prize pool of $8,976,075. Holding the chip lead is Super High Roller Bowl Bahamas champion Daniel Dvoress. The final nine players are all guaranteed $107,671 in prize money, but awaiting the eventual Event #48 champion is the coveted WSOP bracelet and $1,489,289 in first-place prize money that also has an added $15k WSOP Europe package.

The resumption of the $1,500 MILLIONAIRE MAKER final table will resume on Saturday, August 8, at 2 p.m. ET, with a live stream on PokerGO starting at 2:30 p.m. ET with cards up and commentary.

Mike Watson was the biggest name at the final table along with Paul Teoh and Joseph Orsino, and after roughly three hours of play, it would be Teoh defeating Michelle Shah heads-up to collect the $82,202 first-place prize.

Teoh has amassed over $153,000 in lifetime tournament earnings – and with this win – he becomes the third WSOP bracelet winner from Malaysia joining Chin Wei Lim and Junzhong Loo.

Lithuanian Vladas Burneikis entered the final table as chip leader, and he would ride that to his first WSOP bracelet after he defeated Pierre Merlin heads-up to win the $192,523 first-place prize plus an added $15k WSOP Europe package.