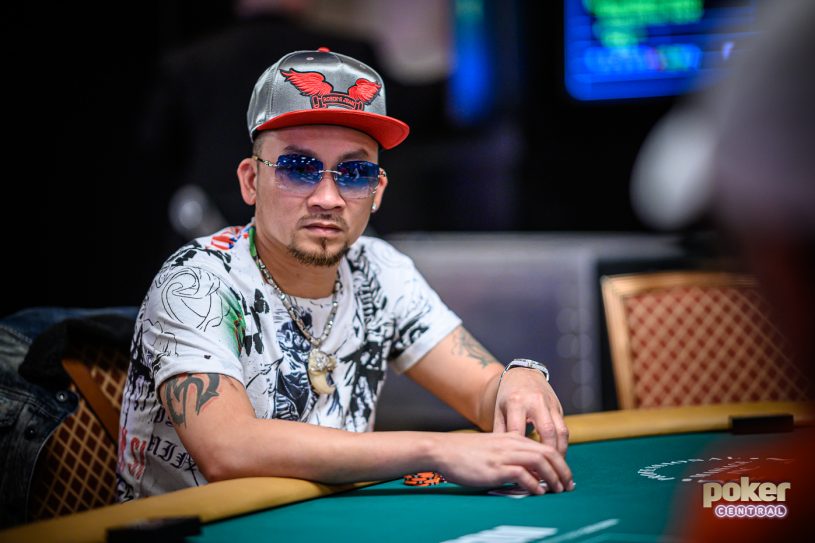 Qui Nguyen on his way to bagging another huge Day 1 stack in the WSOP Main Event.

After a superb day of action at the felt, the first day of the 2019 WSOP Main Event is in the books, and with just under a thousand players surviving from a total number of 1,335 entries, Bryan Campanello ended the day with the chip lead with 417,500.

One of those days where even when I played terribly things worked out. 417.5k in the bag for day 2.

Campanello may have been modest about his play, but he’s piled up a huge stack for the Day 1b players to attempt to overtake. Day 1a produced some other big names and stacks to match. Raymond Rice won a very late hand with pocket aces for a pot worth over 150,000 to jump to 335,000 chips, good for second place at the end of the action. But there was a former Main Event Champion who also threw his colorful hat into the ring for being the star of the day, the 2016 WSOP Main Event champion Qui Nguyen, who totalled 180,500.

There were some big names who starred on Day 1a , and these included the former WSOP Europe Main Event winner Jack Sinclair, who finished the day with 153,800. Fellow British player Martins Adeniya gained even more ground on his opponents, stacking up 165,000, while one of the leading contenders for glory this summer, Alex Foxen put even more in his clear plastic bag, ending Day 1a with 173,200.

Legendary WSOP 2003 World Champion Chris Moneymaker ended the day with 104,000 chips after experiencing a day of swings in the tournament he has come to define. Having entered the 2003 event on the back of an $80 satellite online, Moneymaker made history by going on to win the $1million top prize that year, carving his name into history and helping to trigger the first poker ‘boom’. Moneymaker dipped well below his starting stack, flew up to 120,000 and levelled out, finishing on 95,000.