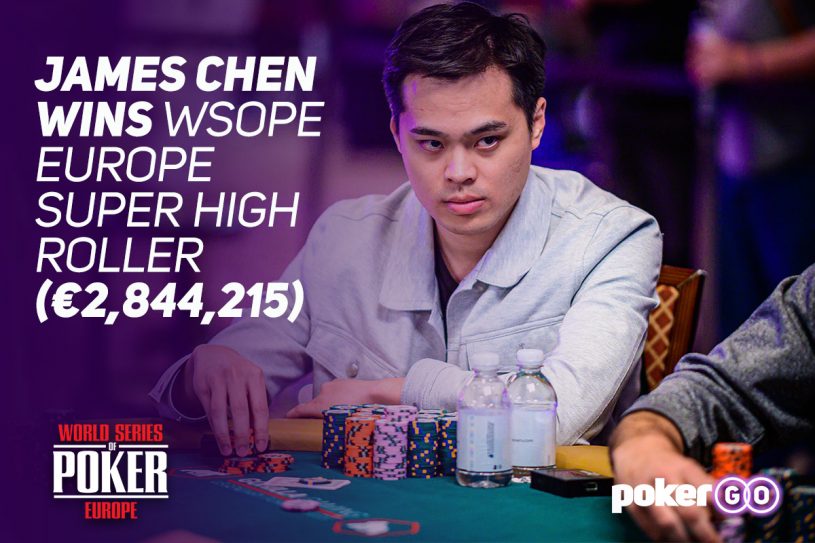 The first big bracelet of the 2019 World Series of Poker Europe has been awarded to James Chen who beat a field of 30 entrants on his way to a massive €2.8 million payout in the €250,000 Super High Roller event! Heads up, Chen beat Chin Wei Lim from Malaysia to capture the first-ever WSOP gold bracelet for Taiwan.

Relive the entire final table on PokerGO right now. Check out the upcoming PokerGO events in the Live Events tab.

After big names such as Phil Ivey, Rainer Kempe, Richard Yong, and Paul Phua fell short of the final table, the action kicked off today with Dominik Nitsche in the lead. Nitsche, however, ran into kings twice before he became the first player to bust out at the final table.

Nothing went right for @DominikNitsche and now the €250K Super High Roller is on the bubble! 😱@WSOP Europe is live on PokerGO: https://t.co/5rUlItuiNK. 🇨🇿 pic.twitter.com/KhYNog4yVr

Next, it was Ryan Riess who busted as the 2013 World Series of Poker Main Event winner was shown the door by Tony G who claimed to be “The Captain” from there on out.

Cary Katz was the first player to bust in the money as he took home €538,722 for fifth. Katz busted holding jack-six suited against Tony G’s king-queen on a king-jack-nine flop and found no help on the turn or river. Despite holding the chip lead in numerous spots, G was next to go in fourth place for €799,045, the biggest score of his career.

On his final hand, G got his money in with a straight draw against James Chen’s top two pair for a massive pot. Chen’s two pair held up and the three-handed battled commenced as he held a massive lead.

Christoph Vogelsang has quietly been racking up chips and took over the chip lead three-handed but it was no recipe for success as he busted in third place for €1,185,161. Vogelsang busted with fives against ace-ten suited of Chin Wei Lim as the latter started the heads-up battle with a 2:1 disadvantage despite winning this big pot.

Small ball was the name of the game heads up but ultimately Chen wore down Lim which resulted in the final hand as seen in the clip below.

World Series of Poker Europe coverage continues on PokerGO with the final table of the €25,000 Short Deck event which kicks off at 11:00 a.m. ET. New to PokerGO? Subscribe right now.