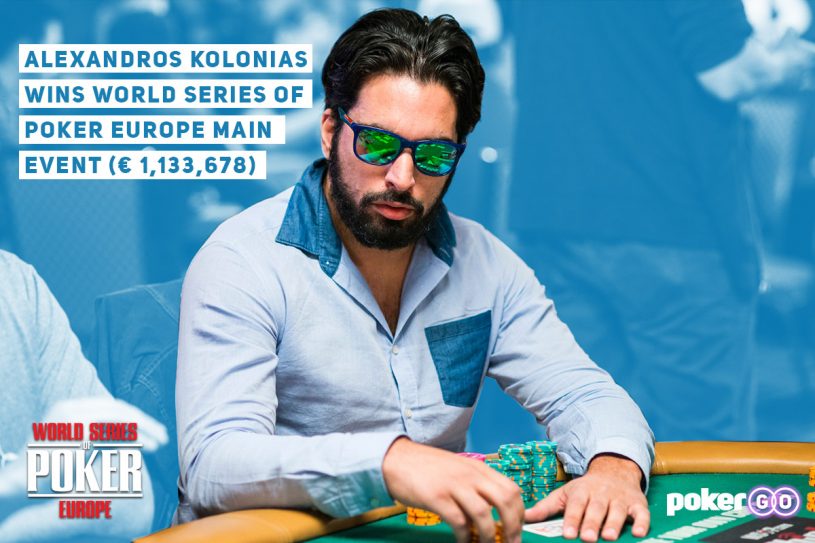 Alexandros Kolonias won the biggest tournament of his life taking down World Series of Poker Europe.

After a rollercoaster final day of action in Rozvadov, it was the Greek player Alexandros Kolonias who was the last man standing as he won the World Series of Poker Europe Main Event for €1,133,678 and the fabled WSOP bracelet.

Seeing out the tournament, Kolonias overtook the final table chipleader, Anthony Zinno to deny his more experienced adversary a third bracelet, while Dario Sammartino again fell just short of a Main Event victory after reaching both this and the WSOP Main Event final table in Vegas in the summer.

With the final day starting with just six players in action, the first player to leave the party was Swedish player and former WSOP bracelet winner Rifat Palevic. He made a play blind-on-blind with king-deuce, but Anh Do held pocket queens in the big blind and that was that for Palevic.

Do didn’t see his new chips bolster his stack for long, and in unlucky circumstances. Things had looked rosy for Do when his ace-jack spiked Anthony Zinno’s pocket kings, and Do had the best of it when all-in against WSOP Main Event runner-up Dario Sammartino. But although Do’s queens were way ahead of Sammartino’s pocket jacks, the fates weren’t with him and the Italian was able to find a miracle to survive.

While Do, who won his ticket playing a €230-entry event at King’s Casino in the German Poker Masters, didn’t last much longer, the same would be true for Sammartino. A pivotal hnad between him and fellow short-stack Zinno went the way of the American when his king-ten flopped top pair against Sammartino’s ace-jack.

Soon after, Sammartino got it all-in good, with ace-king against the jack-ten of Claas Segebrecht. However, a jack on the flop and no further help for the Italian saw his day end without him going that one step further than in the Vegas-based Main Event.

While Dario Sammartino’s exit might have encouraged Anthony Zinno, the two-time WSOP bracelet winner wasn’t able to use his experience to control three-handed play, after more bad luck saw him crash out in third place.

Zinno’s earlier loss with pocket kings had robbed him of the momentum he entered the day with, and the vibrations of a seismic moment for his chances rippled around Rozvadov long after his crucial hand.

While chips passed between the three players for hours, a lot changed when Zinno’s shove with pocket threes was called by Kolonias with a suited ace-jack and an ace landed on the flop. Zinno had two streets but only one out and it never came to leave him down to just three big blinds.

To his credit, Zinno span that up into twenty bigs as a comeback looked on. But the truth is, the lead was never his again, and his eventual bust-out hand saw his miserable fortunes at the final table continue to the end, his ace-nine overtaken on the flop by Kolonias’ off-suit jack-ten, with all the chips committed pre-flop. Zinno couldn’t catch the ace he needed and departed before heads-up.

While neither Zinno or Sammartino could seal the victory, the accumulated points for both men mean that if they were to win the final WSOPE Event, The Colossus, then they would win the WSOP Player of the Year as long as messrs Daniel Negreanu, Shaun Deeb and Robert Campbell don’t grab the points to outstrip them on the home straight. Here’s how the race for that Player of the Year title currently looks with just the solitary event remaining:

Heads-up, stacks went back and forth for some time as play went into the night. But as the midnight hour approached, a huge coinflip decided the title.

With Kolonias sealing victory on that blank river, he became the seventh player from Greece to win a WSOP bracelet, but the only one to bank a seven-figure score in the process. With the final nine players representing nine different countries, a truly multicultural celebration of poker saw a Greek hero prove that the Germans don’t always win, with Claas Segebrecht falling one place short in his bid to emulate his countryman Hossein Ensan.

Here are the final table results.

Stick with PokerGO for the conclusion of this fabulous 50th World Series of Poker and catch all the action 24 hours a day, seven days a week by subscribing today.