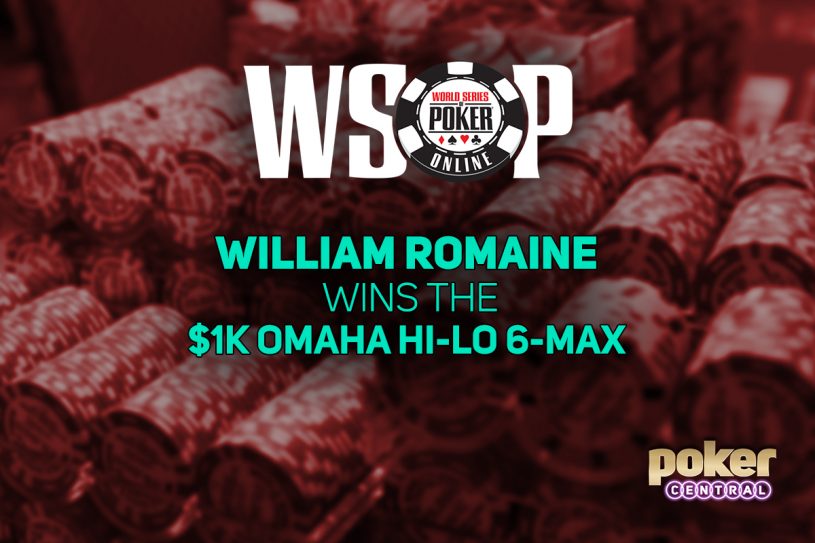 The 2020 World Series of Poker Online continued on Tuesday with Event #28: $1,000 Omaha Hi-Lo 6-Max attracting a 525-entrant field which created a $498,750 prize pool. Connecticut’s William “SlaweelRyam” Romaine would navigate his way to his first WSOP bracelet, along with $110,673 in first-place prize money.

Vasu “kheescoppy” Amarapu entered the final table as the chip leader as Gabriel “NJ_FittyFish” Ramoswould be the first to go when he ran into the bigger pair of Romaine and was unable to improve. Kyle “Ksparks740” Sparks would fall in fifth-place when he was all-in preflop against two players, and when down to heads-up on the turn, his bottom pair would fail to improve against the nut low and better pair of Stephen “Chippingggup” Tyson. Tyson would be the next to be eliminated when he was all-in with the high against Romaine’s low, but when a straight came in on the river for Romaine, the tournament was down to the final three.

Amarapu would commit holding both low and high draws against Romaine’s top pair, and when the river bricked, Amarapu exited in third as Romaine entered heads-up play with the chip lead over Mark “victb” Ioli. The penultimate hand saw Ioli fold the river on a board with no low to be left with just under three big blinds. The next hand he was all in on the flop with second pair against the top pair of Romaine, and when no help fell for Ioli, he was eliminated in second-place as Romaine was crowned the Event #28 champion.

Two weeks ago Romaine finished runner-up to Michael Lech in Event #13: $1,500 High Roller Freezeout for $110,979. Last night, Romaine would pocket basically the same amount of prize money – but would add his first WSOP bracelet to the collection. Along with four other WSOP Online cashes, Romaine has doubled his live tournament earnings that sit just north of $234,000.