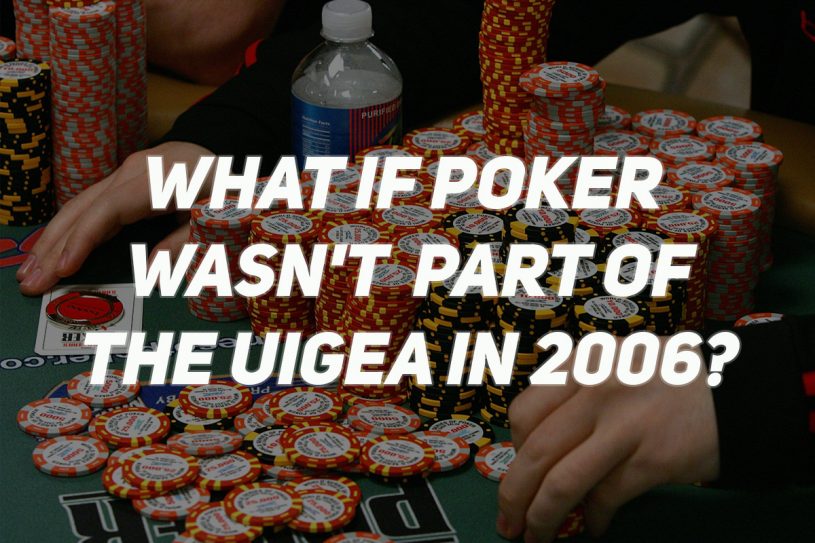 The UIGEA halted the growth of poker all over the world but what if it had never happened? (Image: Getty)

Five years before Black Friday shook the poker world, things had already got tough on poker.

In 2006, three years after the ‘Moneymaker Effect’, there were 8,773 entries into the World Series of Poker Main Event. Jamie Gold won what is still a record first prize for the Main Event at $12 million. Poker had never been bigger.

It would never be as big in the years that followed, either, thanks to the Unlawful Internet Gambling Enforcement Act (UIGEA) that was included in the SAFE Port Act on the final day of Congress. When the elections were over, George W. Bush signed the bill and made it a law on October 13th. It would make it hard for poker to ever be as big again. But what if poker had been removed from the act in its entirety? What if poker wasn’t in the UIGEA in 2006? It’s easy to forget that if it wasn’t for the UIGEA, Black Friday would’ve likely never happened or at least not in this fashion.

There can be no doubt whatsoever that in 2006, the World Series of Poker was bigger than ever before. Moneymaker may have had his effect, but he bested a field of 839 to win a million. Jamie Gold was able to cut a path through ten times as many players just three short years on. The growth of poker, now something that we all collectively work incredibly hard to maintain, was a runaway train with an unstoppable momentum thirteen years ago.

With live attendances stretching the limits of casinos and forcing a move from the Horseshoe to the Rio a year earlier, online poker was booming too. Sponsorships were commonplace, with the best players patched up like a pantomime outfit and the WSOP Main Event final table looking more like an explosion of internet pop-up adverts than a game of poker.

It was only two months after the champagne flowed for Gold that the party was ended in even more dramatic fashion. The UIGEA was included into the SAFE Port Act and signed by President Bush, which forced publicly traded companies such as partypoker to leave the United States.  The poker boom was over, and the next year, in 2007, there were only 6,358 entries into the Main Event.

With no UIGEA to restrict poker and a burgeoning player pool, where would attendances at the WSOP have gone next? In a word, up. A year later, we might have seen the Main Event top 10,000 entries. Could there have been $15 million up top? Who knows what kind of publicity would have given to what was already becoming America and the world’s fastest-growing pursuit?

With more players at the poker tables, both live and online, we would undoubtedly have seen poker companies mushroom around the world, but particularly in the United States. Full Tilt had been born in 2004, and it would surely have been followed by many more imitators had the UIGEA not been passed and companies hadn’t pushed publicly traded companies out.

Poker would have got even bigger. But what would have been the result of that?

More poker companies would mean more poker players. And while that is, generally speaking, a good thing, it would also mean that the game would advance even quicker to where it is right now. As Doyle Brunson once said, “Poker is a hard way to make an easy living,” and with a much larger player base that was set to keep growing the evolution of the game would’ve likely also sped up.

Also, if poker was making even more money for proprietors, would Black Friday ever have even taken place? That, maybe, is a separate question, but with more money in the pot, the pressure may have been on 2011’s President Obama to make a different call. And when there’s more money involved, we all know that politics can be influenced and without the UIGEA there might’ve been more room for that.

Poker, like the habits of the youngest players it so often inspires, often needs reigning in. Many of the rules of the game do exactly this; as players develop different angles to take, so the rulebook is used to smooth those edges out and keep the game fun for all.

There have been several stumbling blocks that poker has needed to overcome since it first came to America, and the UIGEA and Black Friday are just two of them. Under-table cameras were originally seen as a threat to the game just like HUDs have been identified as the same in the online game. Poker has negotiated a journey either over or around such obstacles.

Perhaps it is poker’s constant ability to work around restrictions that has molded it into the incredible game it is today, existing both within tight laws, but with so much flexibility and choice across the globe. The future for poker is bright and with state-by-state legislation slowly taking shape we’re trending towards eventually eclipsing the pre-UIGEA numbers in a regulated market.

There’s no end of choice if you enjoy top-level poker on PokerGO. Subscribe today and get 24 hours a day access 365 days of the year, including the latest Poker After Dark reboot episodes and live streaming from tournaments exclusive to Poker Central fans, such as the forthcoming Super High Roller Bowl.